Anglade and the great Belgian escape

Pieyre-Alexandre Anglade is the perfect example of what the Macron movement En Marche is trying to achieve: gathering young europhiles front stage. After working at the European Parliament, he was chosen as a candidate for En Marche, notably for their 4th constitutency of French citizens abroad during the Belgian legislative elections. It was all uphill from there.

"I was just there. We were distributing flyers in the market." Pieyre-Alexandre Anglade, candidate for the En Marche! movement in the constituency of Benelux, was a busy man two weeks ago. During the first round of legislative elections in Belgium, which took place on 3 June, he had to work towards convincing the people. But he didn't have to work too hard. In Brussels, Emmanuel Macron was ahead of the game for both rounds of the French presidential elections, with 38.8%  for the first and 89.6% for the second. But Anglade is not Macron, he is "Just a normal guy. But I have ideas for my country."

The 30-year-old man starts with what's necessary: his look. Pieyre-Alexandre Anglade arrives at the terrace of a small café in the Flagey neighbourhood in Brussels, wearing jeans, a t-shirt and trainers. He is blond, clean shaven and is not entirely unlike Macron himself. The candidate is a perfect stereotype of the political movement: young, urban and international all at once. Merely the fact that his name was listed in the legislative forms says a lot about the party: "I am living proof of the confidence that Macron has instilled in people invested in [En Marche]," he says. "The fact that I was mandated, it's by choice and not by chance. I was amongst 20 other candidates and they chose me." After all, the inauguration of a "normal guy" is completely in line with Macron's image. For France's legislative elections - of which the first round has already taken place - it's obvious that many candidates are born from civil society. They don't necessarily have a lot of experience in politics, like the new Minister of Culture Françoise Nyssen or Laura Flessel, the Minister of Sports. 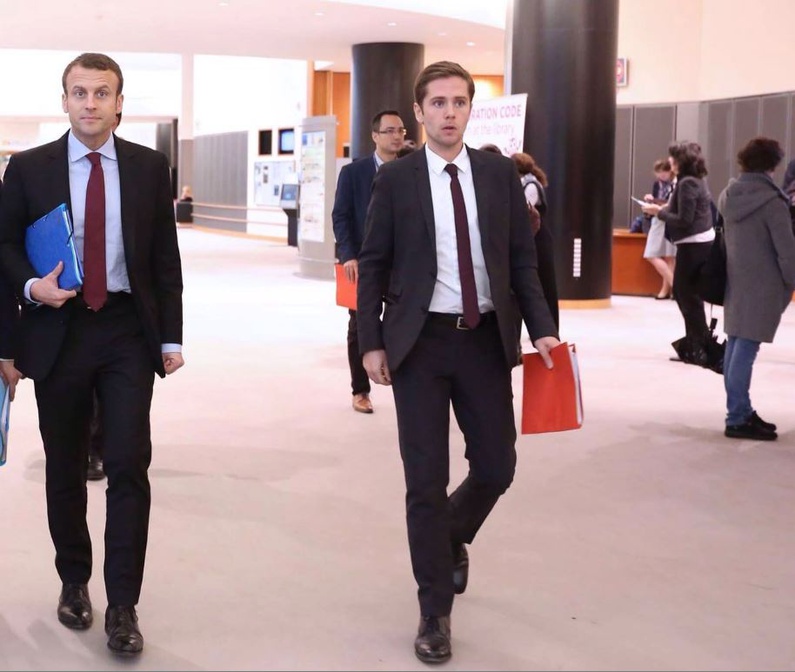 Anglade took his leap of faith in 2015. He was a parliamentary assistant for five years, and decided to dive head first into politics by writing a letter directly addressing Macron who was Minister of the Economy at the time. The goal of the letter was to express his opinion on the political climate in France. "The current political re-shuffle in Europe is characterised by growing far-left and far-right movements. France is not exception," he wrote. The President of the Republic did not answer directly, but admitted being "interested" by this approach. So when Macron left the goverment to kick-start En Marche, he nominated Anglade as head of the local Brussels committee. Under one condition: En Marche Brussels will not become a European think-tank. In other words, they will not give advice as professionals with exptertise in the European Union. Anglade adds: "Apart from that, I was free to manage things the way I wanted to." The voices of citizens and their requests are meant to be at the heart of all discussions. At the beginning, it wasn't easy. The first time Anglade held a meeting it was in the bar of the Quartier Léopold, close to the European institutions. It almost flopped. "We were about 30 or 40 people, and it was really warm," he recounts. But the young candidate wasn't going to let a hot flush win him over. "Today, there are over 3000 members of En Marche in Belgium."

His journey almost looks accidental. Nothing nor nobody would have destined him to the Assemblée nationale. Despite his look of top of the class, "PA", when he was a teenager, was an average pupil. He got his high school degree (French Baccaulauréat) "with 10,2 on average". Then, the young student started a Bachelor in History at the Sorbonne University (Paris) : History was the only subject he was interested in. He realised the luck he had to study in such institution, thys he got more and more involved. He spent a year in Erasmus in Glasgow where he strengthened his personality and his English. Anglade then continued to study international relations and did his Master's degree on European matters at the Institute of Political Studies in Strasbourg. In 2010, he joined the MEP Nathalie Griesbeck, then managed the team of the Czech Pavel Telička (ALDE), one of the 14th Vice-Presidents of the European Parliament. In the hemicycle, he starts to make himself known; enough for one of his colleagues to extend the sportive metaphor to Spartan Zizou, hison football team at the Parliament: "he is technical, fast but underneath his easy-going appearance, he is aggressive. His temper is perfect for his political path, he will very probably take punches at the beginning, but it won't take long before he'll fight back."

But beyond destiny and his look of top of the class, how does Pieyre-Alexandre Anglade think he is going to extend Emmanuel Macron's projet ? By doing what he learnt to do ! The young candidate intends to import in Paris the good practices of the Brussels Parliament, which is "particularly in advance compared to the Assemblée nationale". "At the EP, the representatives are present", he says. "So I will be a present representative and a representative whose mandate will be the only activity", he continues.

His other secret weapon: "the culture of compromise, which is born from the impossibility to reach a clear majority at the European Parliament". He wants to spread this vision within the French Parliament. This practice could also be useful in this particular situation of reconstruction of political balances.

Regarding his political programme, the project of candidate Anglade is clear. He wants to reproduce what is making En Marche! work. "Citizens' network", workshops, public debates, meetings... the aim is to bring citizens' expectations to the representative. Anglade shows more a vision, future working methods than a detailed range of promises, just like Macron did. Nevertheless, the wannabe representative has some fixed ideas : support programs for families with disabled people, simplification of administrative paperwork, especially regarding "portability of rights", which is a real problem for retired expatriates, and cooperation between France and Benelux on nuclear safety and the fight against terrorism. 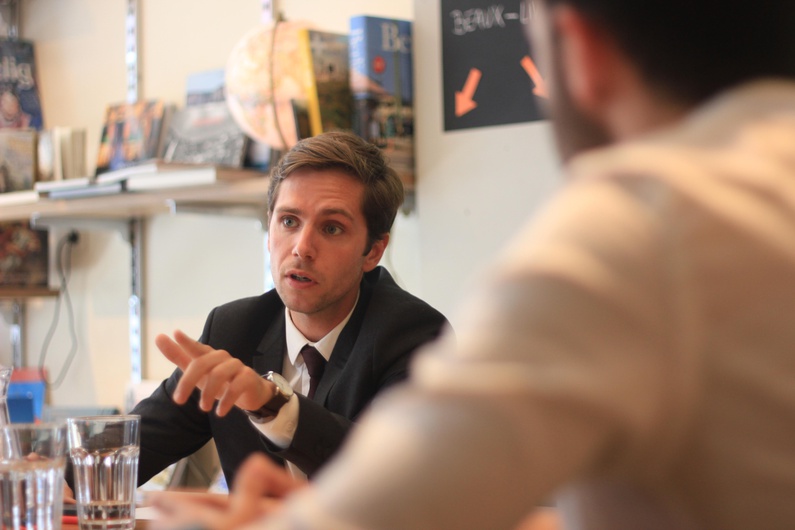 Even if he still has some doubts on which parliamentary commissions he prefers, Anglade is certain of one thing: he will not be "a representative like the others". Almost all European institutions are located in his constituency, from Brussels to Luxembourg: no doubt he will develop his European notoriety. This will definitely give a significant weight to his fonction of representative. Moreover, he is part of the Presidential majority, he is very active in the Brussels committee of En Marche and he already know well two of the eighteen members of the government. "Just this morning, I received a SMS from Sylvie Goulard", he said. "The government will listen my opinion. Or in any case, I would have many ways to express it".

The Brussels' microcosm enjoys the possible victory of "one of them", of an expert of "European bubble" and its institutions, rules, issues. But their leader considers that "nothing must be taken for granted". The last surveys, on the other hand, trumpet: Anglade is well ahead with 42% of votes. According to surveys, at the second round, he might be against his colleague from the European Parliament, Sophie Rauzser, the young political advisor of France Insoumise (far-left political movement), who would take the second place with 19% of voting intention. But Anglade remains prudent: "nothing is won today. It is when we think it is done that we make a mistake"

In only one little month, Pieyre-Alexandre Anglade went from complete young stranger to serious favorite candidate for thee legislatives. At least, he will remember one thing from this blitz: "there is place for young and dynamic people that are looking towards the future and the world. We must take it, we have to push the others a bit, but it exists". We will know later if the red-velvet seat from the Assemblée nationale will not be a mirage.