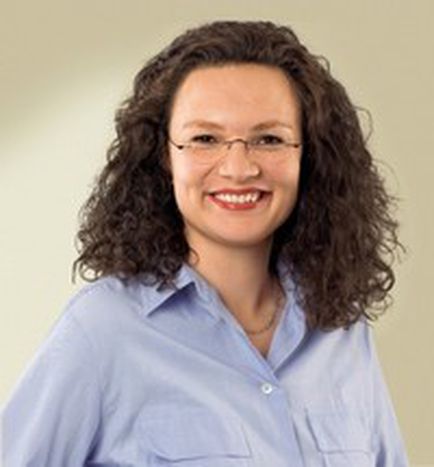 The young left-wingers in Germany have someone at their helm. Andrea Nahles, 35, is a political obstructionist with a seat on the governing board of the SPD (Social Democrat Party). She puts her ideas forward with determination, in Germany and the EU.

The office on the first floor of the glass building which houses members of the German Parliament, near the Reichstag in Berlin, is bursting at the seams. Only three coats fit into the wardrobe, but for that there is all the more space for papers on the desk. The view from the window is not of the winter-wonderland of the frozen Spree river, but of more jam-packed offices.

No whispering behind peoples backs

The SPD super-woman does not have time for a casual brunch somewhere outside of the office complex. But there is a brief window in her diary for a quick chat. “Coffee?” asks her colleague as she rushes past. Yes, please. And already the boss breezes in. That this woman will roll up her sleeves and get things done is the message conveyed by her handshake. And in the course of the next half hour it becomes clear to me what this lady is like when she is firing on all cylinders.

An unstoppable wave of words washes over me, rough but kind. Her sentences seem to be perfectly constructed; her mannerisms add vibrancy and energy to them. She softens all criticism when her very particular smile crosses her lips, her whole being and presence is captivating. And yet there is hardly anyone else in the SPD who has dared have as many disputes and altercations – publicly aired ones at that – with the larger-than-life figures in her own party than Andrea Nahles. She would rather an altercation, even a public one, than whisper behind someone’s back. Andrea Nahles does not just act contrary to the customs and conventions of her party, she also thinks contrary to the mainstream of the SPD. “Left-wing ideas must gain a better standing and more clout within politics” says the 35 year old. That is why, some five years ago, she founded the “Forum for the Democratic Left 21”, a grouping of young left-wing-ers within the SPD, a group she chairs even today. “It makes sense to organise oneself within the party. That way you have a better chance of being heard and being listened to. The other camps and groupings within the big parties do the same!”

Socially weak does not equate to being a weakling

”Being left-wing”, what does that mean nowadays? Mention the German Linkspartei (Left-Wing Party), made up of the former East German Communist party and the disaffected West German Social Democrats, and you hit a raw nerve with the articulate Andreas Nahles. “The Linkspartei does not have exclusive rights on being left-wing” she insists vehemently, just as I am thanking my lucky stars that my name is not Gregor Gysi, the leader of the Linkspartei in the Bundestag. Nahles is well aware that the Linkspartei considers itself the champion of the weaker members of society. But people do not take the party seriously. “People are not victims! On the contrary – it is from them that the power which shapes and determines society is drawn.” The socially weak are not weaklings for Nahles. Good. But what exactly then constitutes social equality for such strong citizens? “Some [people] do not find the elevator, and so have to take the stairs. We must help people to nonetheless manage the climb upwards.”

Nahles also has some harsh words for the rigorous pacifism of the Linkspartei – she lambastes the propositions being represented in the Bundestag by those on the left as “outrageous nonsense”. Popular, but entirely devoid of reality. “Germany in the 21st century, in and at the heart of Europe, is part of alliances such as the EU, NATO, the UN. This brings with it obligations and responsibilities, and cannot simply be ignored!” Stop! Wasn’t the promotion of peace once a mainstay of the left-wing ideal? Where is the previously stubborn spirit and resolve of the critics of militarism?

Her pragmatism is also clearly shown in situations of internal party conflicts. Though she contributed last autumn to the fall of the leader of the SPD, Franz Müntefering, she does not wish to be crowned Secretary General. Conflict yesterday, cooperation today? No. She places limits and boundaries on the escalation of conflicts. “Whosoever thinks being a battering ram will get you far in politics is naively mistaken.” A friendly smile and the conversation moves on.

Not only at national level has Andrea Nahles perfected the fashionable key skill of networking. Along with the French “Gauche Socialiste“, the young left-wing SPD-ers founded the “European Club”, whose aim it is to establish a “European Republic”. A Europe with strong regions, with a constitution similar to the one proposed, but drawn from a basic principle more socially just than the purely economic orientation of today’s EU. “But it is not exactly helpful, that there are such irreconcilable differences amongst the French Socialists” bemoans Nahles. Until this day she cannot comprehend the Socialists opposition to the constitution. “The French “no” to the constitution was a real blow for us,” she admits. Is a new partner therefore required? “The Poles are important. They could become a strong ally,” she muses, thinking aloud.

For Andrea Nahles, the future of an alternative project for Europe lies in the grass-roots organisations which are spreading like wildfire all over Europe. Only there could the strength necessary to change the current situation develop. It is with good reason that she is a “firmly convicted member of ATTAC”. A European grass-roots revolution? And that with a youth which begrudges the long-term unemployed the possession of a TV? Is that not left-wing utopia? Popular, but entirely devoid of reality?! Of course her generation is “very career-driven, hedonistic, perhaps too “unpolitical” too. We just did not grow up in a highly politicised time like the generation of 1968 activists.” But, says the 35-year old with a glint in her eye - “now we have reached a point at which our generation will show what it is capable of and what stuff it is made of”.

Andrea Nahles decided a long time ago that she wants to take on and accept responsibility – for the Social Democrats in Germany, for the project of the left-wing European Republic, for the establishment of fairness and justice in Europe. Rallying to the call that “This Europe needs to change”. And that change is coming. From the left. From the bottom left-hand corner.