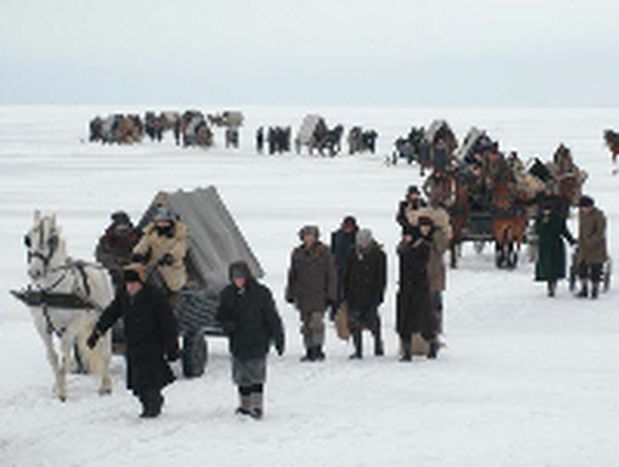 With its astonishing landscape and expert film companies, Lithuania is becoming an attractive destination for the world’s film industry

Poorly dressed refugees carrying their bulky chattels stumble over the frozen Baltic Sea. The group moves slowly westwards, as the desperate and exhausted expellees try to escape from the advancing Soviet troops. Stalin’s armies are about to occupy Eastern Europe. The offensive has caused a mass exodus, with thousands of people crossing the dangerous ice. When the refugees come under heavy fire, people take cover behind the old traps, while others disappear in the dark sea.

Cut. The well-rouged actors relax. People laugh and grab a hot tea to withstand the bitter cold. The temperatures are far below zero, as the crew of the German movie Flucht und Vertreibung (March of Millions) have pitched their tents on the Curonian spit near Klaipeda, in Lithuania.

The film deals with the fate of German families in East Prussia, who had to leave their homes at the end of World War II. Lithuania turned out to be the perfect place for the shooting. “We opted for Lithuania for two reasons. The country offers reliable snow-conditions in winter and the landscape and architecture are still very similar to East Prussia during that time,” explains producer Katrin Goetter.

However, another point finally tipped the scales: “The Lithuanian Film Studios have proved to be a professional partner with a good deal of experience in cooperation with foreign production companies.”

Indeed, co-productions with foreign companies have become a central business for the Lithuanian Film Studios. Ramunas Skikas, managing director of the studios, estimates that about 95 per cent of their films are co-productions with foreign companies. “We can provide many locations producers from abroad are looking for,” he says. “Thanks to Lithuania’s geography, we can easily pretend to be Great Britain or Germany. As Lithuania is still not very urbanised, our country is attractive to people making historical movies, notably to those set at the beginning of the 20th century.”

Falk Schweikhardt, the German producer, director and screen-writer, explained why Lithuania has become an attractive location for international film projects: “Of course, the expense factor is the major reason for foreign companies to come here. However, the low prices are paired with substantial know-how that does not differ much from studios in Germany.”

He highlights that certain criteria need to be fulfilled in order to implement cooperation. “When a movie is basically about the dialogue of a couple of people, it is not necessary for Westerners to produce in Lithuania,” he says. “The film studios are profitable if projects need many extras or extensive stage-setting.”

This was the case for the German film: “We provided extras, props, wardrobe and the set dress for March of Millions,” states Skikas. The Lithuanian Film Studios did the casting for the supporting roles, as salaries for actors in Lithuania are far lower than in Germany. Altogether, “Western European companies can save up to half of the costs when they produce in Lithuania,” reckons Skikas.

The spirit of the present

Apart from their foreign cooperation, the Lithuanian Film Studios produce Lithuanian movies as well. Their latest home production is Raganos ir Lietus (Witches and Rain), a feature based on a novel by Jurga Ivanauskaite.

During the Soviet period, domestic movies were an important means to preserve cultural identity within the Baltic States. The film studios in Vilnius have kept up the Lithuanian spirit. By now, 130 people work for the studios on a permanent basis, and numerous freelancers are hired on a project-by-project-basis.

As the Soviet Union tumbled, the Lithuanian Film Studios were privatised and faced a harsh new existence in a market economy. The existence in a state-controlled economy had ruled out any form of competition; no one was familiar with terms like demand and supply.

However, the Lithuanian Film Studios stole an advance. Skikas has previously worked in the USA and brought with him useful contacts and important know-how.

Skikas is unafraid of competition. “No one in Lithuania and elsewhere in Eastern Europe can keep up with us.”

Only Bulgaria and Romania, “provide comparable high standards at low levels of cost,” says Skikas. “However, as the landscape is rather different in these countries, they basically attract productions that would be interested Lithuania anyway.”

Only Ukraine, with its similar landscape, is a possible threat, says Skikas. But “they neither have the professional skills nor the equipment.”

Looking to the future

Lithuania could soon attract more production companies from abroad. “Hopefully, the parliament will pass a law next year permitting tax incentives for foreign filmmakers,” says Skikas. In his opinion, those subsidies would create new jobs in Lithuania.

Whether the law will pass remains unclear. Nevertheless, the Lithuanian Film Studies are well on the way to extend their capacities. “As soon as possible, we are moving into modern studios in another part of the town. The construction has already started. Our present home is outdated,” complains Skikas, while showing us around. The company is accommodated in a complex in northern Vilnius. Its construction dates back to Soviet times, when digital trick film and animation were unknown behind the iron curtain.

Once they have moved into the new building, the Lithuanian Film Studios are looking ahead: “So far, our primary goal is to acquire more productions from abroad. We are already able to work on four or five projects at the same time,” says Skikas.

As for new projects, Lithuania might again provide the setting for two historical movies: “We are waiting for the decision of Italian and German producers to work in Lithuania. We could realize two more projects if they agree,” says Skikas, adding pragmatically: “In our business, I have learned that you can never be too sure."