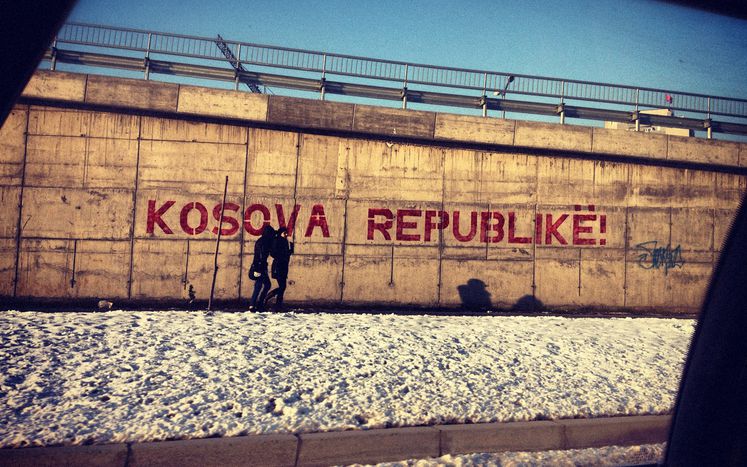 An Exquisite Corpse In The Land Of Blackbirds: Chapter One

In the early 2000s, was Kosovo the site of organ trafficking, carried out by guerillas on Serbian prisoners? Over the past decade, more than six inquiries have looked into this gruesome crime; a succession of investigations that have revealed more questions than answers. Without corpses or witnesses, the case is interfering with the recognition of the country's independence.

"Who does he think he is, James Bond? What an ass!" The first time that I saw Ilir, he was strolling towards security at the airport in Vienna with the swagger of a big shot. Black jacket, faded jeans, shoulders pushed back and chest puffed out. Not very big but sure of himself, as unfazed as Javier Bardem as the lunatic murderer in No Country for Old Men.

The second time that I saw him, Ilir was bickering with the security guards just in front of the gate for the flight to Tirana, Albania. After spitting out clumsy German and shaking his passport, he is finally allowed to pass through security control escorted by two muscle men doubling as security guards. While sitting under flourescent lights in a corner of the terminal, Ilir is sullen, engrossed by his cellphone. And passengers in skirts and high heels.

It's not until I climb into the narrow cabin of the small propeller airplane that I realise that James Bond from the airport — the incarnation of the mafioso from the Balkans that I promised myself to avoid during my stay — will be sitting beside me during the flight. Curled up in his chair, he hasn't taken off his coat. The stare from his light green eyes is cutting and emotionless. As the airplane takes off, his phone rings. He hangs up and begins to whisper. His voice is muffled by the buzz of the engine. A few moment later, we begin to talk. I explain that I am a journalist and that I am coming to visit the region.

Ilir leads an almost tidy life in Switzerland, where he was sent during the Kosovo War. Like many Albanians from Kosovo, he was forced into exil to escape the apartheid policy of the 1990s carried out by the 'Master of Belgrade', Slobodan Milošević. In Zurich, he studied to become an electrician, a career with which he alternates small jobs and a bit of business "under-the-table". After a 'scrap' with a compatriot, Ilir was arrested. Now, he is persona non grata for the Swiss authorities. His residence permit was recently cancelled and he has to return to his country.

Like the majority of his Kosovor-Albanian compatriots, his language, culture, roots and religion (Islam) come from neighbouring Albania. 33-year-old Ilir, whose first name recalls the prosperous kingdom of Illyria, the founding myth of the Balkan peninsula, speaks a lot about his family: "patriots", as he proudly calls them, straightening himself up in his seat. His father collects American cars, antique Rolls Royce and Chevrolets from the '50s, that belonged to the leaders of communist Albania. One of his uncles founded a political party in Tirana whose future is promising. The second is in prison for killing his neighbour with a kalachnikov during a "neighbourhood row".

The third owns a hotel: the establishment is called Hotel Drenica, located on the Adriatic Sea. "A very beautiful place on the beach, modern with air conditioning and everything," Ilir tells me, enthusiastic. "During the war in Kosovo, the hotel was the headquarters of the UÇK (KLA, or the Kosovo Liberation Army). The patriots trained there night and day before leaving for the underground." Ilir explains to me that the UÇK fighters are "heros. If my father hadn't been forced to go abroad, I would have also taken up arms to liberate the country from that dog Milošević." He invites me to come to see him in Durrës to "see the country". A few days later, I turn up at the bus station. A loud and industrial port city perched on the Adriatic, Durrës is known for being the kindgom of smugglers and organised crime, a popular entry point for illegal immigration into the European Union. The Italian coast is an eight hour ferry ride away for those who seek exil. The Hotel Drenica, a large prefabricated building painted in pastel colours, sits on the waterfront.

On façade flies the Albanian flag, a black eagle on a blood red background. In front of the main entrance, the marble memorial commemorating UÇK soldiers leaves no doubt as to the owner's political beliefs. From '98 to '99, the place, located about 100 kilometres from the borders, was at the heart of all the secret activities of the army. It served as the nerve centre of the resistance through which drugs, weapons and laundered money would have passed.

Inside, there are not really any tourists. No reception area. There's a bar where a few regulars at the counter turn and give me a long and hard stare. On the pale pink walls are portraits of bearded men, dressed in uniforms and holding kalachnikovs with rather optimistic expressions.

Ilir's uncle steps forward; he's about 60 years old, straight as an arrow with a clear look and a high-collared shirt. With the look of a shark, he takes my hand and greets me with a an ice-cold 'Mirdita' (Hello). The interview begins: Ilir translates into German, while his uncle stares at me, his nose in his Rakija (popular alcohol in Kosovo — Ed.)

"You have beautiful pictures on the walls. Who are these armed men? - Resistants. Heroes. Were you also a member of the UÇK? - Yes. I was a commander. - What was your role during the war? - Find uniforms, accept weapon deliveries, stock them. Recruit and train troops."

Rumour has it some funny things happened at the Hotel Drenica. Certain anonymous sources participated in rough interrogations, acts of torture and deporting prisoners. Not to mention the possible organ business...I know that former members of the UÇK are not choir boys. Before intervening in Kosovo and supporting them — mostly because of the Americans — they were even considered a terrorist organisation, financed by organised crime through drugs and arms trafficking and prostitution networks. Surrounded by five men built like tanks and a dead silence, the atmosphere is not conducive to confiding information; I continue my interview.

"Where did the money that financed the resistance come from? Weapons? - The Americans. Partisans. - Did you kill people? - I defended my country. - Did you torture Serbians? - That is not important. - Have you heard rumours of organ trafficking?"

Ilir shoots me an appalled look while his uncle stays silent. I insist. The question launches like a rocket.

You just read the first chapter of our investigation into organ trafficking in Kosovo. Discover the next chapter of this great thriller every Tuesday throughout the summer and Autumn here at your only European magazine.