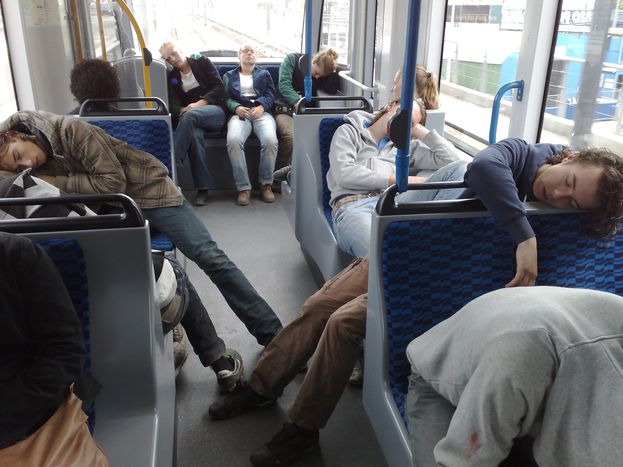 Amsterdam Public Transport - Ever on Time?

And when it comes, why do we have to be tortured by them?

How many times in our lives we have problems with public transport? Probably hundreds, or even thousands, wherever we live. I lived in several cities, such as Sarajevo, Budapest or Belgrade, and in all of these cities I used public transport, but in Amsterdam I have the worst experience ever.

As this is the Amsterdam blog, I will write about Amsterdam's public transport company, GVB. 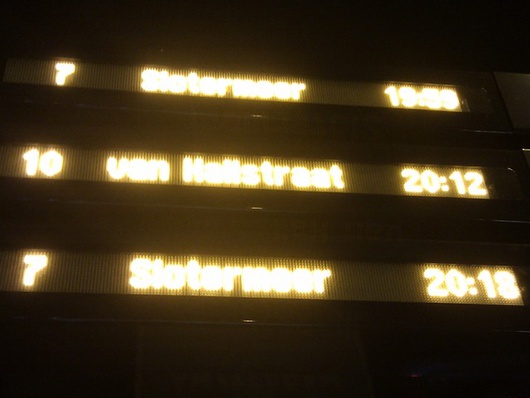 (photo where you can see the space between two trams number 7 - 19 minutes?!)

I live in Bos en Lommer, western part of the city, which used to be one of the notorious settlements in Amsterdam. Now they try to make this part as less ghettoized possible. The local authorities destroy old buildings and build the new one, bigger and nicer, in which they bring mixed population, from whole world. The closest station to my house is called after one of the Amsterdam's mayors, Burgemeester De Vlugtlaan, the same as a street next to mine. At this stop I can use either metro, city or regional bus, or tram. Two tram lines go to the city center, as well as one of the buses, but metro leads me to my work place.

Unfortunately (or fortunately, depending on the angle of view), all of these transport means are very rare. They come every 10 - 15 or even 20 minutes, which is, for the tram, very little. Nice fact for Amsterdam is that most of the people use their bicycles (this is the positive angle), but if it's heavy raining, this is not the best option. Then you are dependent on the public transport, and even they drive only 3-4 times per hour, sometimes, they just miss a ride, which means that you have to depart at least 20 minutes earlier than you really need, in the case that metro / bus / tram doesn't come. Of course, if it's snowing, nothing works properly, and it repeats every year. The ticket to the city center costs at least 1,5€, and if you don't have a magnetic "OV chipkaart" (ticket which you can recharge with the certain amount of money), then it's even more, up to 2,8€ per hour. For that big price, service would have to be better. 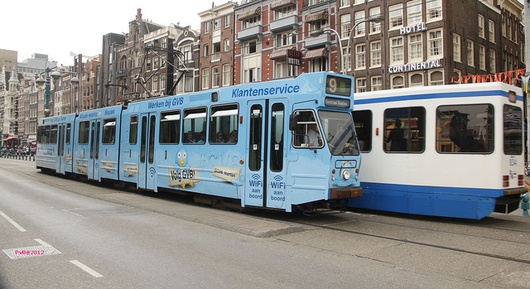 (trams donated to my city, Sarajevo)

One day, I was late for work, and in a big hurry. I had a bike with me (it's possible to go by metro with your bike), and it's needed to buy a bicycle surcharge. Machine where people buy tickets didn't work properly (I needed to keep trying over and over again, and it happened to me enormous amount of times), and I just gave up. Unlucky for me, I was caught by controller and he said he will fine me with 37,70€. Of course, even if machine doesn't work, I had to have more time for trying, or at least to call someone to fix it. But then, unexpectedly, on my complaints that machine doesn't work, controller started to insult me.

First sentence was "if you don't like it, go to your country". Then he said that "I shouldn't come to Holland if I don't respect the rules". I was quite shocked, and the only thing he got from me is the claim that I am paying taxes here in The Netherlands, and that money is also going to his salary (GVB is not a private company, and every year they have big losses in their business). The last thing that I was honored to hear was that I have a big mouth. Okay, let's even say that I had a big mouth, especially when I didn't want to shut up on his nationalistic rhetoric, but the worst thing happened at the end, when he didn't want to let me leave the vehicle. I was told that he has a right to keep me as long as he thinks it's needed to write a fine, and that he doesn't have to leave the vehicle. It took for ages, and although I was caught at the third stop from the beginning, I had to go almost to Gein, which is the final stop. One stop before Gein he finally finished his fine, and then he let me go. So, even if the ticket machine didn't work (I had valid ticket for myself, so if I didn't want to pay, I wouldn't pay for myself, too), even I was extremely kind with the controllers (which you can see from the letter they sent me later on), I had to be tortured by fascist rhetoric and fined unjustifiably. 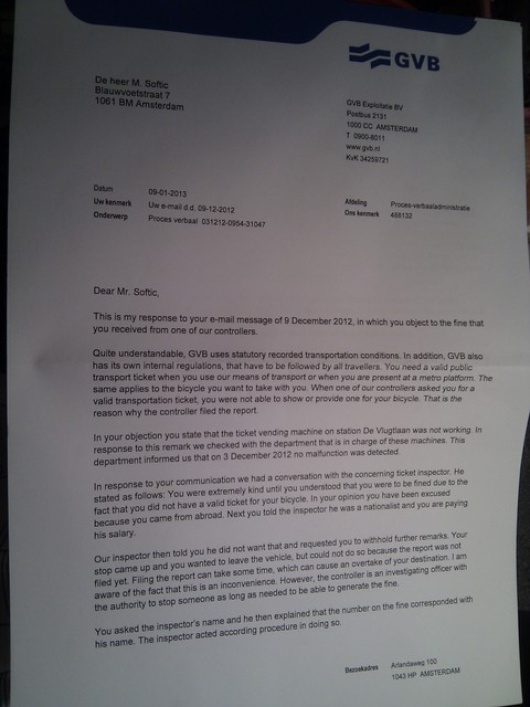 (letter that I am mentioning in the article)

After I paid the fine next day, I sent a complaint to the GVB head office. Of course, I complained about the fine, and his unacceptable behavior. One month later, I received the letter, without contact information (which means they don't want me to continue this communication) where it's written that on the date when I was fined, nobody registered the broken machine, and that controller HAS A RIGHT to keep me as long as he thinks it's needed. Even, on my request to go out at my stop with me, he didn't want to do that, although he could continue writing a fine there. In that case, I wouldn't be late for my work, I wouldn't complain, and the most important, he wouldn't endanger my freedom of movement.

This story encouraged me to conduct the little survey between my friends and acquaintances living in Amsterdam. From 25 of them, 17 told me that in the last three months they had problems with a ticket machine at from one to five times. All of them told me that tickets are unfairly expensive comparing to the other European cities, and 7 of them told me that controllers aren't always kind (8 of them never met them). All of them (so, all 25 persons) told me that at least once a week some of the transport mean (either bus, tram or metro) doesn't come on time, or doesn't come at all. Also, all of them said that very often trams and buses come from two to five minutes earlier, which means that you cannot catch it if you are not early as well. On my question does GVB have enough vehicles in the traffic during the day, 16 participants from my survey answered with no, which I already stated in the first paragraph. More than half of them (13) said that few times in the last three months they waited more than 20 minutes for the bus, tram or metro.

So, the point is, if you ever come to Amsterdam, you can expect bad public transport service, chauvinism from their controllers, endangering your freedom of movement, and unfair fines. If you complain, you'll be told you have a big mouth, and nobody will actually think if you are maybe right or not. Fine has to be paid within eight days, otherwise they will send you the usurers (in Holland it's legal to engage the companies which call in the debt for you) and you'll be charged for their expenses, too. It's not possible to be right, because usually you have no witnesses, unlike them, because always at least 10 controllers check the passengers.