America First, but which European country will be second?

"America First." We all got that message loud and clear. But which of the European countries will be second? The Dutch got in early with their satirical video, and now the rest of Europe’s comedians are getting involved. Which European country will Trump choose as second-best? And how does he feel about his newfound ability to unite Europe?

It has been two weeks now since the Dutch late night show Zondag met Lubach published an introductory video about the Netherlands for Trump. In it, Dutch history and culture are satirized and used to advertise their country in words and phrases that the new President of the USA will understand. For example, they claim that the Dutch "have the best words, all other languages have failed."

The video went viral, racking up more than 20,000,000 views and quickly became popular in the Netherlands, across Europe and beyond, with this special request – "We totally understand it’s going to be America first but can we just say the Netherlands second?"

Trump’s America as the world’s number one? That makes us all very anxious. The Netherlands as the top country in Europe? That we really can’t abide. The other European countries could not sit back and accept this at all and so it wasn’t long before they too started to appeal to Trump to put their country second.

Switzerland: Lots of Russians, no Mexicans

Next came a video from the Swiss TV show Deville Late Night, which tried to trump the Dutch video by amping up the sex appeal and saying "we’re not flat, like for example The Netherlands, they’re so flat, total disaster." Switzerland is better, they say, because "it's big!" The country is much more in line with Trumps' goals they said,  as "we have no Mexicans here" but "we love Russia, that’s why we built St. Moritz, it’s a city just for Russians.” They also boast about treating "our women badly. We love it. We did not give them the right to vote until 1971. In some places even until 1990, we grabbed them by the civil rights and they let us do it," they advertise.

Lithuania: fighting against Germans before it was cool

Then came the video for Lithuania, from the internet channel Laisves TV. "We are the center of Europe and the best country in Europe. Period," they say. The narrator then goes on to recall that 600 years ago Lithuania was the biggest country in Europe and destroyed the Germans "before it was trendy to destroy the nasty Germans." Later they destroyed "that nasty Soviet Union" and they destroyed it by building a wall, they say.

Germany: Oktoberfest and taking the piss

The Germans also jumped on board with a video produced by the late night show Neo Magazin Royale, hosted by famous comedian Jan Böhmermann. This video says that Germany is so great that it already had a great wall, which, crucially, the Russians paid for. "We actually cried when, after 28 years the wall was brought down by David Hasselhoff," they add. What does it matter if it was actually for joy? They also joke about the annual Oktoberfest in Munich: "It is the best beer fest that God ever created. There is pee everywhere."

The story also ends with a helpful outline of "Germany", just in case Trump wants to push the red button. This is an inside joke, for the Germans, because Böhmermann landed himself on the wrong side of Turkey’s President Erdogan, after publishing a satirical poem about him. In fact, this is not the first time that Neo Magazine Royale has responded to Trump. During the election campaign, they responded to Trump’s campaign with a video called "Be German" complete with a special # MakeGermanyGreatAgain hashtag.

Portugal, Belgium and Luxembourg have also made advertisements for their countries in a bid to secure second place after America. The video for Luxembourg praises their country as a taxpayer and draw parallels to the new First Lady. They too have an immigrant woman who escaped her terrible homeland and was lovingly embraced by the country into which she fled, they say.

Morocco has also published a video too, which states that Trump would be making a big mistake if he chose a European country that has been weakened by the refugee crisis.

"It wasn’t just us Germans that were outraged, other nations were also beside themselves when they saw the video of the Dutch," Böhmermann says, after showing Germany’s video on his show. That is why "all the good late night shows of the world" have committed to working against the Netherlands. The video the Dutch made was "so funny that you can not beat it" he said. So, the only way to get them back is if "we all come together, and give each country the opportunity to gain second place."

And so, Trump has reunited Europe. We are working towards a common goal: to be granted a respectable second place! So far, all the videos have used simple language with a Trump-like drawl. A few words and concise phrases, come uo repeadtedly like "it's great" or "you'll love it."

So really, the countries are not arguing about being better than the others. There is also a new common hashtag: #EverySecondCounts. And a new Twitter account which tweets about new European achievements in the individual countries – called @itsgreateu. The different countries are differentiated using their flag.

An internal battle has also opened up on the Twitter account with the Lithuanian’s claiming that their video was the most popular on the 4 February. 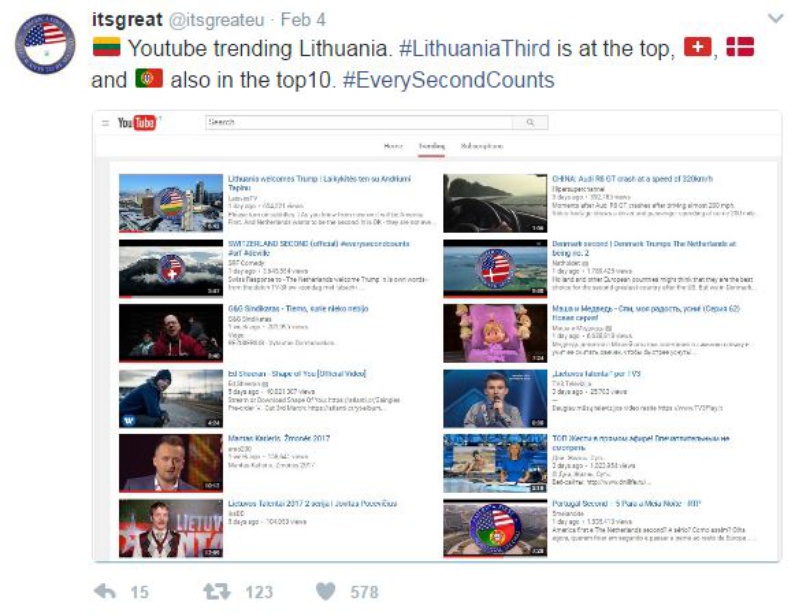 On the website everysecondcounts, a circle of flags can be seen on a dark blue background. Lots of equals assembled together. "Who wants to be the second?" it says in the middle. A click on a respective flag opens the video for that country in which they apply for second place. It’s a bit like the Eurovision Song Contest really, just much funnier.