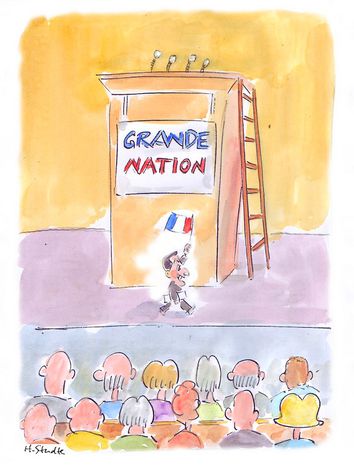 French and Italian heads of state Nicolas Sarkozy and Silvio Berlusconi are shorter than average but, depending on the country, this is not necessarily a fault! High heels ahoy: it's the weekly tour of European expressions

A lot of people think that to rule you must be tall. Of course, there are examples to the contrary like Sarkozy or Berlusconi who, even when wearing lifts, need to stand on tiptoe when posing for photographs. But, a small stature is often the subject of mockery. In France, people speak of petit teigneux : people who are small but cantankerous. Worse still is court sur pattes

('short-legged'). In Italian, you can even be called un tappo de bottiglia , or a 'bottle cap'. The Italians’ Spanish cousins share this reference: being used to the sun, they compare short people to tapón de alberca

('pool plugs'). The Germans, however, are more used to rain and call short people Knirps

, the brand name for pocket umbrellas.

But, fortunately, height isn’t everything! Shorter people often try to compensate for this disadvantage. In Lithuania, it is said that it isn't the height, it's the impact that counts: svarbu ne ūgis, o smūgis. So a lesser height might not be such a bad thing in the end! You can be Klein aber fein (small but fine) as the Germans say Kleine Brötchen backen

(small but feisty) as the French say. Short people can also be good lovers according to English people who think that all good things come in small packages.

. The Polish also know how to defend themselves against being made fun of. In response to an onslaught of mockery, they reply gdy rozdawali wzrost, stałem/stałam po inteligencję. Translation, please? When it came time for them to choose their height from the box, they chose intelligence instead. Touché!