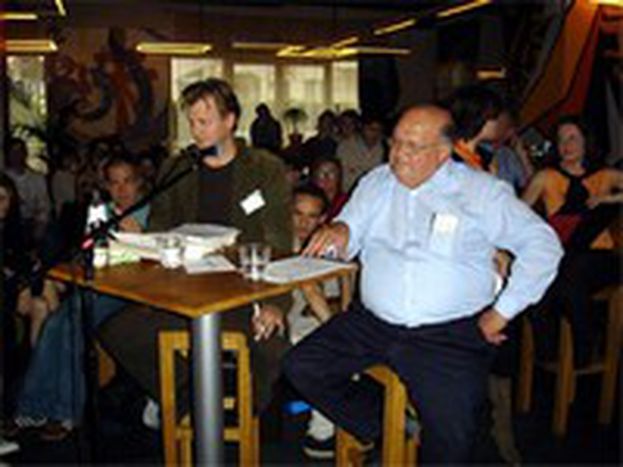 “All constitutions are written by elites”

With the French referendum on the EU constitution just around the corner, emotions are running high about the nature of the text and its democratic value. In Brussels on 14 May, café babel organised a heated debate addressing this question.

With contributions from Jean-Luc Dehaene, the former Belgian Prime Minister and Vice Chairman of the Convention responsible for drawing up the European constitution, MEP Carl Schlyter (European Greens) and Elodie Fazi of the Civil Society Contact Group, the debate provoked passionate reactions from the public showing that the democratic question remains at the heart of the debate on European integration.

No to national referenda

Mr Dehaene, who defined himself as “for the constitution but against the referendum”, expressed his doubts as to whether the ratification process would help to democratise Europe. Alluding to the “strongly technical” nature of Part III of the Constitutional Treaty, which deals with the policies and functioning of the European Union, Mr Dehaene intimated the difficulties presented by a public debate of the text. Arguing that domestic and European issues often become confused in national debates, Mr Dehaene confessed himself to be unconvinced by the benefits of the ratification process in France. The former Prime Minister of Belgium felt that the debate was becoming inextricably linked to French social problems with the result of producing “answers to questions other than those which have been asked”. In response to criticisms about the undemocratic nature of producing a text without the mandate of the national population, Mr Dehaene retorted that “all constitutions are written by elites” and added that this one was no exception. In order for Europe to adapt to a globalised world, Mr Dehaene insisted on the necessity for Europeans to speak with “one voice” and saw the proposed constitution as a means of achieving this goal.

In opposition to his colleague, Mr Schlyter argued that “participatory democracy is the basis for a working democracy”, insisting that an inclusive referendum was the only way to reach out to Europe’s citizens and open doors to the European political process. The Green MEP for Sweden stressed the importance of public participation in the process of adopting a document which will significantly change the balance of parliamentary power at both the national and European level. Mr Schlyter also expressed his concerns over Part III of the constitution which he believes to contain elements which should be voted on at every election rather than being enshrined in a constitutional treaty. Whilst in favour of the enhanced transparency envisaged in the text, Mr Schlyter stated that “the price is too high”, indicating in particular his worries over the proposals for improved military capacities in the EU member states.

As a representative of civil society groups, Miss Fazi was able to enlarge the debate and offer an insight into the role of politicised citizens in the ratification process. Insisting that the role of NGOs was not exclusively to promote the Yes position, Miss Fazi explained that many organisations have decided to stay “neutral”, construing their role as mediators between European institutions and civil society with the aim of “improving the quality of the debate”. Benefiting from a position which is less constrained than that of political organisations, Miss Fazi identified the work of these organisations as a means of achieving a “European perspective” on the issues raised in the constitution. Miss Fazi also considered the famous Article I-47 to be a “huge advance for transparency” and a real opportunity for the creation of a “European public space”. This Article has been the subject of much press attention since it envisages a “right of initiative” for EU citizens which would, in theory at least, allow a group of 1 million citizens coming from a significant number of member states to petition the European Commission to introduce initiatives.

Yet both Miss Fazi and Mr Schlyter showed some misgivings about this proposal, calling attention to its vague formulation which contains no obligation for the Commission to act on the public initiative. Miss Fazi raised further concerns about the prospect of strong economic interests taking advantage of this initiative to increase their influence on the European institutions. Miss Favi remarked that an “engaged citizenship” was the sine qua non of a working democracy, lamenting the largely uninformed nature of the debate which still prevails in many European countries. “To reach out to these citizens we need responsible media coverage” Miss Favi stated, expressing her hopes for improved relations between the EU and national media for the future.