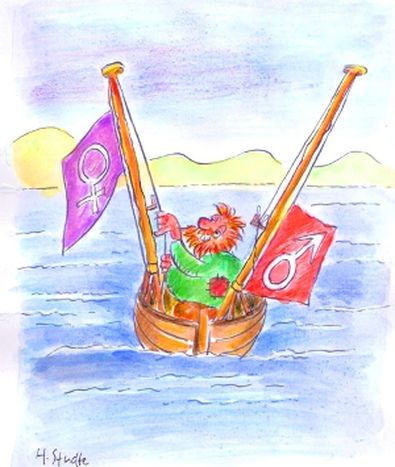 Europe, when viewed from a linguistic perspective, has gender issues. Let’s all board the ‘Confusion’, a boat from Dublin taking a linguistic cruise of Europe. If we use Ireland’s native tongue Gaeilge to describe our craft, we’re sailing on the masculine bád. But when stopping off in London, convention would have it that our means of transport is now female. “She’s bound for Hamburg”, you might hear the harbour-master say. When refuelling in Germany, our Boot’s confusion would temporarily end, now being gender neutral. Not wanting to miss out on a female baguette and some masculine vin, we’d drop anchor in France and once again be travelling on a male bateau. When we finally disembark in Italy, our ship would have undergone yet another gender change to become a female barca. Let’s all be grateful that the ‘Confusion’ is going no further!