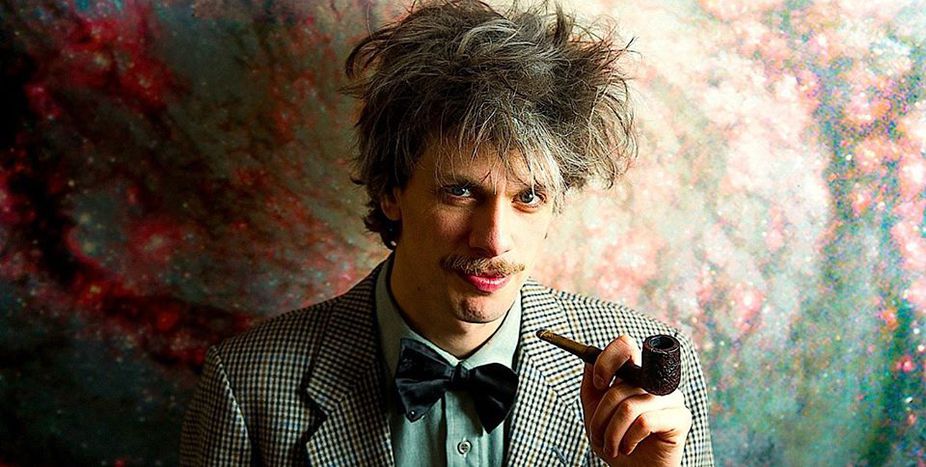 As you enter the theatre you are greeted personally by Albert, who shakes your hand, eyes gleaming with enthusiasm, energy and bonhomie. Once everyone is seated, he makes his address to an audience of Princeton University students in New Jersey, where he has been accepted on the staff in 1933, after fleeing the horrors of Nazi Germany. So begins 'Albert Einstein - Relativitively Speaking'

Einstein is interrupted by a voice over which introduces him. The show continues, with unexpected twists and turns, breaking into music and song, tripping over puns and witticisms, flights of fancy and hard core science of special theory of relativity, including e=mc squared, who appears as a jazzy up-beat character, a rap artist. Extraordinary as it may sound, it might even have clarified Einstein's theories for me, as I read in my notes that 'time dilates as things move towards the speed of light, while things shrink. The speed of light is constant, while space/time is relative' and 'the curvature of space/time (not gravity) forces two objects together.'

Whether or not I have grasped the elements of Einstein's physics, the Tangram theatre company's show captivates right from the beginning, with its blend of humour, music, vitality, wit. It surprises as it leaps from giddy heights of laughter to profound emotion. Its ability is to cut through the jokes and gags and pinpoint something deeply rooted in the human condition. It is where we have to confront the moral dilemma of there being no absolute black and white ethical decisions. A man devoted to the beauty of abstract thought and theoretical mathematics and physics has to watch as his calculations are used to create that most destructive of weapons, the atomic bomb. Take your hankies dear readers, you will need them, in this truly cathartic, splendid performance by John Hinton and Jo Eagle.