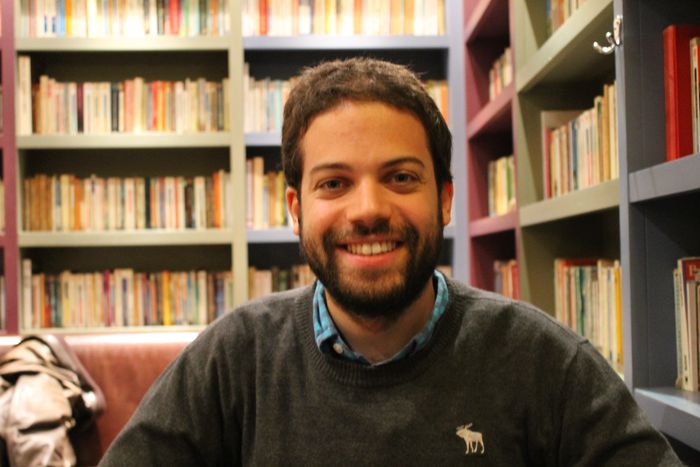 We interview Argentine filmmaker Alan Stivelman, who is currently in the middle of a European tour where he is presenting his documentary, Humano. Alan travelled to the Andes to discover the origins of mankind, but as soon as he arrived, he was warned that he would never understand, because Alan wasn’t a human. There he learned how to become one. We talk about religions, cultures and connections.

I met Alan Stivelman a few weeks ago at Café des Livres in Paris. I found out almost by accident that Alan, a 28 year-old filmmaker from Argentina, was going to be in the French capital when I saw an advert for his documentary, Humano, on my Facebook timeline. I suppose that’s how journalism works nowadays. That’s how I discovered that Alan had lived for a few months with the indigenous Andean Q’ero community, a population that has only been in contact with Western civilisation since the 1960s but that now even boasts its own website, and that he had made a documentary about his experience. Alan, a citadino, or “city boy” (as he puts it himself) from Buenos Aires, had felt the need to find himself from a very young age, which is why at the age of 23 he decided to save some money with the sole objective of going to the mountains to try and work out the origins of mankind, why we are here and what for: by no means an easy feat. 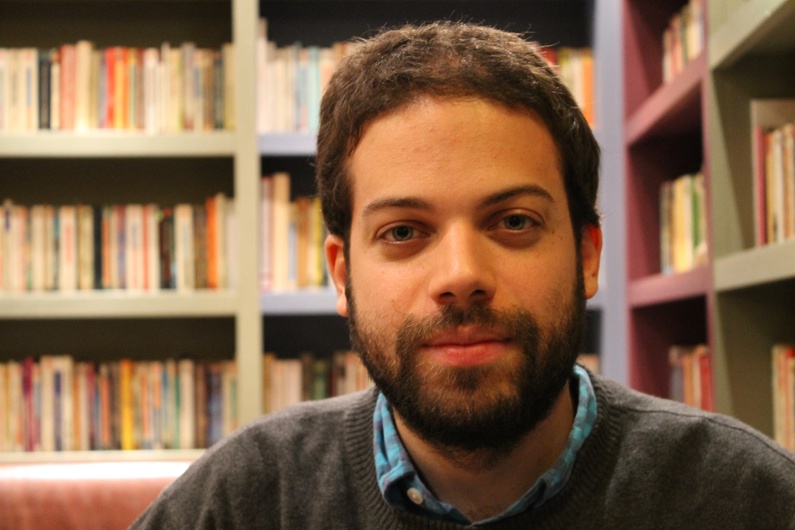 “I saved up a bit of money, I bought myself a camera and some good sound recording equipment, and what I had left was enough to get me to Bolivia and Peru by train and boat… It took me three days to get there and then I met Plácido, a priest from the Q’ero community,” Alan tells me, as he warms his hands on his cup of tea. Alan has greyish blue eyes and a sincere gaze. I don’t know whether it’s his smile or that very attractive Spanish accent that he has which is typical of the people of Buenos Aires, but my conversation with him flowed naturally from the very first moment. I only saw him for the first time the night before during the screening of his documentary in a Parisian hall which has been converted into an art gallery, but as I’m talking to him I get the feeling that I’ve known him for a long time. He really is an urban adventurer: He doesn’t wear cargo pants or a gilet full of photo films, ropes and Swiss Army knives – far from it – he’s dressed in a blue checkered shirt, a finely woven grey jersey and jeans. Later on I discover that this is what the authenticity of his story is founded upon. Alan doesn’t set out to show anything or prove anything to anyone; Alan sets out to be himself, which is something that may seem easy at first glance but isn’t quite so.

A camera and a rucksack filled with 200 questions

“I arrived there with 200 questions and travelled with Plácido all across the Andes for three months, from Lake Titicaca to Machu Picchu, although Plácido warned me from the beginning that his answers would be of no use to me for the simple reason that I wasn’t human,” he explains to me in a completely natural way as I listen to him completely perplexed. What does it mean that Alan “isn’t human?” That’s where the name of the documentary comes from which he filmed during that time, when his workplace was split between the high peaks of the Andes and a Starbucks in Cusco which functioned as his office, where he would clear the images off his camera and recharge his batteries. In Humano, the director has included the most important parts of the process which led to him finding himself and what it really means to be human, “becoming reconciled with his religion” and even re-evaluating the validity of such well-established theories such as Darwin’s. 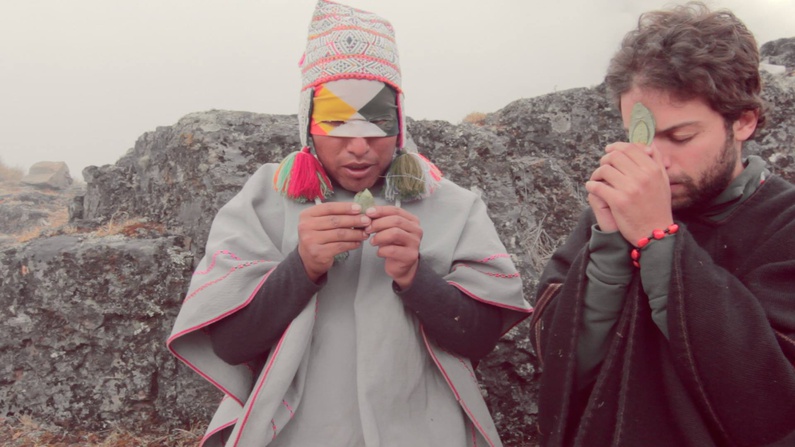 “I come from a Jewish family but I rejected my religion as a boy, because my idea of God didn’t match up with the idea of the cruel God in the Old Testament. I couldn’t identify myself with that, so I decided not to have my Bar Mitzvah, which caused a crisis which lasted several years for me, until I spoke to Plácido about it all.” Plácido explained to him that religions are there “to facilitate understanding amongst human beings,” something which wars even play a part in. Amongst other things, his stay with the Q’ero community helped the young filmmaker to rid himself of the burden that he had at the age of 24, when he lived his life “obsessed with what we were capable of doing in the world.” “I noticed that they [the Q’ero community] were completely peaceful even in the face of the most terrible answer: that perhaps mankind will end and we’ll disappear. They smile and tell you that mankind may well fail, which seemed terrible to me a few years ago, but now I’ve come to accept it peacefully,” explains the director thoughtfully. I ask him whether the key is to be more at one with nature, whether his acceptance has something to do with understanding one’s existence as part of a cycle which encompasses each and every being who walks the planet. “It has something to do with a connection with oneself,” he replies. “Nature can be a means of facilitating this connection with oneself, but no less so a means of connecting with our spirit. If I search for tunnels or the origin of the world, I’m doing it for myself, because this search helps me connect with myself. When I was 20, I was doing it to reveal something to mankind; everything that I did back then had a messianic quality to it, but not anymore.”

A question of values? 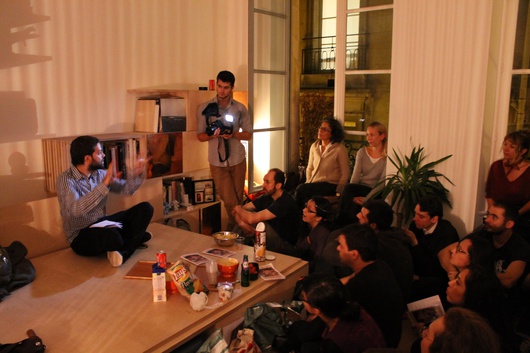 Everything that he’s telling me sounds well and good, but I still don’t see how I’m supposed to put it into practice. I wonder whether one could define being human with a series of values, but I realise immediately that I’m running the risk of westernising a state of being which ought to be understood from a different angle. Does being human mean being humane? And if that is the case, what does it mean to be 'humane'? “I feel like there are intrinsic values to being human,” Alan replies emphatically. “It seems as though there are ideas in our DNA which are accepted or rejected, such as you will be devoted or you will not kill. I don’t know where these ideas come from, but they’re truths which unite us all. Some people like to call them “values”, but I don’t know whether I’d use that word myself, because religions have exploited it a lot, and we already know about the double standards of religions…”. Everything seems to point to the fact that the human condition is something personal which everybody understands in their own way. For him, a human is “a being which is looking for itself, which doesn’t know who it is but is conscious of this fact.” If you want to find yourself, you absolutely need to be open to everything and, above all, not judge: “If I had to make one recommendation, without wanting to dogmatise anyone, I would say that you have to be open and receptive. It can be hard not to judge; the Andes gave me the tools to beat that temptation and to be more open. That being said, people obviously tend to judge others and it takes a lot of work every day not to do so."

“It happened to me like it does to Neo, the main character in the Matrix. He’s asked whether he wants to take a tablet to return him to his original lethargic state, or whether he wants to wake up. That’s what my journey was like. I didn’t want to return to my original state, I didn’t want to return to Argentina as the same person; I wanted a real transformation," he tells me. I ask him whether it’s possible that he wants to live that way. “No, I’m not saying that that’s the life for me; I’m a city boy and I’m immersed in this world, but I realise that I needed to see another way, another style, and that now I can bring the mountains to the city and try to keep up the Andean spirit there wherever I go and in whatever I do, to not cling on to any form of religion or spirituality, to stay open to learning things, discussing things with people and continue searching for the truth.”