A Turkish tale of cafebabel.com and borders: an insider/outsider story (part one)

I am not a journalist. I sometimes practice journalism, extensively study journalism, and mostly hang out with journalists, but I wouldn’t identify myself one. However, when the cafebabel.com team asked me to join their project briefly this summer, I knew I was embarking on a great adventure, says Burcu Baykurt

It is rather strange to praise a publication to its readers but cafebabel.

com is truly one of those gems in European journalism that give you hope and excitement about future because you know networked journalism is not solely a fancy academic jargon, but an exciting experience that you can easily be part of.

Open-minded, curious, and adventurous young people come together and travel to a country that maybe they've never been to before. Thanks to the wide youth network and the internet, they know how to have access the local insights on the topics they cover. Since they bring their foreign and comparing perspective on a topic, they can easily make familiar things strange, strange things familiar in almost anything. They don't have to know the language of the country they're visiting. Their local host can guide them through all time. They also know serendipity is an indispensable part of their job, so mixing and mingling with the local strangers is a delightful job requirement. 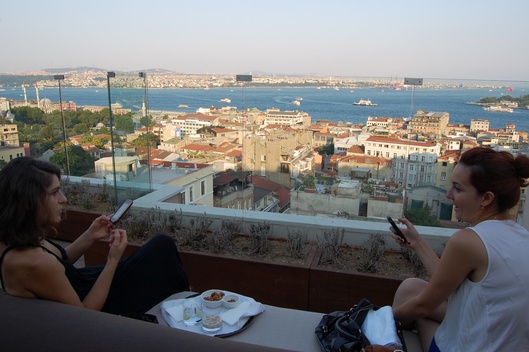 Most importantly, it is fun. It is maybe a work trip, but along with all the pleasures of traveling. At least, that was our experience when five British, Belgian, German, French, and Italian journalists visited Istanbul in July 2012. They covered topics from comic culture to women in sports. Being one of their local hosts, I found out so many interesting things about my country through their questions and curiosity. Sometimes it took only five minutes to reach the right people because we knew who they should talk to. Sometimes they met a random Turk on the street and let him or her lead them to a new source or piece of information.

On their last day, the journalists ran into a big political protest and couldn't resist the journalistic itch of covering it, thereby ending up corresponding on a highly underreported political story by a total coincidence. Accompanying them in some of their interviews, I got to meet really wonderful people. After talking with many Turks from highly diverse backgrounds, they ended up discussing their stories and ideas at the hostel every night and collaboratively initiating new ideas. And we had fun, so much fun. Obviously fun included typical yummy raki-meze nights, drinking Efes, and dancing to some Turkish tunes.

Read part II of 'A Turkish tale of cafebabel.com and borders: an insider/outsider story' here