A Tale of Two Frances

Last weekend, the French people spoke: Emmanuel Macron and Marine Le Pen will advance to the second round of the French presidential elections. Their victories are the result of a country that is deeply divided on Europe and the question of globalisation.

The pollsters got it right for once. After being accused of dropping the ball, first with Brexit and then with Donald Trump, they were right on the money when it came to the first round of the French presidential elections. With 23.9% and 21.4% of the vote respectively, Emmanuel Macron and Marine Le Pen won the first round will go face-to-face in the second round on 7 May.

The same opinion polls also successfully predicted that the two runners up would be François Fillon (19.94%) and Jean-Luc Mélenchon (19.62%). And while the electoral map may be dominated by two colours, France is divided by four. The day after the election, the madness of the campaign gives way to a sobering lession: the French people have aligned themselves behind four different projects with extremely different possibilities for France's future. 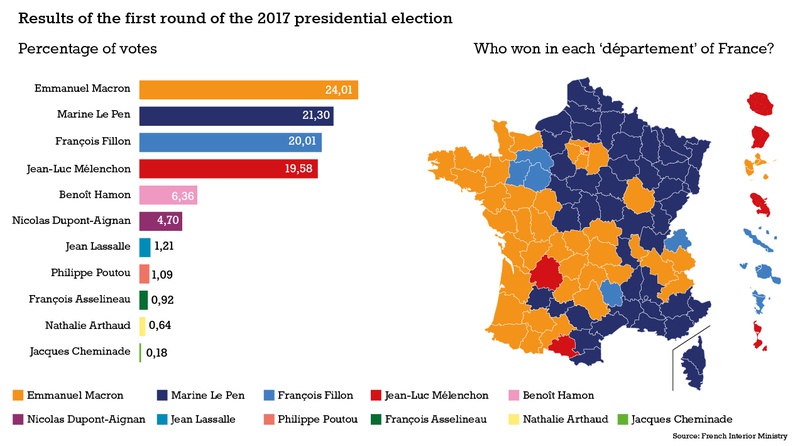 Emmanuel Macron (just) won the largest proportion of the vote; something which was unthinkable when his movement En Marche! was founded just a year ago. The 39-year-old candidate built up his victory little by little by seducing well-off, educated, and pro-Europeans voters. By contrast, Marine Le Pen's rise to prominence was swift. Her supporters were overwhelmingly 'disadvantaged', with little formal education and a lot of worries about the future.

The map of votes in the first round shows an almost perfect divide between eastern and western France; one which also corresponds with the spread of unqualified and unemployed workers in the country. Regions in the west, with a higher percentage of degree holders and less unemployment, voted Macron. The east, where rates of unemployment are highest, voted le Pen. Let's not forget, these same factors turned out to be important in both the Brexit referendum and Donald Trump's presidential victory. 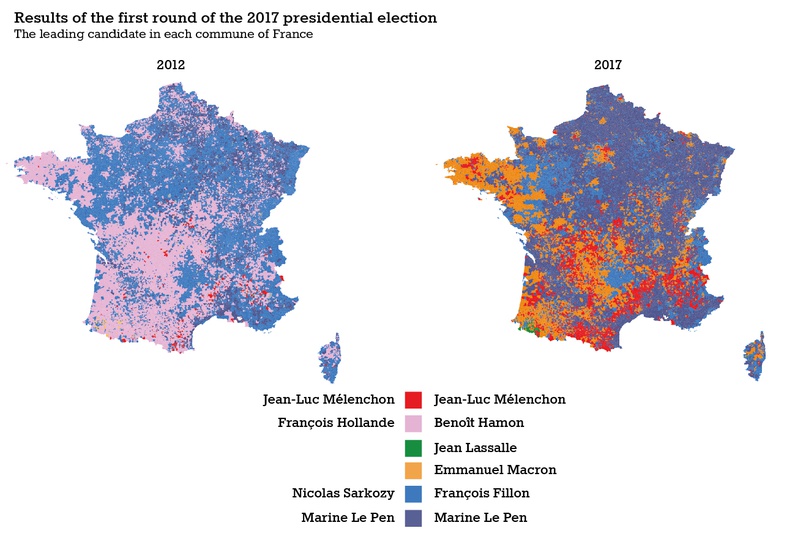 This isn't a complete explanation of the vote, far from it. But the showdown between Macron and Le Pen is a showdown between two completely conflicting ideologies. In two weeks' time, the 'winners' and 'losers' of the era of globalisation will go head-to-head. And Europe could be the referee. How's that for a comeback?