A Silent Farewell to the Polish Market

At the beginning of the ‘90s, finding cheap prices on goods—from cigarettes, garden gnomes, knockoff perfume, among other things—was as easy as going on a trip to the “Polish Markets” in Słubice. Is business at the bazaars still booming, 25 years after the fall of the Berlin Wall?

“Here comes the Poland bus!”, calls one of the retirees at the Frankfurt (Oder) railway station. Shortly after, a group of elderly people squeeze their way into the vehicle. Its doors close after the last of the rolling walkers, wheelchairs and suitcases with cat embroidery are stowed away. The passengers’ mission is written on the bus’s side windows in a bold font: “Travelling to Słubice for cheap prices” and “Off to Poland for extra goodies.” Many of the retirees have travelled the extra 100 kilometres from Berlin, taking advantage of special offers provided by the Deutsche Bahn railway company. Their shopping lists read, “visit my hairdresser”, “blue pills for my buddies”, “coffee” and, of course, “cigarettes”. 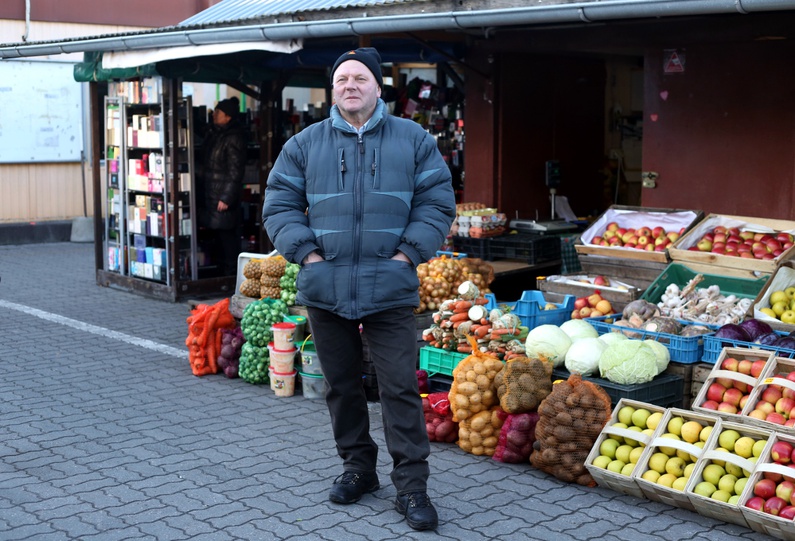 The bus navigates the tower block district before steering in the direction of the Oder bridge. Although the border checkpoint buildings have in recent years been torn down, and there have ceased to be inspections, one can sense a border. A large number of gaudy billboards spring up out of the ground immediately after crossing the bridge: “Cigarettes 24 Hours”, “Super Cheap!” and again, “Cigarettes!!!!!” The small town of Słubice, with its 17,000 inhabitants, seems to be blanketed with smoke shops. There are two bazaars here, both of which Germans like to call “Polish Markets”. The larger of the two is a few kilometres outside of the city centre. Weekend tourists are able to get everything here, from wailing puppies to knockoff Thor Steinar clothes—a brand hugely popular with neo-Nazis.

The smaller bazaar, which is just a few hundred metres away from the Oder bridge, is considered an insiders’ secret. It consists of an easily navigable number of roofed corridors. Small shops are lined up next to each other, packed to the brim with a vibrant mishmash of goods: kitschy frilled curtains next to sparkly tiger print blouses, pirated Andrea Berg CDs next to fishing tackle, garden gnomes and plastic dolls, fruits, vegetables and chocolate pralines. Following your nose, you wind up at the very heart of the bazaar: the Bar Appetit. Bratwursts and chicken legs dripping with grease are piled up behind the counter. The small room is already packed in the morning with small groups of elderly people, who sit at plastic tables and go to town on their breaded schnitzels with plastic silverware. Ketchup, mayonnaise and mustard are on standby in XXL squeeze bottles.

Marysia, with her red apron, short red dyed haircut, and friendly but stern demeanour, serves drinks. “In Poland we actually eat later in the day, around 4 p.m.”, she explains in a fluid German with strong Polish accent, “but here lunchtime is from 11 to 2, just like in Germany”. The 56-year-old opened the small bazaar tuck shop more than 20 years ago. Today, she only occasionally cooks and serves, her youngest daughter having taken over management a couple years ago. Before the Fall of the Iron Curtain, Marysia was a seamstress at a local factory that was forced to close—like many state companies in Poland—after 1989. Like her, many Poles used the newly won economic freedoms that the collapse of socialism offered them to open their own small businesses. 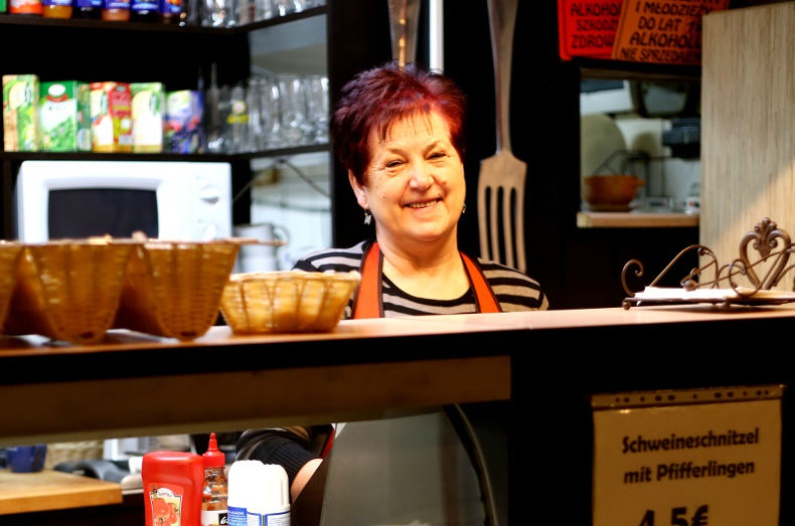 Further down the corridor is Zofia’s flower shop. “Cigarettes would have brought in more money, but I thought flowers better suited a woman”, says the mid 60-year- old as she bundles pink anthurium flowers into a bouquet with green grasses. The bouquet is intended for one of her regular customers: Dieter. He runs errands while his wife is getting a haircut next door. Chatting with Zofia—in German, naturally—is part of the bazaar experience. Like so many other Frankfurters, Dieter’s Polish skills are limited—even after all these years—to words like “please” and “thank you”. “If he had gotten a Polish woman in bed, then I’m sure his Polish would be better”, Zofia jokingly says after he leaves her shop.

Of all her customers, 90% are German. “They really like things to be comfortable”, says the experienced saleswoman. In Poland, it’s not at all common to put flowers on the table. “It’s not really worth it, because they only last a few days”, she says. She’s noticed over the past couple of years that the customers have increasingly been older people. “Young people shop in all those evil monstrosities”, she says, meaning discount stores, supermarkets and shopping centres. “Besides, there are constantly fewer people living in Frankfurt. Just look at all those blocks of flats. Many of them are either empty or are being torn down”.

Is everything cheaper in Poland?

The number of residents in Frankfurt, just like many other East Germany cities, is in fact sinking. While there were 86,000 residents directly after the Fall, that number has reduced by roughly a third. Even a demographic shift has been noticeable; young people under 29 years old make up less than 26% of the city population, while the number of those over 45 steadily increased to 60% in 2012. Frankfurt has been unsuccessful in the fight to reverse this trend. Regardless of the fact that it has a university, many students would rather commute an hour to Berlin, a city that in terms of jobs and recreation is hard to outmatch.

The amount of customers at the bazaar has also been decreasing, because the prices on both sides of the Oder have been catching up with each other over the past couple of years. Nevertheless, the preconception in Germany that everything is cheaper in Poland is still widely spread. This is a reflection of the reality that existed in the early ‘90s. Back then, the price difference was so huge that Germans went in droves to the bazaars to find wholesale bargains on goods. Now products in Polish stores cost almost as much as they do in German stores. And because the Polish Market is geared toward the German wallet, many things in supermarkets and discount stores are even a little more expensive. 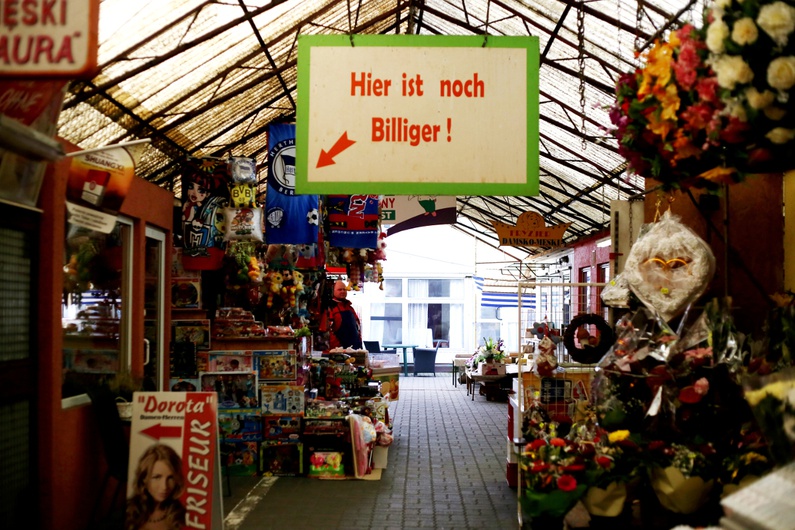 “We never go to the bazaar”, says Joanna Pyrgiel. The energetic 38-year-old, who is responsible for foreign collaboration at the municipal office, has lived in Słubice for several years, and has been to the bazaar only once. In contrast to Frankfurt, Słubice is seeing a steady increase in population. The possibility of living in Poland and being able to work just across the border in Germany is attracting Poles to the Oder from the country’s every nook and cranny. “Over there”, salaries are higher, and there seems to be a lack of skilled employees. After the border controls were done away with in 2009, the relationship between Frankfurt and Słubice intensified.

What was considered unimaginable a couple years ago is the norm today, like the bus connection over the Oder, or the German-Polish schools and day-care centres that have sprung up. And there are even collaborative cultural events and festivals. Young people from both parts of the “double city”, as Pyrgiel so describes Frankfurt and Słubice, meet up in numerous clubs and bars throughout Słubice. For the residents of Słubice, the bazaar exists more so in the periphery of their awareness.

The merchants of the small bazaar aren’t creating illusions for themselves about the future of the “Polish Markets”. Should their country join the Eurozone in the not-too-distant future, they could lose their price advantages. “The Euro will come, old nans will die out, then the merchants, too, and soon after there won't be a bazaar at all”, says Zofia in a sober tone. It’s now 3 p.m.—time for Zofia to take her bouquets out of their vases and store them in her shop. The vegetable merchant to the right and the praline merchant to the left are also busy packing up their goods, while Marysia wipes down her tables. The corridors are empty around this time. The last remaining customers leave the bazaar through the eastern entrance, where a discount store, whose parking lot is packed at this time of day, awaits them. Here, the shopping has just begun.