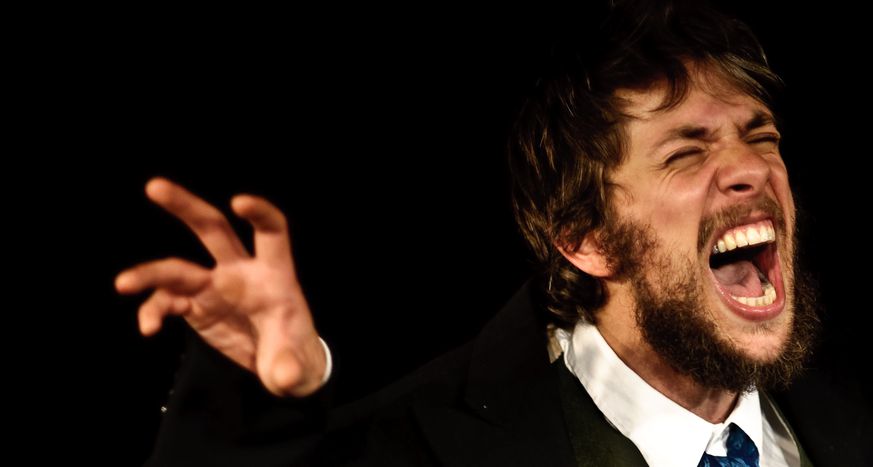 A musical interpretation of Darwin's The Origin of Species

Find out how important a list-making father, a pot-making uncle and a love of barnacles were to Charles Darwin's theory of evolution. A review of the Tangram Theatre's one-man show.

Charles Darwin, played by the exceptional John Hinton, sits at his desk, writing with his quill pen, absorbed in his studies. He seems a little surprised to discover he has visitors, especially so many (there's a full house for the show, every seat taken). At first reluctant to interrupt his work, he soon begins to enjoy sharing his scientific passions. Especially for barnacles which, he tells us, he studied for eight years. He then offers to give his visitors a guided tour of his study, including barnacle specimens, certain tomes in his bookcase and a globe of the world. As he points to each, he gets enthusiastically caught up with reminiscences.

His early studies he tells us, were in medicine, divinity and botany but they had bored him because he didn't learn about barnacles, his passion. These studies also apparently included learning how to play the guitar, for, every so often, he bursts into song.

Then there's his family – father, mother, uncle, cousin (he assumes the voices and gestures of each role). His father has a long list of objections to him taking part in the voyage on the Beagle. His uncle, Josiah Wedgewood, is a pot-maker (and so very laid-back!) and convinces his father it's a good thing.

Once on board the Beagle, Darwin's conversation with the ship's captain Vice-Admiral Robert FitzRoy, takes a hilarious turn as John Hinton, once again playing both parts, Darwin and the captain, becomes embroiled in an argument over whether dolphins are fishes or mammals. The captain also gives him a copy of Charles Lyell's Principles of Geology, which becomes Darwin's inspiration and guide.

As Darwin develops his ideas about evolution, he asks the audience to stand up and – evolve! Apparently we don't do too well at this as he complains that we all seem to regress into amoebae.

Lyell's book helps Charles to formulate his theory of evolution, but this brings another clash with Captain Fitzroy who waves a Bible and calls his ideas blasphemous. However, when Charles returns from his travels, after 5 years, he is fêted as a hero, marries his cousin Emma, and develops his theory of the origin of species, coming to the startling conclusion that our closest relative is the chimpanzee.

This is the first play in Tangram Theatre's scientrilogy (I've seen them in reverse order – what does that say about my evolution?) and the delightful Charles Darwin delivers what I've come to expect from Marie Curie:The Element in the Room and Albert Einstein. The songs are full of puns and jokes, with long words stretched into rhymes, both clever and absurd. John Hinton whirls and spins through a succession of ideas and insights punctuated with irreverent wisecracks and laughter, all delivered with bounding energy.

This dramatic ramble and scamper through Charles Darwin's life, ideas and idiosyncrasies is surely one of the pinnacles of achievement that 'evolution' can produce!

Check out The Origin of Species: A Musical Comedy about Charles Darwin, at the Tangram Theatre, Pleasance Courtyard on 15, 19, 22, 26 and 29th August. Performances of Albert Einstein and The Element in the Room are also on during the Edinburgh Festival Fringe.