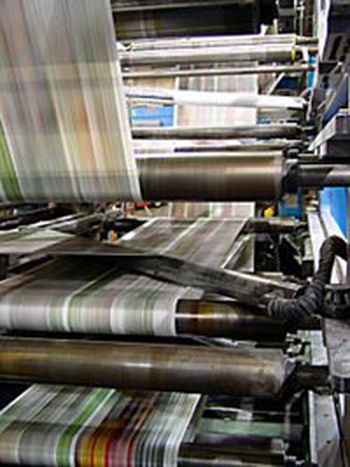 A cartoon image of enlightenment

The crisis surrounding the Mohammad cartoons is not only a European media sensation, but it also shows us that the media do not react appropriately. Instead of enlightening us, they are just adding fuel to the fire.

The culture struggle has been developing for a long time, but now it seems to have arrived. In many Muslim countries, they are protesting against the Mohammad cartoons which were first published in ‘Jyllands Posten’, the Danish newspaper, on 30 September 2005. People have died during demonstrations in Afghanistan, hundreds of Palestinians have attacked the Temporary International Presence in Hebron, and in Damascus and Beirut there have been similar scenes. The catastrophe appears unavoidable.

This is the impression which prevails, when during the last few days, you open up a newspaper or switch on the television. This crisis is a media event, there has hardly been a newspaper where the problems with the cartoons doesn’t fill pages. A real European media event. Editors in the different European countries are closely watching the behaviour of their counterparts abroad. The English tabloid press is clearly holding back. The managing editor of the French newspaper ‘France Soir’ was dismissed, the internet edition of Germany’s ‘Der Spiegel’ refused to publish the cartoons while welt.de on the other hand, decided to allow the pictures to be published.

The altercations regarding the cartoons touched the very self-esteem of professional journalists: how far is freedom of the press allowed to go? It is a coming to terms with their own roots. The philosophers of the Enlightenment were convinced that freedom of speech in the press leads people to recognise their inner self and makes it possible that their biggest gift, good sense, could be freely practiced.

Jyllands Posten wanted to test if this ‘good sense’ was still valuable in Denmark. But what was the trigger? The author of children’s books, Kaare Bluitken, could not find an illustrator for her book about Mohammad. So editors of Jyllands Posten invited caricaturists to draw their own impressions of the prophet.

Though with this, the editors of the Danish newspaper have done a disservice to the values of the Enlightenment. Mohammad could have been drawn, but why with a bomb on his head? The drawings were a targeted provocation, not a useful contribution to the debate on freedom of speech in Denmark. Every newspaper which reprinted the cartoons is not protecting one’s right to free speech (which in Europe is in no way endangered), but is adding fuel to the fire.

Reasoning and appeasement in connection with the Muslim world appears more appropriate. Frustration is running deep. Issues regarding colonisation are still going through their heads, mixed in with their countries’ lack of development compared to the west, and hate towards dictatorial leaders, who – not infrequently - were in alliance with the West. Islamists draw crowds because their hate slogans channel this bitterness. And the regimes tolerate the demonstrators, as they are scared of them.

Only the pictures are remembered

Yet even if no other European newspaper had reprinted the cartoons, this would not have pacified the situation. Most newspapers endeavour to obtain an accurate report. Politicians broadcast well-meaning appeals and Islam-experts publicise analyses - yet the images remain in people’s minds. A photograph of a bearded Islamist in front of a burning embassy has a more profound effect than a full-page explanation from Islam experts in ‘Le Monde’ or ‘FAZ’.

This is not the journalists’ fault, but that of the structure in which they work. Newspapers are dependent on readership and advertisers. When there is a hot topic, it needs to be publicised. A torrent of headlines and pictures floods the citizens, which readers can no longer cope with. The result; according to a new Forsa Institute poll 55% of Germans feel that Muslims in their country are an enrichment, but also a threat.