A bishop, a candidate mayor and the Prime Minister as...collateral damage!

Greek politics are often like a comedy show.. It all started yesterday, in Thessaloniki. Everyone was chilled and happy. Politicians were marching towards St. Demetrius Cathedral to celebrate the patron saint of the city and the liberation of Thessaloniki which happened the same day in 1912. Everything was calm and shiny when the ''bomb'' exploded.. 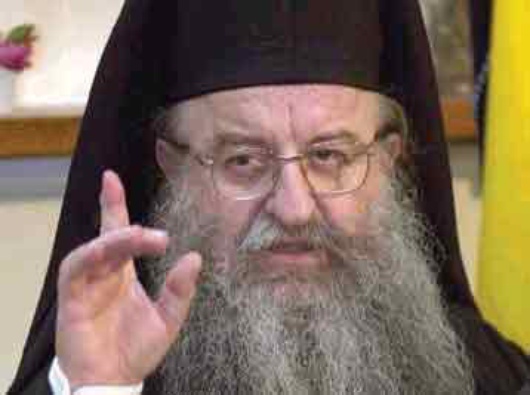 Anthimos (photo) is the local bishop of Thessaloniki and widely known for his nationalist positions (about Macedonia etc.) who shouted to the candidate mayor Giannis Boutaris, in front of the eyes of the Prime Minister! The reason: some days before Mr Boutaris called bishop Anthimos ''mujahideen'' and that together with the current mayor and perfecturer that they form a ''conservative triangle'' and that Thessaloniki has to get rid of them.. The result: the bishop denied to welcome the candidate mayor or shake hands. He told him ''As long as I live you will never become mayor if you dont recall''.

Beside that we had also ...a collateral damage. I am reffering to PM Papandreou who..heared all the complaints from the bishop and the demand to ..keep Boutaris down..! This is a bold three-days festival in Thessaloniki, indeed. But nevertheless, dear Mr Boutaris a wise advise would be to hold your mouth a bit. You know how conservative Thessalonians are, so just ''follow their waters'' as the greek proverb suggests in order for you to get elected. And another good tip is to remember the other wise greek proverb, that ''instead of knowing the Minister, its better to know the Bishop''.