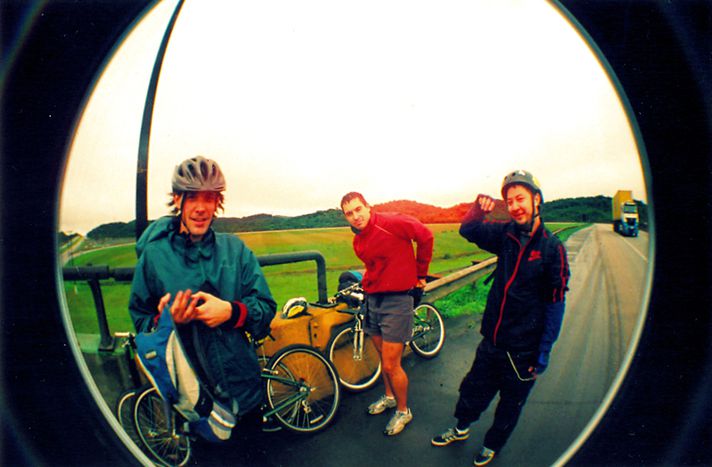 On 29 August, a group of Frenchmen in their mid-twenties kicked off a 50, 000 kilometre trip from Montpellier, and are somewhere on the Moroccan coast. Why would anyone do that...

‘Touring the world on two wheels’. When you say it, the sentence comes out fast, but it seems an enormous thing to do. And it is. It’s not about grabbing your bike and a bag and bob’s your uncle. The challenge, at least for Morgan, Christopher, Bertrand, Siphay and Brian, has been in the last two years of preparation: sorting out itineries, a budget, finding sources of funding, educating themselves about the conditions in each of the forty countries they will travel, weighing their baggage well…

The group have called their project Solidream. ‘We started working on it in the summer of 2008,’ explains Brian. ‘We started to think about distances, seasons, how long the voyages would take, creating an association to amass any funding and in a website – and you can’t do that in the blink of an eye.’ Brian hasn’t cycled off with his friends because he still has a job, though he intends to join the group within a few months. ‘Choosing the material was complicated,’ adds Bertrand. ‘Then there were matters such as health, insurance as well as itineries…’

The group have worked out that they’ll need 80, 000 euros to take a three-year cycling trip. They’ve managed to fundraise 30, 000 euros thanks to contributions from their friends and companies who are collaborating in their project. They also dug deep into their own pockets. Apart from forecasting the future and concentrating on the details, they know they will have to be prepared for anything from healing injuries to finding a plan B to get across the Andes. When it comes to seasons, they’ve made sure they avoid the toughest times of the year such as monsoons in Senegal or Asia and Alaskan winters. Preparing everything now to avoid difficulties much later.

Why not switch to an engine ? 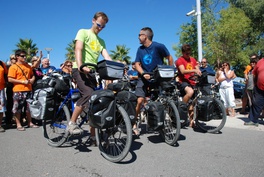 ‘Bikes are the best method of transports which can adapt to this kind of trip,’ explains Morgan. ‘They’re fast enough to avoid getting bored of the landscape and slow enough to be able to take in every region we will cross. Not having a car means we will have autonomy that we’re looking for. The modest allure of being a cyclist tripping around the world usually invokes sympathy and hospitality from people too.’ But bikes impact the trip on such a large scale, what with itineries and baggage, never mind the considerable physical effort it commands. ‘The physical challenge is there but we like that about it, it motivates us,’ Morgan continues. ‘In any case it’ll be harder than going to work in the car everyday,’ jokes Brian. ‘We know it’ll be interesting once we get to the mountain or windy areas, but we’re feeling ready for anything that could crop up.’Since the idea has been starting to take shape, it’s been clear that the group will want to communicate their endeavours back to their own little worlds. That’s why solidream.net was created from the offset. They are able to blog their trips and upload photos of the countries they are crossing. One of the aims of the trip is to raise awareness about the environment. ‘We’re going to try and meet schoolkids in each of the countries we go to explain how we feel about sustainable development and respecting the planet,’ explains Morgan. He adds that the boys are willing to roll up their sleeves and get involved in solidarity projects to ‘share their experiences with as many people as they can.’ They already have contacts in Chile and Laos, and are open for other propositions. 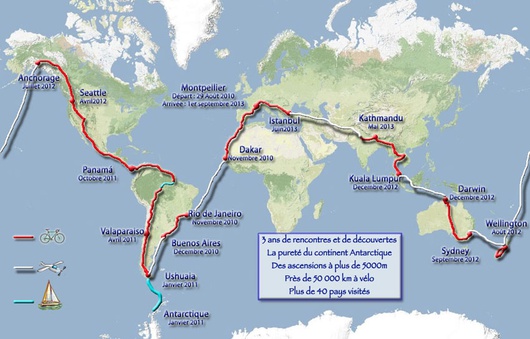 To use Bertrand’s words, this trip is a story of friendship and future meetings above all. ‘It’s a physical and psychological challenge; we’ve got the will, passion and solidarity,’ says Morgan. ‘It represents a chance to do something extraordinary,’ explains Brian. ‘I wouldn’t want to finish my life feeling it was all just stereotypical and regret not having done some crazy things. It’s now or never – we can’t wait until we hit sixty.’ The motto that the boys have chosen for their trip basically sums all this up, and comes from French Petit Prince author Antoine de Saint-Exupéry: Fais de ta vie un rêve, et d’un rêve une réalité - make a dream out of your life, and reality out of a dream.