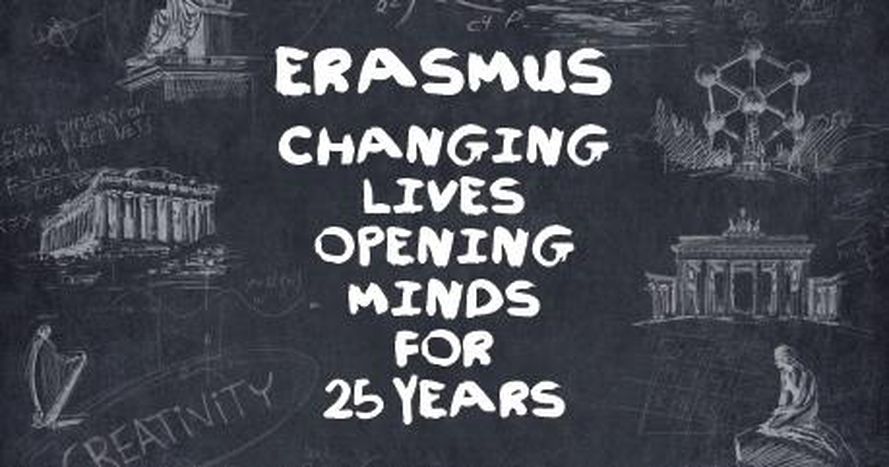 25 years on: Erasmus for everyone?

The European Union now celebrates the 25th anniversary of its most successful initiative ever, Erasmus. Students participating in the scholarship program, which originally aimed the construction of a joint European region in higher education, about lifelong experiences, self-realisation, and changes in their way of approach.

However, employers still don’t seem to give much credit to foreign experiences. Hungary has to face another problem as well: the interest in Hungarian universities has been quite low from the beginnings.

’Suddenly I had to become self-sufficient. For example, I got my very first credit card during Erasmus, and I had to see about it in the bank speaking German. This was a completely new situation’ says Piroska Bakos, editor and presenter for Magyar Televízió, spokesperson for last year’s Hungarian EU Presidency, who was chosen to be one of Hungary’s ambassador on the occasion of the 25th birthday of Erasmus. In the first place, she received the invitation because at home she was one of the first Erasmus students, spending one semester at the German University of Frankfurt an der Oder during the autumn of 1998, as the student of the University of Pécs. ’Some people returned their scholarships when they realized that they weren’t supposed to go to the great Frankfurt am Main, the onetime Western German Frankfurt, but to the Eastern German Frankfurt, a small town on the borderline’, she says. For the anniversary, two people were chosen as ambassadors from each of the 33 countries participating in the program, a onetime student and a professor or a coordinator. The ambassadors, who also have the role of a critic in the initiative, first met on 30th January in Brussels, where the European Commission opened the one-year long series of events. On the related conference the 66 deputies had a debate on the most important questions concerning the future of Erasmus. In May, their opinion will be summed up in a joint manifest in Copenhagen. Surely we can count on their opinion, since the organisers tried to select people as ambassadors who benefited from Erasmus and already proved to be successful in their profession, so that they can motivate the present and the future scholars. ’Erasmus gave me a massive push both in my life and later in my career, too. It was a kind of a catalisator, after which I tried to seize every opportunity to study abroad. That was how I got out to Germany several times as a student, then as a trainee at SAT1 and at the editorial office of ZDF, the public service television. It was a very positive experience both from professional and human aspect’, says Piroska.

Hardly trust the universities each other

Participants in Brussels mentioned four significant questions. Together with evolving the projections of research and development on Erasmus and the intensified popularisation of the initiative, one of the gravest problems turned out to be the admittance of credits obtained in a foreign university at home. Although the European universities now all operate according to the Bologna system, it still happens that the time spent abroad counts as a semester missed out in the sending institution. Since 1997, the teacher mobility program is supposed to improve the universities’ trust in each other’s educational standards. In 2007, it was supplemented with the exchange of participants involved in international relations in higher education institutions. The achievement of this goal would bring considerable changes mainly in case of those taking part in long and location-specific university trainings, such as students in medicine and law.

Students should work wherever their knowledge is needed

On the consultation of the ambassadors the need for the harmonisation of the demands of the labour market and the scholarships also emerged. As the president of the European Council, José Manuel Barroso put it, ’The program gives confidence, and offers an opportunity for youngsters to work in countries where the appropriate workplaces are available, so that they won’t get stuck on a labour market where their qualification is not needed.’ This problem is not of recent origin, the importance of the participation of companies have already been recognised by the EU in 2007. Since then, students have the chance to complete their internship at a foreign company, or to teach the stuff of companies in foreign universities. The latest element, the new project of the European Council was launched in 2009, under the name of ’Erasmus for young entrepreneurs’. The aim is to help young entrepreneurs to try their wings in international surroundings. While for Piroska Bakos, the steady German language skills gained with the help of Erasmus indirectly brought her a reporter-presenter job a Magyar Televízió, youngsters who recently participated in the Erasmus program were asked by cafebabel.com, and they couldn’t report on the appreciation of the employers seeing the Erasmus experiences in their CVs.

András (27), who spent a semester in University College London in 2007, could make use of his knowledge primarily at school. ’I enrolled into all the libraries possible, including the British Library. Using the scientific literature that I got to know there, I could easily ’cook’ a class composition and a thesis even two years later.’ Anna (23) spent a semester at Tamperei University, Finland, and she would gladly be an Erasmus scholar again. She described the professional advantages as follows: ’A foreign scholarship might impress the employers, but it wasn’t emphasised when I was accepted for my present workplace. Anyway, wherever I applied, I have always been called back so far.’ Programs aiming the involvement of employers are necessary indeed. According to Piroska Bakos, a detailed post-documentation of foreign studies would ameliorate the situation. Unlike the present practice, this way not only students would write their own evaluation, but the participating institutions would also give their opinion on each other’s work, which is – all in all – good for the student, the teacher and the institution as well, and later helps the employer estimate the real competences of the student.

Scholarships are worth less

Another highlighted aim of the Erasmus year is to get the sender countries to accept more of them in the future. Hungary is also amongst these countries. In the 2000s, 27.5 thousand Hungarian students received the Erasmus scholarship to study abroad, but the country was chosen only by 15 thousand as destination. ’This is related to many different things: first of all to language difficulties, but it has many political, economic and cultural aspects as well. Quite a few people still have strange ideas about the countries of the region: they often think this is the past socialist camp. To reverse the trend, Hungarian universities should also take action’, says Piroska Bakos. If Anna were a foreign student, she would be glad to come to Hungary, but only to Budapest. According to her, ’Erasmus students love this milieu, the ruin-pubs, and that this is not Eastern Europe yet, but it is not a real Western European city either. It is somewhere in between, giving it its charm. Gina (22) and Fruzsina (22) agree on this, although they haven’t been Erasmus students yet. According to their opinion, foreigners like Hungary, they get a lot of help, and educational standards are good. On the other hand, András would only choose the country in very special cases: ’It depends on what I would study and on my ascendants. According to my experiences, foreigners studying about this region or having Hungarian family are more likely to come here than others. The rest probably chooses Hungary because of the low prices and nice parties. As a foreigner I wouldn’t find Hungarian universities in the international gradiation, so based on professional consideration I wouldn’t choose it.’ Although Hungary is amongst the sender countries, only a trace of students in higher education, a tiny bit more than 1% take part in the Erasmus program. One of the main reasons is the fact that the scholarship is relatively low compared to the cost of everyday life in Western European countries, and Hungarian students receive little familial and other support. As a comparison, in 1997 Piroska Bakos’s costs were all covered by the 400 euros per month, while these days the average 350 euros, even affected by the decaying exchange rates, are barely enough to pay the student residence. András adds that when he attended to Erasmus, the coordinators informed him that the amount of the scholarship had become less because of the increasing number of participants, meanwhile the overall amount remained the same, which is why it leaves less per capita today.

This year, the total number of Erasmus participants will reach 3 million, and forecast says that the most popular destinations will be Spain, France, the United Kingdom, Germany and Italy, and the most Erasmus scholars will be sent by Spain, France, Germany, Italy and Poland. The aims are to broaden the overall amount to five million, to bracket all the programs (’Erasmus for All’), the raise of the budget is being discussed in the European Parliament. How Hungary will be able to benefit from the new system will supposedly be deeply affected by the changes in the higher education system, like the drastic cuts in tuition free places, or the grinding disapproved by the EU as well, which despises exactly the foreign experiences of the students, worsening their chances on the international market.