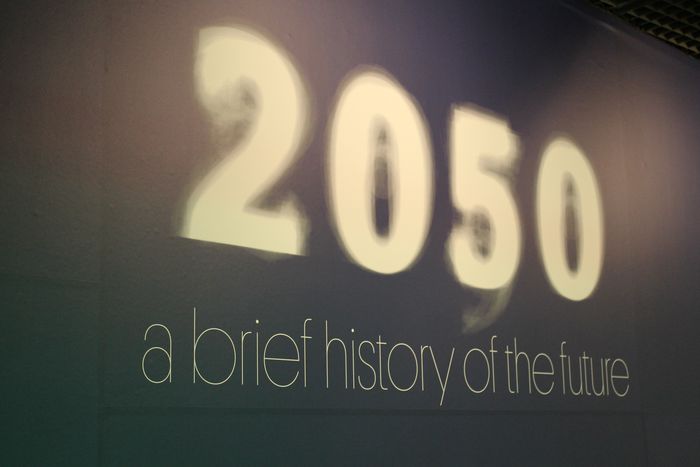 Is 2050 a distant future or are we already there? The time and space dimension seems to erode when you walk through the exhibition “2050 – a brief history of the future” in the Brussels Fine Arts Museum. Let’s take a look before it ends next Sunday.

Forecasting is enshrined in human nature since ages but anticipating the future has emerged as a trend in various disciplines. Some of the works in this area have made a major breakthrough into public domain, as it is the case of Jacques Attali’s book “A brief history of the future”, which inspired the exhibitions in Brussels and Paris.

Arising from important and complex matters such as global conflicts, social and economic inequality or mutation of people and cultures, the artistic work present in Brussels provides a vision full of imagination, critique and sometimes humour. Those works welcome you already in the large entrance hall with David Altmejd’s sculpture of a giant and Yinka Shokibare’s “Space Walk”.

Even if you are not familiar with the book, you immediately may get a good understanding of the idea of the five waves awaiting the humanity in the next decades thanks to the video at the entrance of the floor hosting the exhibition. From the decline of the American empire the humanity will go through the stages of a polycentric world, the hyper-empire and new conflicts until the rising of a hyper-democracy. This is the leading path of the exhibition centered around 8 themes.

Beyond the Tower of Babble

A strange and hypnotic sound captures your attention when you enter the big hall showing converging images of people in a library. The slow moves and light contrast allows you enter the discovery path. But while you’re there take a look at the tiny figure of Venus from Galgenberg, dating from the Palaeolithic era. Some steps further you will discover its modern version thanks to 3D design and printing techniques and start thinking if we really evolved so much since then.

Your vision changes when you come to the next room. Look with attention at Alighiero Boetti’s “Mappa”. Are those countries still the same today? Is there something else missing? On the opposite wall the fluctuating “Net.flag” points out to the new territory of internet. The main piece is however the “Tower of Babble”, which sarcastically illustrates the decline of the American empire through a famous fast food iconic person involved in scenes of cruelty and decay. 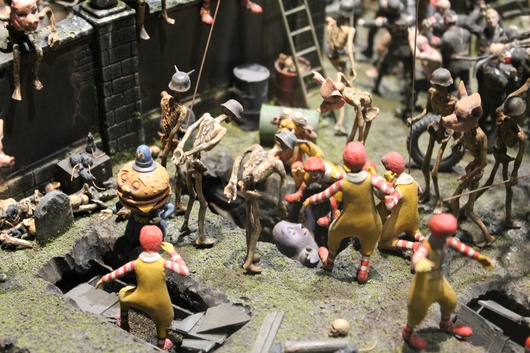 Moving further you go through the dark room looking at the nice piece called “Fleur de Lys”. Nice in colour, but it shows the effect of a nuclear accident. The impression of threat continues in another room with a very expressive “Plastic reef”. Is the expansion of petrol companies shown in the quickly moving map the source or the consequence for the use of this material for artistic expression? Will natural resources run into scarcity to feed and heat us? Before it happens you are invited to join the “Feast of Trimalchio”.

Virtual reality or internet of things sound familiar already today. The impact on people’s future of such developments has also been already imagined. Overconsumption and obesity (the “Matrix of Amnesia”) will become a form of protest, as labour market will become more demanding and asking for ever increasing mobility in a "rich man’s world" where states will disappear and let a hyper-empire appear. Could time become a monetary value in such a world? Some artists think so.

History of humanity has been driven by wars. The wars in new form appear as form of rejection of the established religious, economic and societal order. “Santo Guerro” guide us through this warzone! And once you move further to greet the new humans (or mutants?) would you have a seat on weaponry made chair and “Dream of a better world”? If it's so then let’s move to Utopia.

If humanity survives the conflict era the power of good will prevail over evil forces. A new democratic planet will allow the humanity to work together, in the spirit of altruism, for a sustainable harmonious world. Will it adopt the flags imagined by Peter Fend? Will people live in cities like Kimbebele Ihunga? “Another world is possible”.

Was a presence in Brussels necessary for the exhibition? An affirmative response has been given by Jacques Attali himself. The city witnessed a cross-cultural exchange over centuries, with Latin, Germanic and Flemish influence directly inspiring artists. And of course, being currently the seat of European institutions it was natural to show the position of Europe not only in history, but also in the future.

Those visions of the future were explored by ENSAV/ La Cambre arts school and the Institute for European Studies at Brussels Free University (ULB) and are shown in the Europia annex. Are those visions an Utopia or a reality? If you were not aware of, Europe is not only present in its geographic boundaries. Have you heard of Saint Martin island and other bits of Europe spread around the world? Would Morocco apply to enter the EU? Where is Turkey in the process?  Eye-catching pictures and detailed explanations will increase your knowledge about these issues.

The exhibition ends on Sunday 24 January 2016. So hurry up to see the different pieces and discover also the multimedia side of the work exposed.

You can best enjoy the visit with your smartphone or tablet using the exhibition module available in the free “Fine Arts Belgium” application (FR, NL, EN versions).

Don’t forget to send a picture from the machine standing at the end of the visit with your wishes for the future or interact through the different social media and the website.