Not one or two, but crypto Christians in Turkey are about 15,000,000 million according to the well-known journalist Nikos Chiladakis.

The reporter after years of research, submits full documentation with data, many of which come straight from the Turkish press!

Moreover Nikos Chiladakis argues that according to data from Turkish newspapers, sales from Gospels in Turkey exceed 8,000,000 copies, which make it a best-seller! Note that they were printed in Turkish!

In the past, during previous public lectures, Mr. Chiladakis highlighted the special religious character of our neighbors, emphasizing the ''irregular'' islimization of Asia Minor over the centuries. Examples of this ''irregularity'' are the mass pilgrimage made by the Turks in the Greek Orthodox monastery of  Saint George Koudounas in the island of Büyükada (Pringipos) and the holy water of the Archangel Michael.

I have personally experienced the incident on the day of the feast of St. George in Büyükada and we were stunned by the crowd who went there to pray. They used candles, they were kissing icons and performed general practices which are either not customary or rejected entirely by Islam (eg the adornment of the icons). 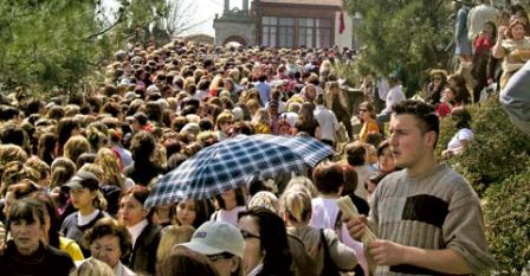 Turks (!) are gathered for a pilgrimage in the Orthodox monastery of St. GeorgeKoudounas in Büyükada island, outside Istanbul

Let me point out that during the pilgrimage we found some Greeks who live in Istanbul. We asked them if this pilgrimage was an old custom when the Greek community of Istanbul was flourishing ( Before 1963, the vast majority of the population in these islands were Greeks). They told us that it was not and that this started only some years before. This quite paradoxical religiosity performed by the Turks is relatively new!

Equally impressive is that according to the distinguished journalist, no newspaper and no media in Greece accepted until now to raise the issue and present all this amazing material about Orthodoxy in Turkey! ... Is Erdogan's turn for the Ecumenical Patriarchate associated with these claims?