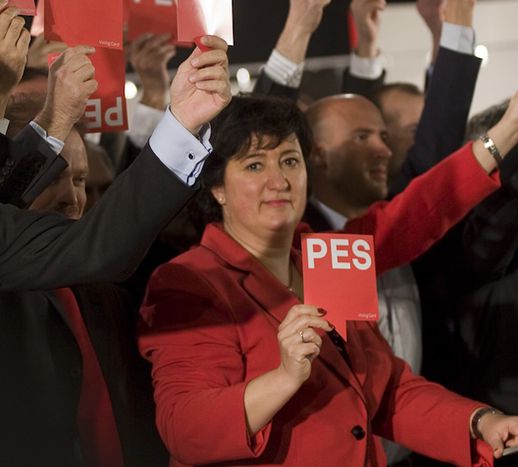 The socialist, 43,  demands feminism from European leaders. While she renews her candidacy for the European parliament, she dreams of seeing Poul Nyrup Rasmussen, the socialist president, as president of the European commission, after Jose Manuel Durao Barroso's term is up

After the non-conformist referendums in France, Holland, and Ireland (on the constitution in 2005 and the Lisbon treaty in 2008), MEPs need to better communicate on the ground with their citizens. That's what Zita Gurmai thinks; she gesticulates vehemently, almost OTT, as her torrent of demagogic ideas escapes from her lips at the speed of bullets from a machine gun. She has no intention of letting any voter she’s met get away from her.

'As an active woman, I think that more could have been done in this mandate,' says the Hungarian MEP, who fights for women’s rights and for general equality. Nevertheless, she thinks that the current mandate that is drawing to an end has been satisfactory from a political standpoint. She founded the REACH directive to protect citizens from harmful chemical products, and the directive on roaming regulations, which reduced the price of mobile phone calls made outside the subscriber’s country; these are just a couple of the landmarks of the past five years. She says simply that she is 'proud of the work that has been accomplished' by liberal commissioner for media, society and information, Viviane Reding.

How has the European socialist group defended the rights and expectations of citizens?

As you know, I am president of the socialist women in the European parliament, so I will give you an example: during the 2006 football world cup in Germany, the socialist women put pressure on parliament so that the EU became more aware of the prostitution which was rife during the championship. We managed to get the conservative ex-commissioner Franco Frattini to pay attention to us and to increase the amount of money parliament gave to countering this, with the European Daphne programme that helps women.

What European norm bothers you the most?

Which rule are you the most proud of?

That is the one that attacks the difference between salaries for men and women. For equal work, women are paid 15% less than men. It’s as if we work 54 more days a year than men do.

Do you consider yourself a feminist?

Yes, but I know it has negative connotations. I want to do a good job for women, those who are vulnerable or disabled, as well as gypsies. Feminism deserves a positive face and there need to be more male feminists. Look at Norwegian society: by law, 40% of business administration council positions must be occupied by women…

Are there any European leaders, aside from the Norwegians, who are close to your feminist ideals?

(Spanish prime minister Rodriguez) Zapatero, of course! But we don’t only need them on the left, we need them on the right too. The Hungarian commissioner, Vladimir Spilda, has also done a lot of work in this field. And then there is (current EU commission) president Durão Barroso, who has replaced every retired male commissioner with a woman.

Is the situation of women in eastern Europe better than that of women in the rest of Europe?

So, what must the priority be for reaching gender equality in Europe?

Firstly, to obtain economic independence. Then, understanding that the traditional model of a family is not the only one that exists.

Men need more love, because if you have more love you live longer, and if you balance work with family, you get more love

Lastly, we need more commitment from men to family life. From my personal experience, my oldest child is twenty and only spent the first three months with his father; that didn’t happen with my second child, and his relationship with their father is completely different. And one last thing, men need more love, because if you have more love you live longer, and if you balance work with family, you get more love.

Did Europe do the right thing in the gas crisis between Ukraine and Russia?

Energy is a national rivalry. In the case of Hungary, which gets 90% of its gas from Russia, it has allowed us to prove our solidarity with Slovakia, to whom we provided gas at the critical moment.

Who do you see as the next EU president?

If we’re talking about my European dream, it would be a socialist. But I am a realist and I know that while there is a majority of right-wing national governments, it will be one of those. I could see Angela Merkel doing a good job: she has done excellent work during the German leadership of the EU (the first six months of 2007). However I think the men are going to elect Barroso again. From the point of view of gender equality, he has done good work.

And if the socialists had the most votes?

Then Poul Nyrup Rasmussen. He could lead us to the new socialist Europe.