"I know people, that is good they left, this country won’t struggle without having them around," said Italian Labour Minister Giuliano Poletti of the young Italians migrating abroad, adding that those who stay "aren't all idiots." Not only has the political elite sacrificed a generation, it has made no attempt to understand them. [OPINION]

They used to be called the "boomerang generation", but now sociologists have come up with many acronyms and labels for them: Neets ("not in education, employment or training'); "startuppers", if they dive into the great fairytale of modern economy and entrepreneurship where one on a thousand succeeds. Maybe. And now some apparently need to be "kept away." So who are these Italian Millennials? Spoiled, lazy children, addicted to their smartphones, forever teenagers unwilling to grow up? Or perhaps more simply young adults seeking a normal life, like their fathers and grandfathers?

It's useless to hide behind labels: Generation Y, in Italy at least, won’t have the same quality of life as the Baby Boomers, nor as their grandparents who, after the suffering of the war, lived in a society where there only way was up. Yet, between this legitimate aspiration and a youth unemployment rate of 36.5%, and the exodus of tens of thousands of young Italians abroad and the work ‘paid’ by using 12.5 million of those magic tickets called vouchers, a third way is possible. A different way to have not the dream job, but at least a job to live serenely, to settle down, or simply to leave the parents’ house and find a place in the world.

At this point we should add that, according to Eurostat, 67% of young Italians live with their parents. In France it's 34.5%, in Germany 43%, in the United Kingdom 34.3% and in Denmark 19.7%. In addition, 2015 saw the birth of 488,000 newborns in Italy, the lowest birth rate in Europe. The reasons are obvious: the lack of welfare policies and the difficulty of finding employment results in Italian mothers being the in Europe - often referred to as "missing" mothers - who have to choose between work and family. Italy has the second-lowest number of employed women in Europe (only 57% aged 25-54), but a birth rate of just 1.3%. In Sweden, where 83% female population work, it's 1.9%. We haven't forgotten the questionable campaign by Health Minister Beatrice Lorenzin which attempted to raise the birth rate, shaming young women instead of fixing genuine problems with the welfare system. 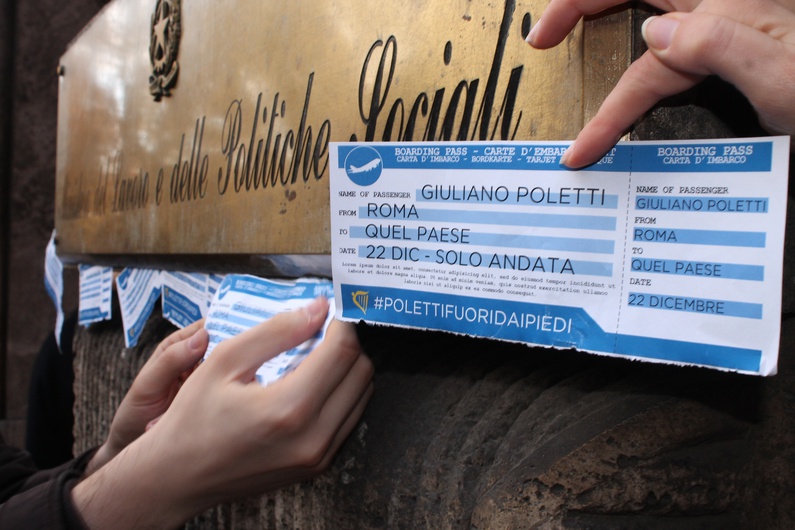 Now, let’s talk about employment. How can a minister in a country that is losing an entire generation claim to know "some youngs who left Italy," and "that’s better that they're no longer around" and to insist that "those who stay aren’t all stupid"? Each of the tens of thousands of young people aged 18-35 who have decided to leave has a reason, happy or otherwise, to find themselves far away from their family and place of birth.  Their stories are squeezed into suitcases, their lives condensed to 23 kilos' (if they're lucky) worth of clothes and memories to carry around in wandering years; long-distance love stories with the hope to a far-off reunion; care packages with a small note from grandma; tears and smiles on Skype; nights spent on booking plane tickets to come back for Easter or Christmas.

Paoletti is right when he says the young people who stay behind aren't stupid. But he has also omitted the truth. Many young Italians, stay because they have to. Because they couldn’t afford the plane tickets, or they weren’t brave enough to take a step into the unknown, or because they came back full of regret.

Be aware that it’s a hard choice. The great cities of Europe might seem like utopias, but the hard truth is that not everyone survives in the jungle of London, Paris, Berlin or countless other cities, where you’re a drop in a limitless ocean.

Then there are the Neets. They are found all around the continent, but in Italy they make up 27% of the population. They don’t study, they don’t work, and they don’t seek a job because they are discouraged by a state system that has forgotten about them, and that doesn’t understand them.  Some have tried, but they have given up, others perhaps need to be encouraged, yet it wouldn’t do enough given the status quo. We shouldn't forget the army of temporary employees, who are told that permanent contracts don't exist anymore and that flexibility is gift, as it means freedom and opportunity. Such (unsolicited) advice always from those at the top, from those who got a job at the age of 20 and haven't left the firm since.

For years, Italian policymakers have been ignoring young people. Or rather, they've been failing to understand them. The government, which has crowned itself as a champion of change, is a million miles from the generation that destroyed it in the constitutional referendum; that chose not only to defend the old Constitution written by their grandfathers, but also to put into words the distance between their problems and the political agenda.

The daily L’Espresso has published an unflinching letter from a young Italian researcher who lives in France. The title says it all: “Dear Poletti, you have made us the waiters of Europe.”