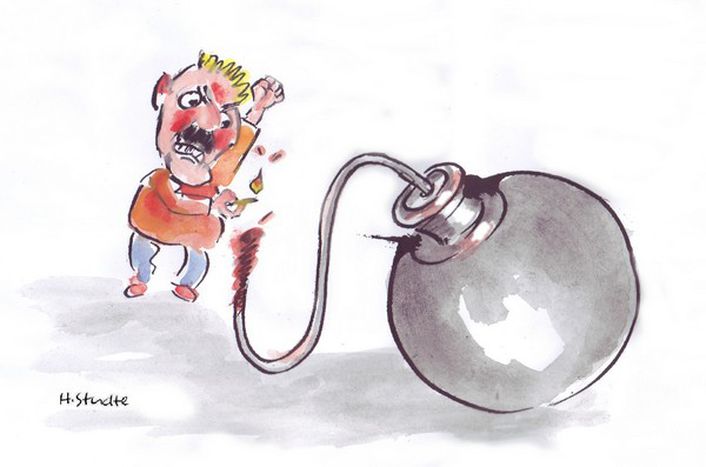 Don't be alarmed if you hear a Spaniard declare that he's 'up for a bombing'. He doesn't intend to launch an attack; he's just an enthusiastic person, which can be misinterpreted as being a bit loopy

A Spaniard who uses the phrase me apunto a un bombardeo (I'm up for a bombing) is the type of person who agrees to any proposition without giving it a second thought; whether it be a trip to the cinema or helping to lug a three-seater couch up the stairs to a ninth-floor flat. The saying apparently originates from events during world war two, drawing a parallel between enthusiastic impulsiveness and blindly air-bombing the world beneath. Spontaneous British counterparts would probably say I'm up for it or count me in. Such a stooge might be considered a yes-man or Jasager (yes-sayer) in German.

Like the Spaniards, the French are also partial to a war-related phrase. Although not quite as specific as the Spanish saying, être sur le pied de guerre (to be on a war footing) was coined by Honoré de Balzac and became popular during his time. It can also mean being at action stations, always ready and willing. This was possibly the French novelist's personal maxim, given that he spent fifteen hours a day writing. Maybe his brain had been spun around (gli ha dato di volta il cervello), as the Italians would say about someone who has lost the plot.

We could also refer to such a person as just plain crazy, suggesting they might feel right at home in the institution in One Flew Over the Cuckoo's Nest. Being cuckoo has become synonymous with having a mental state akin to the inmates in the popular American novel by Ken Kesey andb Czech-American Milos Forman film. Miec kuku na muniu, a Pole would say.

You don't have to be nuts to do stupid things. With friends we're normally comfortable clowning around, without needing to be as mad as a march hare or even a goat, according to the Spanish (estar como una cabra). Maybe we're all just a little kooky, or Schräger typ, if you're German.

Translated from Yo me apunto a un bombardeo