Wondering what Brussels will say

The Hungarian Higher Education Act is attacked at international level, too We have already reported about new developments in the Hungarian higher education. The scary draft of the new law on higher education did not leave any other choice for students than marching to the streets and protesting for their rights.

Probably most of them did not even think that people beyond our borders share their outrage – but this was proved wrong by Allan Päll, president of and Stephan Stainbach, advisor of International Bureau of who both attended the demonstration on 27th October and made speeches before the crowd of around ten thousand, beside their Hungarian counterparts.

Although the jokes referring to Rózsa [Rose] Hoffmann and the rose metaphor were quite lame, the transparents at the demonstration were actually a lot more creative. According to the organizers, approximately ten thousand people came together in front of the building of the Ministry of National Resources in Budapest (housing the State Secretariat of Education) to express their discontent about the controversial points of the new law on higher education, such as the obligation to work in Hungary, the (hidden) tuition fees and limitations on student self-government. Students’ dissatisfaction appeared on a national level, which was shown by the participation of representatives from universities and colleges from around the country. The importance of the case is highlighted by the fact that student governments from abroad provided their understanding and support for Hungarian youth on . attacked the whole current bill in the name of Austrian students, while did in the name of Norway and the European Union. What they found the most outrageous was the obstacles to looking for work abroad and the recently itroduced tuition fees that would be unaffordable for young people coming from a less fortunate financial background. According to Päll: Then he went on: Päll noted that such kind of forced restraint for the Erasmus generation cannot be a realizable concept and at the end of his speech he urged Hungarian young people to fight for their rights. He will do the same and turn to the European Commission to ask for verification if he saw that basic requirements of EU are violated to such an intolerable extent. 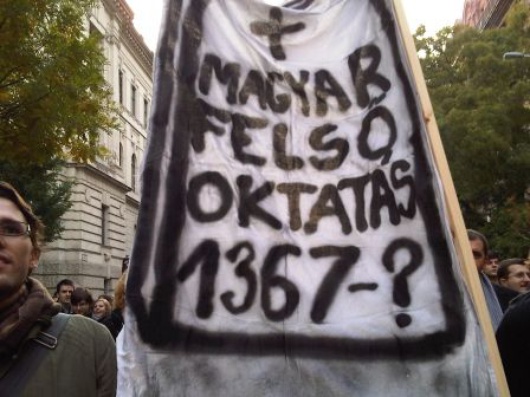 international levelStephan SteinbachAllan Päll„If Hungary really would force the students to sign a contract that after graduation forcing them to take a job only at home, the freedom of movement, which belongs to the founding elements of the EU, would be restricted .”„We are wondering what Brussels will say about these proposals or even if Hungary has discussed any of these points with them.”

, President of the , has spoken out against the obligation to work only in Hungary, which affects future doctors the most. A recently published initiative, which divided the public opinion, proposed that the government would give extra financial support in the amount of 100,000 forints (around 320 euros) for 620 medical students every month during 5 years to make them stay and work in the country for 10 years and refuse taking tips from their patients. In case of breach of contract they should return all the funds they have received until then plus interests. The majority of Hungarian medical residents are unwilling to sign the contract arguing that this is nothing but a temporary solution and the monthly 100,000 forints after 5 years will be still missing, and there will be nothing left to make it up. Others do not want to loose the opportunity of accepting an offer they can't refuse even from abroad because of a scolarship which is only enough to keep their heads above water during the years of residency. Although the initiative did not bring the house down, the government is not willing to give up its prerogative of forcing graduates to work in Hungary. Moreover, they extended the proposal to all would-be students on state scholarship. Reflecting on this, Magor Papp also said the new graduates should not be kept here with signing contracts or force but with „appreciation of intellectuals” and providing working conditions which guarantee a good standard of living.

, president of the , also thinks that students are not treated like humans, as he said: According to him, Hoffman and her associates violate the fundamental interests of society with putting an end to state-funded higher education. The president of , formulated the question: The following speakers on the stage were the presidents of Student Unions from Budapest and the rectors of the five biggest universities in the country.

Between the speeches, the programme was completed with videos made by demonstrators presenting the students’ opinion about the Higher Education Act. The interviewees mostly agreed that they would not be able to pay the fees, so the interruption of studies or applying for other European universities where tuition is far not so high appeared among possible alternatives. Many of them remembered the referendum in 2008 about the introduction of tuition fees (proposed by the former government) and the irony of the fact that the current governing party (in opposition then) spent billions of forints to campaign against introduction of tuition fees back then.

The utopia of the University of Miskolc

The banners expressed the purpose and mood of the demonstration even better than the speeches. There were rhetorical questions (It is sin to buy a diploma… so? – Rózsa Hoffmann, why don’t you resign? – Higher Education Act [abbreviated FTV in Hungarian] = WTF?!), embittering visions about future (4 years of studies = 20 years of misery), proposals for solution (We want career not barrier!), but we could see caricatures of the system as well („If I want to pay for a diploma, I’ll go to the black market to get it.”). President of the Hungarian , closed the series of speeches shouting the simple but expressive word „ENOUGH”, followed by the ten-thousand-crowd in the street. Then the symbolical burial of Hungarian higher education was staged, where the torch-light marchers took a wooden coffin (on it: „Hungarian Higher Education, RIP 1367 - ?”) to the stage and the presidents of Student Union paid their tribute with wreaths to the „deceased”, in the name of the students. The grim, mournful atmosphere was further reinforced by the demonstrators who arrived in black coats, as asked by the organisers.