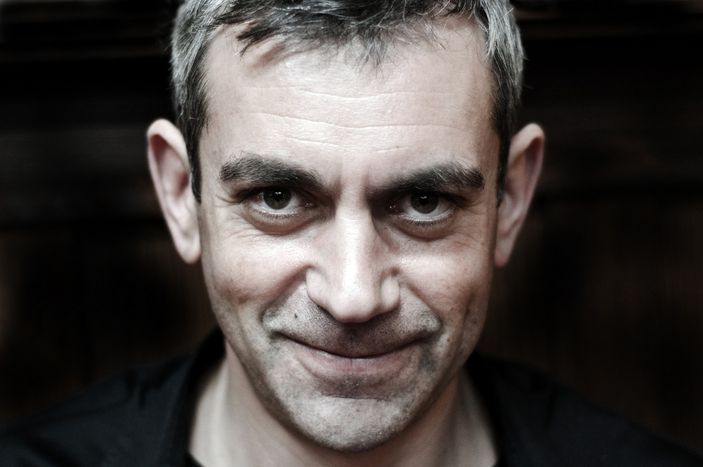 Wladimir Kaminer: I don’t give a damn about being a model for Russia

Talented author, but also a bit of a party animal in Berlin, the lively Russian Wladimir Kaminer, 40, knew how to capture and revive the ‘ostalgic’ image

‘A childhood in the ex-USSR is enough to transform anyone into a writer.’ This joke is signed ‘Wladimir Kaminer’. This Russian, like a cat, is not far from having seven lives; being a popular writer, an icon of the alternative scene in Berlin, an organiser of trendy parties and not least an aspiring candidate for mayor of the German capital. Talented at everything but not one to take himself seriously, Kaminer writes in German and lives at the heart of the bohemian-bourgeois area Prenzlauer Berg. As a sharp journalist he regularly spices up the columns of the daily newspapers with his pen that is in tune with the newest trends. The perfect model for integration? ‘I don’t give a damn about being a model for Russia,’ he snaps.' Such labels simply serve the journalistic purpose of dividing humanity.’

Born in 1967 in Moscow into a Russian Jewish family, Kaminer’s main focus in higher education was theatre studies. ‘Being part of a minority gave a right to certain advantages in the USSR: with the quota system I was able to follow drama courses more easily than other people.’ A resourceful and outgoing character, after a promising career as a ‘social parasite’ (actor), he decided to hit the road. The perestroika (a program of restructuring the Soviet economy) of the 1980s and early 1990s in the short term led to complete economic deterioration. At the first signs of serious jolts in the regime from 1989 and in the early 1990s, therefore, many disillusioned citizens didn’t think twice about packing their bags and taking the fastest way out of the Soviet-controlled area.

Kaminer, for his part, headed for Berlin. ‘It wasn’t I who left, but Russia who left me,’ he says without hesitation. After the wall fell in 1989, the remnants of the German Democratic Republic (GDR) was like a huge, uncultivated plot of land suitable for the creativity and expression of the many artists who had been restrained for decades. Permanent improvisation, dancing in the ruins. Everything was waiting to be reconstructed, invented, created. ‘Life is a joke but not everyone can laugh at it’: one of Kaminer’s many original mottos.

It wasn’t until he and his wife and two children had been living in Germany for eight years that Kaminer, now a dashing 30-year-old, threw himself into writing. ‘Of course at the beginning I only had a weak command of the German language, but I have always loved telling stories.’ It was mainly attendance at public readings that connected him with other young authors.

Recently, in 2001, his first work, Military Music, also known as the confessions of a child from the Soviet period, was published. Kaminer’s composition immediately hit the nail on the head: a bitter style, autobiographic fashion and a surrealist tone. First book, first success. This publication is consistent with the feeling of ostalgia (a feeling of nostalgia for East Germany: ‘Ost’ means ‘east’ in German ) prevalent in Germany in recent years: almost everyone in Germany has seen or heard of the film Good Bye Lenin, for example.

What is talent without circumstance? ‘I believe that my success does not lie in my origins but in my literary qualities,’ he insists. ‘I try to understand people. The readers feel that I am radically honest in my writing.’ In literature, this young man flees from bias. ‘I’m not like these French writers, for example, who devote themselves to the expression of feelings. I don’t see the point in investing serious effort into yet another pleasant Christmas story.’

At the same time, with his sarcastic but picturesque stories on the clashes and suffering experienced by the people under the Soviet regime - is he not afraid of giving a positive image of communism? ‘It is important neither to exaggerate nor to understate suffering’ he says, obscurely. ‘People should be thankful to Russians for having proven to the world that Soviet-style communism does not work. Theirs is a heroic achievement.’

Kaminer claims to be the first one to be surprised by the revival of ostalgia. All the same, for six years, the popular author was a self-made DJ, organising the Russendiscos (Russians’ discos) twice a month at the Café Burger. The parties were spiced up with pop from the East, between Polish, Russian and military orchestras, seasoned with socialist folklore. ‘At the start, it was about partying amongst friends in a slightly unconventional way, with a bit of nostalgia,’ he reminisces wearily. These parties have since become the obligatory rendezvous of the lively night birds ‘losing, at the same time, their underground edge.’ ‘It’s strange to realise how little people really knew of our lives,’ Kaminer points out. ‘We know more about the West than the West knows about us.’

With a nonchalant air, the Russian emigrant likes to give expression to his political conscience. ‘Of course one must get involved in and fight politics. Otherwise one becomes complacent. All of my literature is the product of a political maturing process.’ So serious is he about politics that one of his more recent projects is to become mayor of Berlin. Further, he sees the G8 as being limited to ‘a garden of children.' Regarding his native Russia, he deplores that ‘the country has not been successful in separating the business from politics. After everything was bought, the oligarchs also wanted to acquire political power: the State. The only way to give security to the institutions was to appeal to the KGB (the Russian secret service). That is what Putin did, without spilling the slightest drop of blood.’

Europe remains a fascinating subject. ‘I certainly missed the demolition of the USSR,’ he resumes, ‘but I have lived part of the evolution of the EU, and continue to do so. Although uncertain, the future of the Union seems much more exciting to me than, say, Turkmenistan’s next dictatorship.’ Indeed, Kaminer believes that the future might still hold ‘nice surprises for the development of Europe.’ However, our character’s political enthusiasm is highly critical: ‘optimism is the result of state propaganda to placate imbeciles’ he warns.