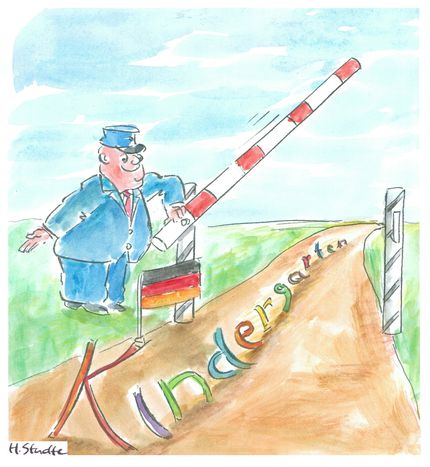 We simply can’t help it. It’s practically impossible for a European to speak his or her native language entirely. Expressions crop up which have (almost) been taken on word for word from other European languages. Maybe the Norwegians should exercise caution though with their 'Vor-' and 'Nachspiels'...

The main reason for word transfers comes from the fact that one country develops a new concept for which the other nations don’t (yet) have a word. This was the case for the most well-known European wanderwort (and there’s another one!), the German kindergarten – a concept which developed in Teutonia and was subsequently exported to England and then to Italy. Cross the Atlantic and the hard-working Americans have even developed the concept further; they also speak of kindergartening and kindergartner.

Words are particularly likely to spread when their birthplace is dominant in the corresponding speciality and is imitated by other nations. Thus, English informatics expressions like bit and bug can be found in all corners of the continent, as can management vocabulary such as, well, manager and marketing. Over the last few decades European languages have been enriched by Italian musical terms (piano, adagio), French military vocabulary (such as batterie – in English battery - and brigade) and German scientific words (Wirtschaftswunder for rapid economic development and Volkswagen, meaning 'people's car', for small vehicles).

As loan words mainly come from areas in which the export nation was or is innovative, they often represent (supposedly) typical traits of their country of origin. This can relate a positive picture, such as when Europeans use the Russian word intelligentsia for the educated elite, Italians and French borrow the English term weekend for the week's two beautifully free days of leisure and British character Brigit Jones uses the German intellectual expression zeitgeist.

However, export words don’t always paint a flattering picture. Many Europeans use the Turkish paşa or Spanish macho to denote a chauvinist (a word itself borrowed from the French), while in a more extreme example the Russian word pogrom is used to denote mass persecution of minorities. The Germans too get their comeuppance: the Danes call mullets Bundesliga-hår (federal league hair), with the hairstyle seen as characteristic of players in the the football federal league. The English meanwhile talk of unassertive German angst, Swedes of irritating besserwisser (clever clogs, literally ‘better knowers’), the Czechs of deceptive hochstapler (conmen) and even the French, normally so proud of their own language, talk about the threat of waldsterben (dying forests).

Words don’t always remain intact while journeying through Europe. Most of them have to put up with a false accent at the very least. The French cul-de-sac has made it into English – but unlike the French we pronounce the ‘l’ in ‘cul’ (which is slang for bottom). Changes in meaning are also widespread – and these can be piquant: the Norwegians have borrowed the German expressions Vorspiel (pre-drinks) and Nachspiel (after-party); in Norwegian they describe the consumption of alcohol before and after a night out. Yet the original German words refer to foreplay and post-coital activities. So be careful – you may think you know what you’re talking about…

European languages are engaged in constant give or take, even if they differ in activity (England and Germany are heavy exporters) and receptivity (the French try to refuse imports).