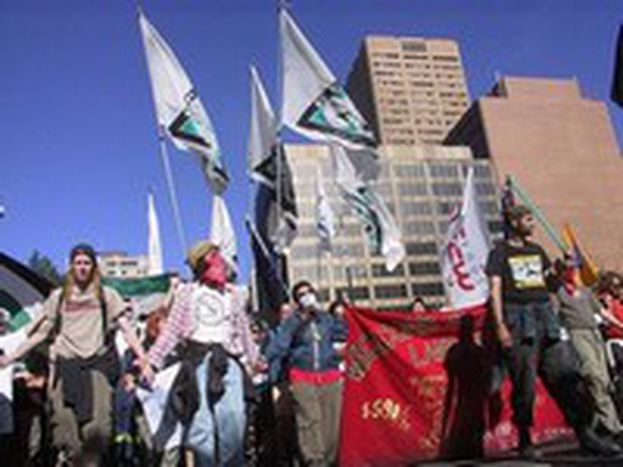 Whatever happened to another world?

Activists are preparing to decamp for the G8 in St Petersburg. Despite this presence, some of the media claims the alterglobalisation movement is finished. French activists are not so sure…

It all started so promisingly. In 1999 protests erupted at the World Trade Organisation (WTO) ministerial meeting in Seattle. Ten years after the fall of communism, the left seemed to have found a new face.

And it looked completely different.

Where communism seemed rigidly hierarchical, the Seattle protestors formed networks of groups – a decentralised form of protest for a decentralised global economy. Communism tolerated only rigid adherence to the party line. In comparison, the protestors, at the chaotic social forums that started in Porto Alegre and spread around the world, didn’t even agree on an agenda, let alone issue a definitive statement. French farmers and African activists stood side by side in Seattle. The former marching in support of protectionism and the common agricultural policy, the latter marching to break them down. They marched alongside Spanish autonomists and, yes, old communists.

Between 1989 and 1999 only one thing had stayed the same: the enemy. Except this time it was called ‘neo-liberalism’ rather than capitalism. It was the one thing all the protestors could agree on. The media, in a fit of short sightedness, dubbed them “the antiglobalisation movement.”

Six years on, and the media claims the movement is all washed up. September 11, so the logic goes, reminded people of the real problems the world was facing and the alterglobalisation movement, as they prefer to call themselves, vanished from our screens. The activists I spoke to were not so sure.

“It’s always the same with the media. They create an image and then expect reality to fit their image of it. The media turned us into a bunch of Luddites who were just anti-everything. But we are the most globalised of them all! The media was searching for something to make an issue of. But the phenomenon underneath the label, that really existed. And it still does.” Eric, an earnest French activist fighting for the rights of immigrants, adds “I’m doing activism everyday – campaigns, protests, raising awareness. This is the stuff that really counts. But it slips under the media’s radar – so they think we are finished.” He continues, “The huge protests, the social forums – they had a symbolic power, and I made a lot of connections with people from all over the world, but they are not where we do the real work.” In Eric’s vision, the alterglobalists are continuing to struggle, but silently, out of the range of the cameras.

The movement didn’t disappear – it was never really there. It was the media that gave cohesion to something much broader than a single body moving towards a single goal. From the start there were deep divisions, primarily between those who wanted to work with the state and those who didn’t. Even within groups there are splits: in the large French group ATTAC the leadership is close to politicians like Jean-Pierre Chevènement, while the grassroots are much more radical. These divisions meant it was always fractured, always more of a multitude of currents, unified only by their hostility to capitalism.

“I think we won. Look back to Seattle; look back to what we were campaigning for: debt relief for poor countries, fair trade policies. Fast forward six years and look what we have gained: we have the Gleneagles debt deal; we have fair-trade companies starting up. We succeeded in making these issues mainstream. You know when I saw corporations starting to really invest in environmental policies, I thought something was really starting to change.”

Sophie now works for an NGO in Brussels which campaigns for environmental issues: “I think a lot of us grew up, realised that maybe you can do some good working in the system.” For Sophie, the movement petered out because it became absorbed in the mainstream.

Perhaps this is always the way one must understand social movements: we must look at the changes they make in the way a society thinks. In the same way that the legacy of 1968 must be judged not by street fighting on Parisian streets but by the way feminism and multiculturalism have shaped our culture, perhaps we also have to judge the alterglobalist movement not by the non-revolution, but by the traces of thought that have trickled down into the mainstream.

“Rubbish,” was Benjamin’s reply when I told him what Sophie had said. He continued angrily “Debt relief, fair-trade coffee – it is capitalism with a friendly face. Underneath, the engine is the same. People are still in the same alienating jobs, they haven’t done anything serious to reform world trade. From my point of view things have just got worse.”

Benjamin, a member of a French group of anarchists, continued to believe in violent protest. To the suggestion that the infamous black bloc, which periodically uses violence, put people off the movement, Benjamin retorted: “This is just media bullshit. No one considers the violence concealed in the commodities we destroy: the exploitation required to produce them. That is the violence people should be talking about.” For Benjamin, there was never an alterglobalisation movement, but a set of techniques. “You can see a continuity with the CPE protests in France – we were using the internet, using decentralised organisation. What Seattle made explicit was a new way of organising – people called it a movement because they haven’t understood the difference yet.”

Benjamin said he intended to go to the G8 to protest. Sophie has been quietly lobbying on the sidelines for months. The movement, if it did ever exist, has passed on into other forms.

Some names have been changed in this article at the request of the interviewees.