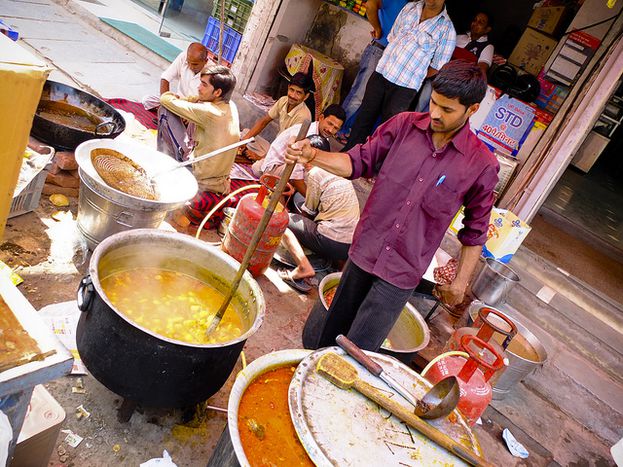 Although this may sound like the countless courses of a royal dinner, it is only a small selection of the bottles, bags and bowls that every snack bar owner in India proudly stacks up on his display shelves. Crisps and nuts don't just come in two or three flavours, but in 1001 delicious varieties which are all more or less spicy for a foreigner's palate. After all, India means masala, its world famous spice mix. Why would anyone want to eat sloppy salted potatoes if they can be hot and tangy? 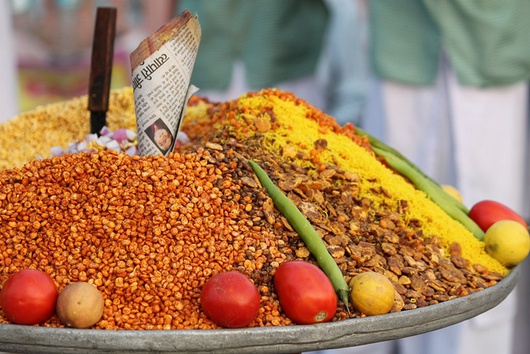 It is common knowledge that in India the simple things take a very long time and you might well find yourself waiting at least five times a day – for the bus, a government official or a friend. That is why snacks – called chaat in Hindi – are the best way to pass the time, right after drinking milky chai. While the crisp and nut mixes in their shiny colourful plastic bags clearly belong to the 20th century, snacks like bhel puri look as if 1000 years ago they had already been roasted in huge steel pans and sold in small paper bowls by turbaned street sellers. Among other things, bhel puri contains puffed rice, potatoes, onions, tomatoes and tamarind sauce and is usually topped with coriander and masala. The name and ingredients of this chaat can vary, according to the region it is prepared in, but it is always among the cheapest snacks you will find.

If the word snack reminds you of a sad and sticky chip shop, you would be pleasantly surprised by its Indian version because chaat wallahs have a very well developed sense for everything beautiful, just as all other Indians. No matter if they only own a simple street cart or an entire shop, they take great pride in decorating their display shelves with limes, tomatoes and plastic tinsel, creating an odd resemblance to Hindu shrines. Although this may seem funny, it isn't that weird after all because in India food counts among the many things that are in some way or other “holy”.

Nevertheless, there is a certain strangeness to Indian snack bars if you take into account that, according to the World Bank, one third of the officially poor of this world live in India. This means that 32.7% of the Indian population live below the poverty line. But as this benchmark is set very low, Indians often call it starvation line – if you live below it, you starve to death. How can this extreme poverty give rise to such an opulent snack culture? Maybe omnipresent hunger is the best explanation for the Indian culinary obsession; once you can beat your growling stomach, you have climbed up one rung on the social ladder. Whoever can afford to buy bhel puri and Fanta while waiting for the bus, probably also has a relatively good job and doesn't sleep on the pavement any more. 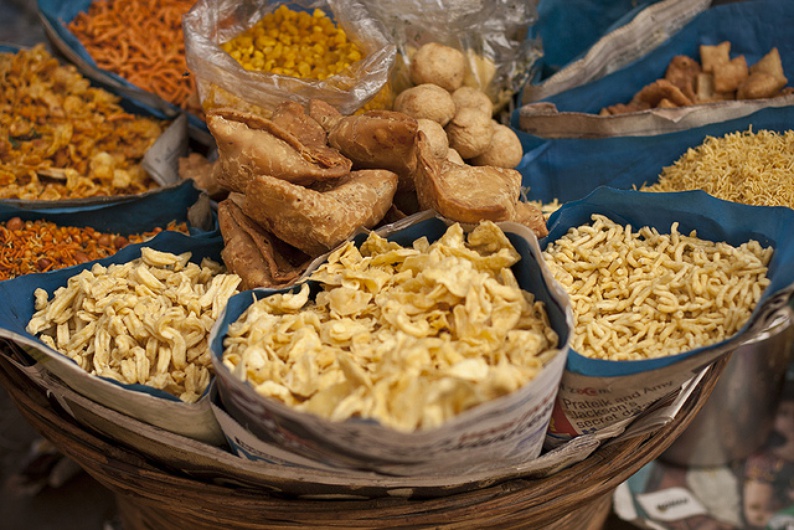 Hunger isn't the only nutrition problem that India faces either: Although this may seem absurd, the number of overnourished Indians is constantly rising, above all in cities, due to rapid economic growth and extreme social changes. You can easily tell who belongs to the new middle class by the size of the love handles around their waists, an Indian friend of mine explains to me. The bigger they are, the more rice, dhal and chaat go into their making and the richer is their proud owner.

However, most of the Indians you would meet in a normal snack bar can only dream of being overnourished. While the chaat wallah wraps greasy samosas in newspaper squares and fishes for a crisp bag on one of the shelves, the old man sitting next to him brews the obligatory chai. Most local buses stop just about long enough for you to buy and devour these spicy delicacies, but if you have already spent your last rupee on orange drops, your neighbour will probably offer you some of his crisps. Above all, snacks are a social treat in India and are therefore always shared – until the last peanut.