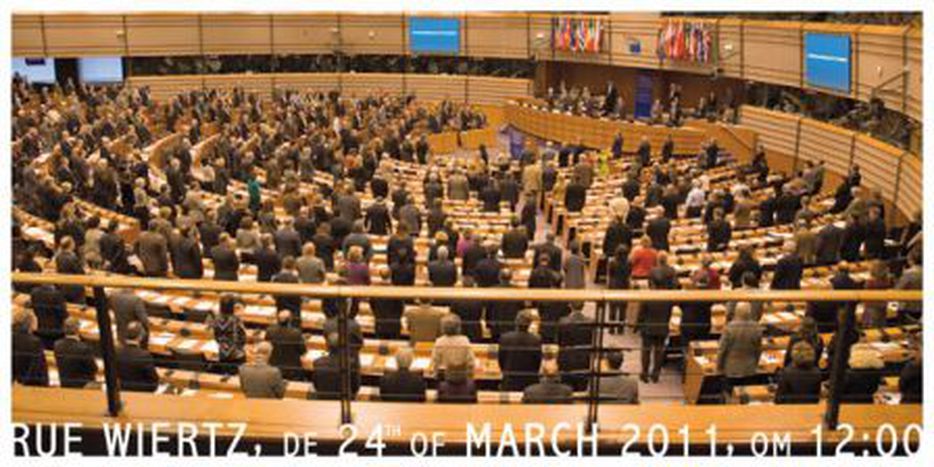 We all stand up for Brussels…

Over the past fortnight, Brussels’ citizens have been called to post a postcard to the Members of the European Parliament (MEPs). By doing this, they will invite them to stand up in the EP hemicycle on March 24 at noon.

We are talking about Postcards from the Future, an audacious artistic performance co-produced by the collective of Brussels’ artists C&H and the Royal Flemish Theatre.

This postcard is part of a series of nine, each of it depicting an area of Brussels around the same concept: to invite through a postcard to unite and build a vision of the world to come. And this time, the action is dedicated to the European Quarter and all Europeans can participate. The postcards are distributed in about 20 cultural venues in Brussels and are also available in all EU official languages on the project website, to send electronically.

The postcards show some MEPs standing in the European Parliament in Brussels. This scene seemingly ordinary could happen within a month if MEPs follow the invitation of the citizens, by simply standing up. This would make an important symbol in a city where the gap is widening between the expat community and the locals.

According to Christophe Meierhans from the Brussels artists’ collective C&H, the objective is to create a sudden moment of cohesion between two worlds that coexist, quite often without knowing or seeing each other. "This is a true test of democracy", he explains, “this involves measuring the ability of an (still for some) unfamiliar institution to gather people and put them in contact". In short, this collective wants to implement the EU's motto, United in diversity.

Gather in the EP’s hemicycle on March 24 at noon to see if the connection between citizens and MEPs will come true. Meanwhile, get down to work with your postcards!