One of the most anglophone French artists of his generation is releasing his fifth album, conceived somewhere between New York and Los Angeles. Back in France for a European tour, Wax Tailor was ready to give us his opinion on the hot topics of the moment: Brexit, political change, and terrorism.

cafébabel: You came up with the idea for your fifth album on the road in the United States. What’s over there that can't be found in Europe?

Wax Tailor : I can't really say for other European countries, but compared to France there's a lot more positivity. Here there's this pervasive atmosphere of gloom. Americans have tons of energy, and an entrepreneurial side that can even get to be too much sometimes. The first time I started working on a symphonic project, the Americans thought it was great. In France everyone immediately warned me about how complicated it would be. The funny thing is, we actually managed to do the project in France and not in the United States.

cafébabel: You go on the road quite a lot. Which European city has given you the warmest welcome?

Wax Tailor: Globally, I really connect with Eastern Europe. The first time I went to play in Warsaw, I wasn't expecting the kind of welcome I got. There was a real energy. In France, in the United Kingdom or in Germany, people tend to cultivate a sort of jaded curiosity about music. So much happens in Paris, in London, and in Berlin. There’s less of that feeling of "We don't want to miss this."

cafébabel: At the beginning of your career you organized the debut tour for the Swedish group LoopTroop. They say everything is perfect in Sweden, but is it true?

Wax Tailor: Well, I don't know if everything is perfect there. More than anything else, I think everything there is too expensive! But 15 years ago, LoopTroop was the best European band of its time, in my opinion. I started a project called Breathing Under Water. Its goal was to promote groups from outside of the cultural dominance of France, the United States and the Anglo-Saxon countries. I think it's important to pay attention to something besides mainstream culture.

cafébabel: You're featured on the soundtrack of Cédric Kaplisch's film Paris, and Klapisch is well known for his Erasmus film Auberge Espagnole. Did you ever leave France to study abroad?

Wax Tailor: No, but I would have liked to. I have to say, when I was in school Erasmus wasn't such an obvious choice. It seems like it's much more open these days. I even see lots of young people going to the United States. Personally, I would have gone to England, to London.

cafébabel: Do you have an opinion about Brexit?

Wax Tailor: Yes, but I have my own way of reading the situation. I think it's a very complex subject. When you ask someone if they feel European, I think there are other questions you should ask first. What exactly are we talking about? What does it mean to be European? Are we talking about a community of 500 million inhabitants who feel that they have a common destiny? Are we just talking about a political and economic structure that we know lacks substance? Brexit poses some very complicated questions. I hear lots of people saying that the referendum was ridiculous and that the English are all idiots, but I think that's an oversimplification. First you have to ask yourself what Europe represents.

cafébabel: What does Europe represent, in your opinion?

Wax Tailor: A disembodied political project. I feel like I'm completely disconnected from what's happening. I don't feel like I'm participating in its creation, either. I put my ballot in the box without believing that it would have any kind of effect. We have problems with representation, both in Europe as a whole and on a national level. We don't believe in our leaders anymore. They show a real lack of courage.

cafébabel: Is there anyone who might embody a new way of doing politics?

Wax Tailor: Manuela Carmena, the mayor of Madrid. She’s a former high magistrate who announced, as soon as she was elected, that she would remain in power for only one term, throughout which she would maintain her responsibilities as a citizen. She was supported by Podemos during her campaign, but what I like about her is that she's rethinking the concept of the career politician. That’s one of our main problems today. Those in power shouldn't be allowed to become career politicians, or to think of politics as a career. Because what drives people mad is to see the same faces every five years explaining that things are going to change. 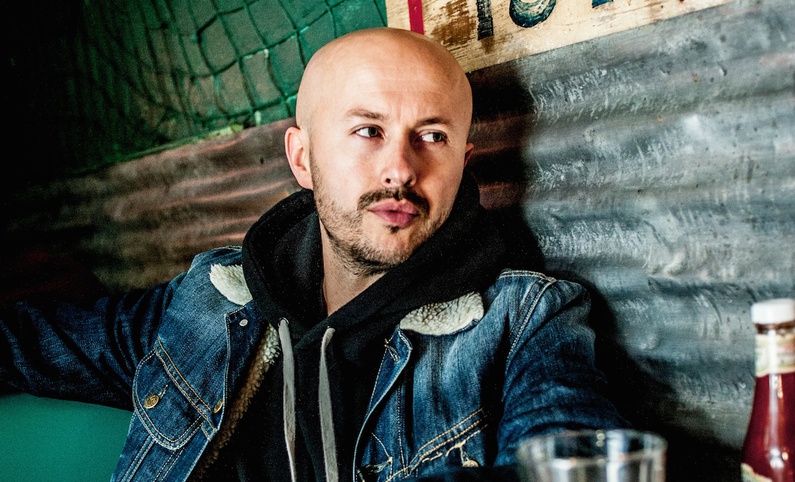 One of my earliest childhood memories is Mitterrand’s election in 1981. I remember my parents opening a bottle of wine, and the neighbours coming over to celebrate. That generation knew what political hope was. Of course, it only lasted two years [laughs]. We didn't experience that again until Obama's election in 2008, which was wrongly hailed as the arrival of Superman. But just the fact that someone was able to incarnate something, and that people wanted to believe in it, made me jealous. Someday I'd like to go put my ballot in the box for someone and not against someone. There are legions of us telling ourselves every time that we're voting for "the least worst." Nobody inspires us anymore.

cafébabel: You started recording your album around the time of the Charlie Hebdo attacks, and you finished it as the attacks in Nice happened. How did the shadow of terrorism affect the album?

Wax Tailor: It was like an enormous earthquake. I knew Charlie Hebdo from when I was a teenager. It was as if they'd killed members of my family. It was a sort of second 9/11, but of course the shock waves were much closer. We entered into a period of fear that definitely marked the beginning of the 21st century. Faced with all that, I just froze at first. Like a lot of people, I felt the need to distance myself from the commentary, from the live media channels that were spreading this obscene information... I felt like I was just out of it for six months. For example, I lost all natural contact with social media. I’m someone who never questions himself, but all of a sudden I felt like I needed to think hard about my own perspective. I questioned myself about a ton of stuff: secularism, religion, tolerance... Basically, there was a definite before and after.

cafébabel: You say you want to make people more thoughtful with your music.

Wax Tailor: And I've often been misunderstood. My methods, what I do, I like to see it as a kind of fight against stupidity. These days music is supposed to be smooth, everything is supposed to be smooth. And as soon as we say we're doing something thoughtful, we get called out for it. When I go see a Woody Allen film about Paris during the Belle Epoque, there's nothing political about it but when I leave the cinema I'm less of an idiot, more thoughtful. So when I see something lame or a crappy series, I feel like someone's shitting in my brain and that their goal is to make me dumber and more malleable. Thoughtfulness is vigilance.

cafébabel: Are you often misunderstood?

Wax Tailor: Let's just say that, these days, I tend to avoid expressing my opinions. Not to censor myself, but because I'm tired. For a long time, people made the connection between what I thought and my music. People said stuff like "If you don't agree with me, I'm not listening to you." OK, fine, but it's too bad. To go back to the difference between France and the United States, I talked politics with Americans a lot when I was putting my documentary about American independent labels together [the documentary, In Wax We Trust, came out the same day as the album]. In New York I ended up debating with a guy who supported Trump, a woman who was voting for Hillary Clinton, and a Bernie Sanders fan. In France, that doesn't happen.

Wax Tailor: In France we can be upsettingly apolitical. I don't know why, but it's a real problem that people are so uninvolved. When I talk politics with the French, they usually just say, "They're all rotten!” OK, so what do we do about it? What’s the plan? Another thing that bothers me is when people forget that musicians are also citizens. They’re shocked when we express opinions. But when you get up in the morning, whether you're a musician, a plumber, or a poet, you live in society. You can't be disconnected from it. The world is still the main source of inspiration for artists. Otherwise, what would they say to us? “Shut up and sing?"