Markéta Kutilová is a Czech journalist and humanitarian worker who has reported from the frontlines in Syria. After her first trip to Syria, she wrote (together with Lenka Klicperová) a book titled Within the Range of the Islamic State (Islámskému státu na dostřel). After returning from her second trip to Syria, she has talked to Café Babel about the latest developments in the country.

You have returned from your second trip to Syria. What has changed there since August-September when you were there for the first time? What is the situation there like now?

The economic situation is certainly worse now. Prices are rising. There are shortages of sugar. There are queues not only for sugar but also for gas needed for gas bottles. Electricity is available just a few hours a day – if at all. Turkey has completely closed the border with the Rojava region in the northern Syria, which is controlled by the Kurds. There is a high 800-kilometre fence there and embrasures every 400 metres. There is not a day when somebody would not be shot there.

Syria is now the biggest source of refugees heading to Europe. Some people’s reaction to their decision to leave is: why are they coming? Why don’t they fight? You spent some time with troops who fight against the so-called Islamic State, or Daesh. So, what kind of people flee from Syria and what kind of people stay and fight?

Let’s be frank – not everyone is capable of carrying a weapon and fighting. People who leave are mostly the educated ones, the middle and higher classes. And people with children. They want education for them and now it’s impossible to get in Syria. In the whole of Syria, only about a half of schools are in operation. Many are shot to pieces, many house refugees.

The first condition for leaving is to have money. Just crossing the border to Turkey illegally costs 800-1,000 US dollars for an adult person. The whole journey to Europe costs 85,000 Czech crowns (approximately 3,100 EUR). The rate for two children is like for one adult. People have to get through a very dangerous stage of the journey when they cross the Turkish border. They must go at night. They must not take anything with them, so that they can run. Border guards are bribed by traffickers but when the guards change, they shoot at people. Another, no less dangerous part of the journey is crossing the sea from Turkey to Greece. People are very afraid. In the first wave, it was mostly men who were leaving. Now women and children follow them. A typical group that now leaves Syria consists of around ten women, two men and the rest are children.

The main reasons for leaving are fear, hopelessness, bad economic situation caused by the war and political reasons. Many people have also interpreted Ms. Merkel’s statement from the last year as an incentive, as an invitation that Germany wants them. Nobody was fleeing Syria before the war, so no matter what the reasons are, they were caused by the war.

People who have stayed in Syria have realised that they have to defend themselves on their own. For example, in Rojava every village or neighbourhood has its own home guard. It consists mostly of elderly men and women. Each school has its guard too. The Rojava government supplies them with weapons. Children from the age of 14 learn to shoot. Everyone has weapons at home. Quite often, every member of a household has a weapon. People even sleep with them because the Islamic State often attacks at night. It is also noticeable that people who had not been on the frontline before have joined the fight – mothers, elderly men and underage boys. Mortality is very high – not only in the battle but landmines left by the Islamic State kill a lot of people too. However, there is a dire shortage of people and equipment for mine clearance.

The city of Kobani is unique because 90 per cent of people from refugee camps in Turkey have returned home although 80 per cent of the city is destroyed; there is no electricity and no water supplies. In Kobani, emigration is considered failure.

The Syrians don’t flee only the Islamic State but many say that they left Syria because of the actions of President Bashar al-Assad. Who is considered to be more dangerous by people you have met and talked to?

The real political opposition to Assad is already in exile. Ordinary people now nostalgically recall that it was better under Assad’s regime. There was stability and security. Even people who were jailed and tortured by Assad’s regime say that everything was better than it is now. Of course, people flee from all places where there is fighting, no matter who is fighting there. So they flee the Assad army too. But they mostly run away from hopelessness.

The war in Syria has lasted in various forms for almost five years. What is the chance that it could end in the near future?

The war has lasted for five years and it is impossible to end because each warring faction has support from abroad – from Turkey, Iran, Russia, Saudi Arabia or the USA. This external support means that the warring factions cannot exhaust themselves. It does not matter anymore who fights on the ground in Syria. The more important thing is who supports them – and how. Syria has become a playground of great powers. Furthermore, just like any other war, this one is also first of all business. Why does everyone talk about the military defeat of IS but not about the need to stop financial flows to IS, about stopping its oil trade…?

Since the beginning of this year, the Islamic State has suffered relatively major territorial losses. Can it happen that it will disintegrate or is it still strong enough to hold its ground?

It is not as strong as it is presented. If there was enough will, it could already be defeated a long time ago. Kurdish militia pushed it beyond the Euphrates river. Now they would like to go all the way to Raqqah but they can’t. It depends on the approval of the coalition and Turkey thwarts it. Turkey and the Islamic State have a 600-kilometre border in the north of Syria. There is active trade going on there. Cheap oil is heading to Turkey and weapons, medicines, consumer goods and fighters are heading in the opposite direction. Turkey will not give up on this easily. However, there are reports that the morale of the IS fighters is not so strong anymore and there have been defections from its troops. Many IS leaders have been moving to Libya, which will be the next battlefield. The Islamic State now controls about a half of Syria but it’s mostly the desert. It would be quite easy to defeat it in Syria if the great powers wanted it. But the defeat of IS in Iraq is a different question. It controls Mosul with a million inhabitants. Because of a high number of civilians, nobody can bomb out the city. 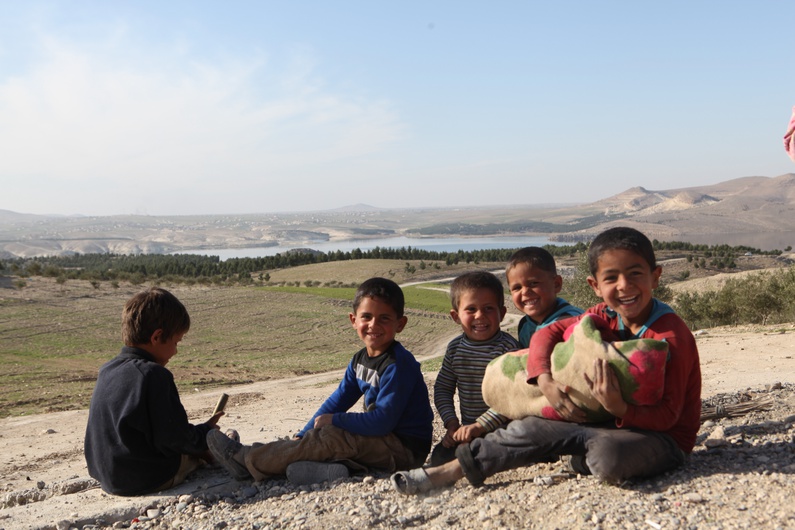 In one of the interviews, you mentioned the danger posed by Europeans who joined the ranks of the Islamic State. What attracts them to the nihilistic ideology of this movement?

They are mostly offspring of immigrants – young people who don’t feel Algerian, Moroccan etc. but they don’t feel French or Belgian either. And suddenly somebody comes and gives them identity: be at least a Muslim and become a part of the Islamic State. They also offer them a pay of 1,000-4,000 US dollars, a house and four wives plus sexual slaves. And they also tell them that if they die for the Islamic State, they will go to paradise where 72 virgins await them. Thus they give them also the reason to die. Who will give you something like this?

How can the European countries eliminate this danger?

Those who fight are not the biggest danger, but those who come back to Europe – either voluntarily or they are sent here. These are brainwashed, trained people who are capable of doing anything. Now they wait for instructions. They are ticking bombs. It is estimated that there are already up to 4,000 returnees in Europe. And Europe? The European countries are waking up very slowly. I think their response is very soft. It is crucial to change laws to respond to the current situation because these people are a real security threat. It became obvious after the Paris attacks – six out of eight terrorists were trained in Syria and Iraq. Intelligence services knew about them but the let them roam free.

A recent survey has shown that in the countries of the Visegrad Four (Poland, Hungary, the Czech Republic and Slovakia) the lowest proportion of people with negative attitudes towards refugees is in Hungary, which experienced their influx, while the highest proportion is in the Czech Republic and Slovakia where there are barely any refugees. How would you explain this phenomenon?

It has become a populist topic for many politicians and other people who play on people’s weaknesses, spread fear and if somebody feels fear, you can easily manipulate him or her. It is also an attractive topic for the media. It increases circulation and page views and income from adverts. The media don’t know what more alarming news they could find. They give space to lorry drivers who drive through France and turn them into experts on Islam. 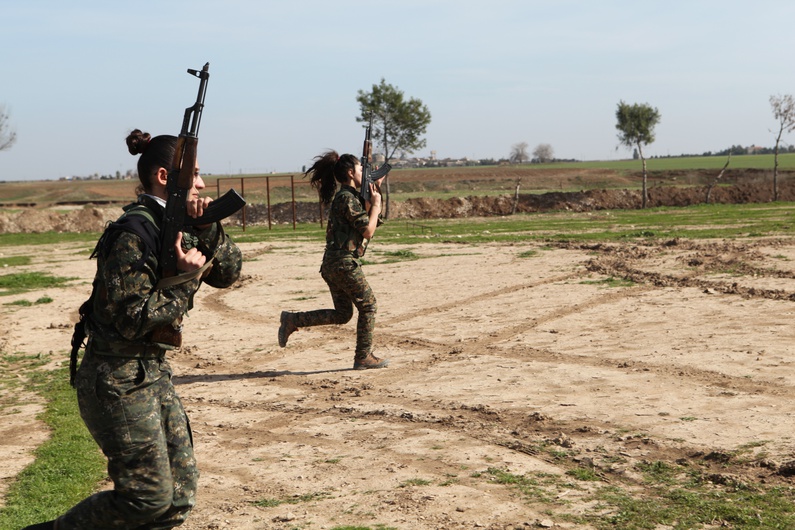 The debate on refugees is accompanied by the boom in hoaxes and distorted information spread by various conspiracy websites. Why do people believe such information? Is it just distrust towards the traditional media or the loss of ability critically to evaluate information sources?

Unfortunately, people lack critical thinking. They consume the news instead of asking why and by whom this article or title is served to us. Who owns this media outlet? If we look at Parlamentní listy (a Czech website) – how many people are interested in the fact that its owner is the king of gambling business, Senator Ivo Valenta, the owner of Synot (a gambling and betting company).

After your first visit to Syria you took part in a series of public lectures and debates. What were the most common misconceptions about refugees and Muslims that you have heard?

People have no idea that 40 million Muslims have lived in Europe for decades and in some places for centuries and until now nobody has been concerned by that. The biggest genocide in Europe since World War II was on Muslims during the war in the former Yugoslavia. Forty thousand refugees, mostly Muslims, crossed our territory when they were fleeing Yugoslavia – only about a thousand stayed here. Unfortunately, people think that a Muslim equals an Islamist. And that’s the root of the problems. And they still repeat that rubbish that the refugees are defectors and they should stay and fight. But who do you want to die for in Syria?

War reporting does not have a strong tradition in the former Czechoslovakia. How did you start reporting on armed conflicts directly from war zones?

I have wanted to do it since I was 17. My role model was Petra Procházková. I worked in Lidové noviny for two years but they never sent me to cover a war. Then I worked for Člověk v tísni (People in Need – a Czech NGO), including in the war zones. Now I have met likeminded women and we have an organisation called Femisphera. We choose ourselves where to go. Recently it has been mostly war. In our circumstances you cannot expect that some media outlet will send you to cover a war. You have to take care of everything. My life motto is: where there's a will there's a way…

Femisphera has launched a charity appeal SOS Kobani which raises money for reconstruction of the Kobanî city in northern Syria.