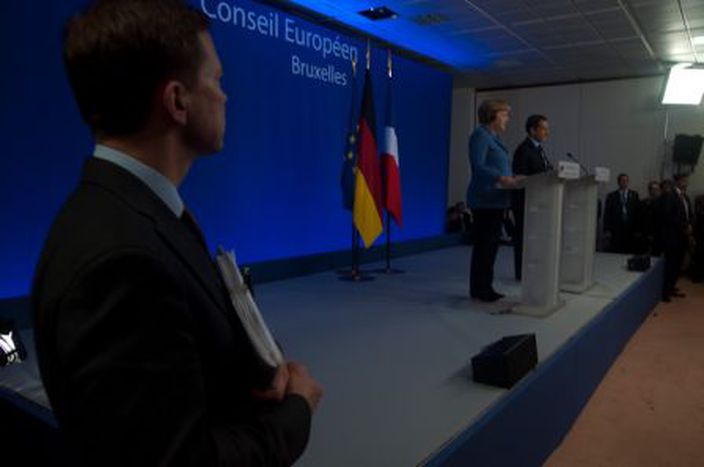 Waiting for Merkel, Sarkozy and Wednesday

By Lisa Kittel Photo: Nikolas Konstantin Waiting for more than an hour and a half in a very hot press room doesn't prepare you well for receiving good news. Nor did help when Green/ FEA MEP Rebecca Harms, waiting with the hordes of journalists packed into the room, played a video message with a sequence from the movie “The life of Brian” - the scene where the disciples can’t reach an agreement.

The gathered hoped it wouldn’t turn out to be the same at yesterday's summit.

Merkel and Sarkozy quickly clarified what had been discussed. Topics that "in the long run would also be important for the budget consolidation in the different countries and the ability of Europe to cope with crisis situations": for example youth unemployment and research. In the long run, yes.

Preparing for Wednesday and answering upcoming questions, the terms "contract changes" and words like "united" came up a lot. Although it’s the same old game, it seems important to show that after open disagreement and discussion, the European Union can act united, with France and Germany as constructive precursors. The new planned Eurozone government is one of the points Merkozy seems to agree with. This means more possibility for working groups on an Economical European government – more federalism, more control, more agreement based on detailed research and discussions.

Concerning specific measures, Sarkozy underlined that confidence cannot only be built through firewalls or through a "new" Greece, but everybody has to learn and to act.

So far so good.

But before all that, the main problems in the Eurozone need a quick solution. Will Greece default? If so, how high will the haircut be? If private investors also have to dispense with Greece dept, can a recapitalization, like the one proposed by Merkel and Sarkozy, be really implemented by the banking sector by resorting to investors on the free market? If not, the States and, as a third solution, the EFSF, should procure the money. And what will it happen with this facility?

Will there be an enlargement of the EFSF, in which way?

These questions remained open. And probably will for a bit longer, because, as Merkel said, “a dept crisis which was built over decades will not be resolved on one day”. Most of all, we are in a situation that does not count on any historical example. Until now a common currency has never faced such a situation . If you prefer, you can put it this way: as no one can predict anything, we’re a big European experiment.

"The Euro is our prosperity" said Merkel and Sarkozy, who mentioned that he would like the ECB to support the Eurozone countries, also added: "We agree on the point that the European note bank has to be independent."

When both Merkel and Sarkozy were asked if they trust Berlusconi and if they think that for Italy everything will be resolved, Merkel answered (after few seconds of silence and a smile): "Italy is an big and important in the Euro space. Berlusconi is of course our contact person and we count on him."

On the other hand, in his answer to a question critising the euro crisis management, Sarkozy took a defensive position: "It’s easier to comment than to act, right? Ireland is a country that is finding its his way out of the crisis. Portugal is going in the right direction, and it was Europe who proposed the G-20. So rather asked where we would be today if we wouldn’t have taken the initiative!"

And for the rest, patience! "No speculations" as Merkel says. Because we all know that they stood up at the beginning of the first crisis in 2008, right?