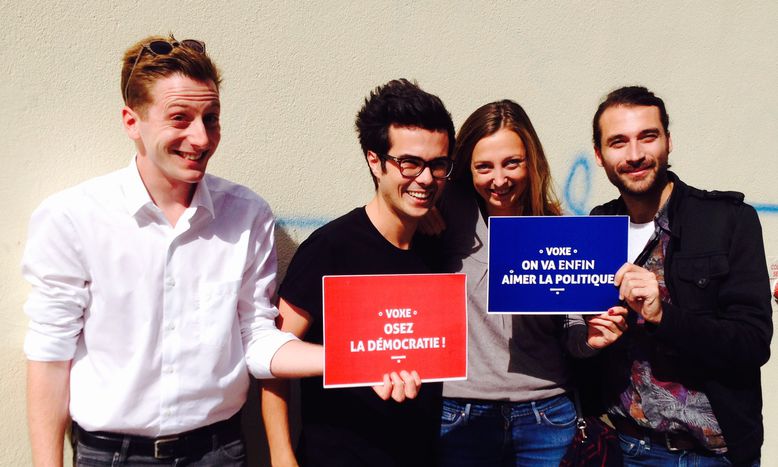 Voxe: The new digital platform that wants to save politics

A finalist in this year's Google Impact Challenge, Voxe has already gathered 3 million users across the world with its civic initiative platform. Created with a "Wikipedia of politics" in mind, the project aims to shift the power of "traditional" decision making towards citizens. An interview with Léonore, the co-founder of the initiative.

Léonore de Roquefeuil: Voxe is a civic initiative that facilitates access to political information, so that it's easier for citizens to be involved in politics. Basically, we try to make everything a little clearer. We have nine people in our main office in Paris working to achieve this, as well as a team of volunteers from about sixty communities around the world.

cafébabel: What form does this initiative take?

Léonore de Roquefeuil: In 2012, we created a platform designed to compare, in an unbiased and international way, political manifestos that are relevant during elections. We've used this platform across 12 countries and we have already convinced 3 million people to use it. We're open-source, and also crowdsourced, in much the same way as an "election Wikipedia". In other words, anyone - including the candidates themselves - can contribute edits or add new content.

cafébabel: In that case, how do you ensure that the information provided is accurate?

Léonore de Roquefeuil: As soon as we receive a suggestion, we check the source. When it's a new policy, we only post those that appear in the parties' official manifestos.

cafébabel: What's the reason for this?

Léonore de Roquefeuil: When we created VOXE, we thought that everyone would propose information from the same sources. Actually, when you base things on manifestos and policy areas, you realise that there is a lot of division between peoples interpretations. Even basic ideas are subject to debate. We also add data from other public sources to improve comprehension. Let's say that a candidate is in favor of TTIP; the cititzen may well need more information about what this is. Consequently, our team of volunteers looks for information on sites like vie-publique.fr or regardscitoyens.org to offer additional information. We try to be as unbiased as possible. 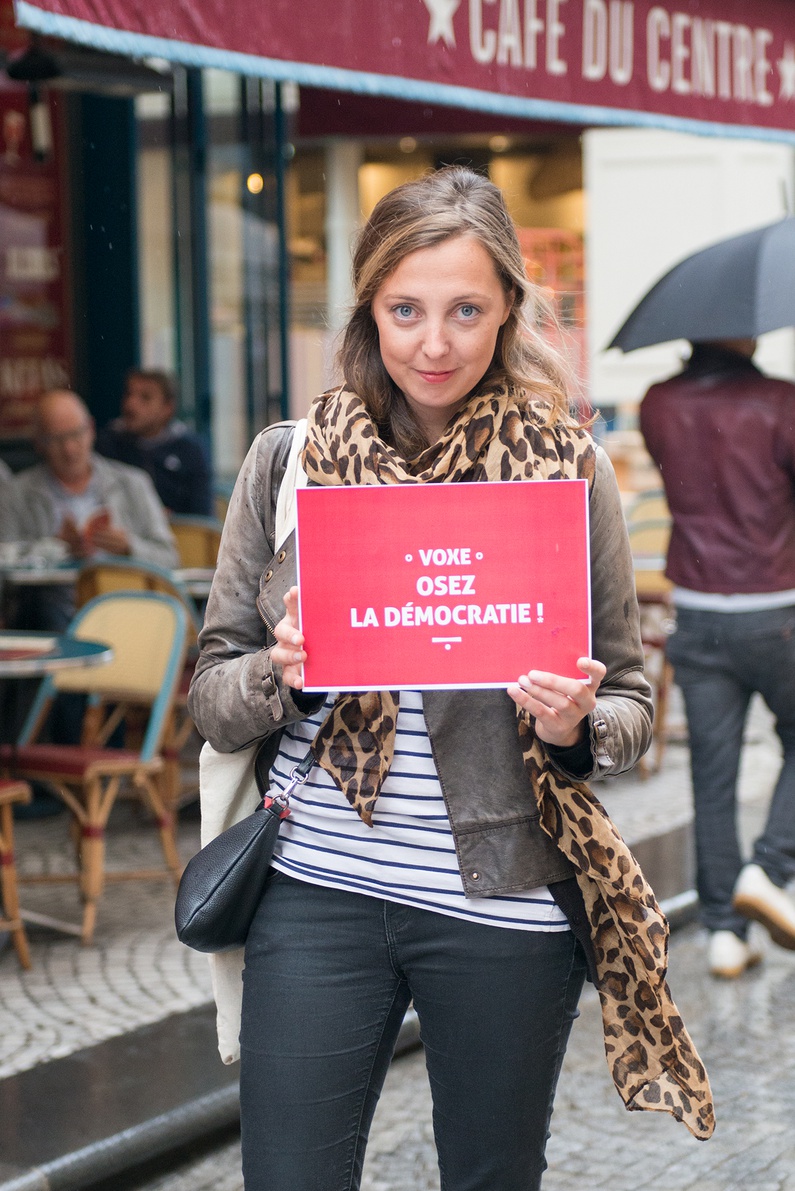 cafébabel: Was Voxe founded with the view that there was a democratic deficit?

Léonore de Roquefeuil: Yes and no. We wanted, most of all, to bridge the gap between elected representatives and citizens and reestablish a certain confidence in politics. Today, citizens don't get involved. Not by voting, since there are lower and lower turnouts, nor by political parties, since they don't seem to interest people anymore. On the one hand, citizens don't feel able to impact society. On the other hand, the information transmitted to citizens is not being understood. We act on these two problems by making information clearer during elections. Also we go further, by telling ourselves that improving democracy isn't simply about changing the way people vote. If we want to ameliorate democracy, we need to work on the day-to-day participation of citizens. Since the beginning of the year we've been working on an application that will help citizens to be more involved, and have actual "missions" to complete to improve their political involvement...

Léonore de Roquefeuil: Let's pretend I'm the owner of a driving school. I sign up with the application, in an area that concerns my work (such as driver's license reforms). As soon as there is something new, I receive an alert with an accessible summary of the law, an infographic with relevant statistics for my area, a map plotting the principal authority figures that are in charge of the issue, a section which tells me whether my elected official is in favor of the project... Once I am informed, the application will ask me to position myself as "for", "against" or "I don't mind". According to their response, we suggest a series of actions that people can get involved in, from protests to petitions.

cafébabel: With these methods, are you afraid that people will only take action as lobbyists?

Léonore de Roquefeuil: The goal would be to get rid of the barriers between citizens and interest groups, constructing groups of citizens lobbying parliament which go beyond the usual regulated professions. That's the advantage of a platform that proposes several different options for participation, and where citizens are informed about areas of activity outside of their usual interests. They will be able to take action regarding a cause that doesn't directly affect them. In an informed way, a medical intern will be able to share opinions and find common ground with the driving school instructor, for example.

cafébabel: In your manifesto, you say that we are all, unknowingly, politicians. What do you mean by this?

Léonore de Roquefeuil: This references the idea behind the campaign led by Pierre Rabhi and the artist JR is 2012, "Tous candidats", for which they created anonymous, black-and-white portraits of citizens. The goal was to show that in an election, anyone can be a candidate. Today, we spend our time deliberately avoiding learning about certain political processes, telling ourselves that there are people who will take care of these public issues for us. As a result, we don't believe in the legitimacy of our own opinions. We don't go to vote with our heads held high. But in reality, everything is political, and it might just start with a morning conversation with the neighbour. If everything is political, then we are all politicians.

cafébabel: You believe in the power of technology to give citizens access to less biased information, and to introduce young people into politics, fighting abstention in the process... In what ways does technology achieve what traditional methods cannot?

Léonore de Roquefeuil: The traditional methods used by the administration don't correspond to citizens' way of thinking. Today, we have governments that speak the same way they did in the 19th century, using a lawyer's vocabulary. Technology seems to only be used by governments in a top-down fashion, they just throw information at us. True, there have been steps made in the right direction, but they remain marginal. We saw during the Arab Spring, for example, that millions of people could be called upon through technology. The power of technology is immense. The problem is that it doesn't yet allow us to propose viable alternatives to the politics rejected by many social movements. 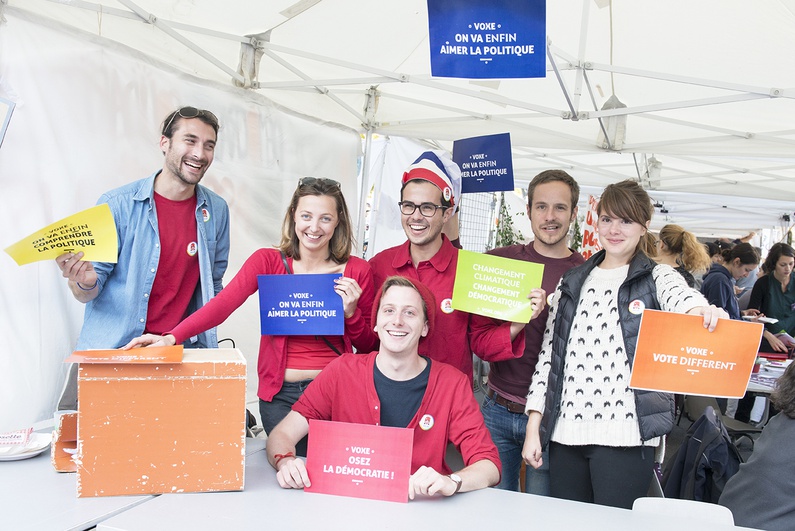 Léonore de Roquefeuil: No. Definitely not.

cafébabel: Were you inspired by any similar model in Europe?

Léonore de Roquefeuil: Not really, even if we are not the only comparing service in the world. However, we are the only platform that functions through a crowdsourcing approach and the only one to be open-source. Building on this, we know that we need to make efforts with our design. We're working with volunteer developers who love our idea.