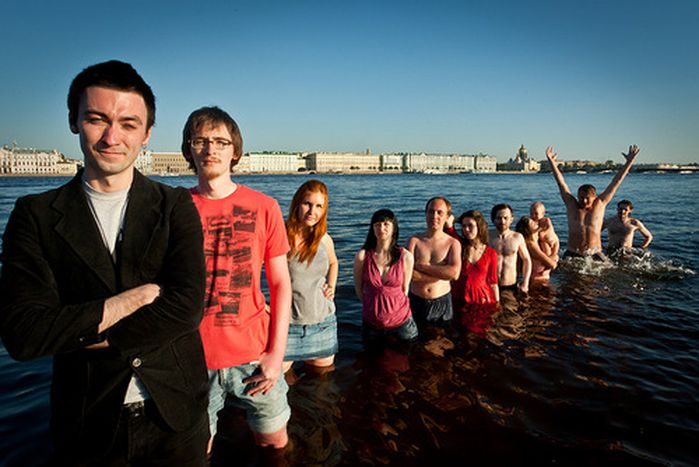 Voina: 'As a Russian activist, I'm not sure that I will live long'

With organisers saying that almost 100, 000 people protested in Russia's biggest anti-governmental rally on 10 December - accusing the kremlin of 'fraud' in 4 December parliamentary elections - we hear from the Moscow-based self-styled 'street art gang' in part two of an exclusive interview, where they describe their role in this Russia

cafebabel.com: What do you think about the reactions in the media to your actions? What’s the biggest cliché you’ve heard about the group?

Koza (the group'scoordinator Natalia Sokol): There's a great number of myths about Voina circulating in the media. Any given publication is 30% gossip and hearsay, even though we are always available and open to communication with journalists. The thing is, there is no honest, independent journalism in Russia. It has been eradicated. On the other hand, the misinformation in the media sometimes works in our favour. It helps to have a cloud of lies surrounding you when the state is attempting criminal persecution against you.

Leo (the group's president, Leonid Nikolaev): The biggest cliche is that we are simply spoiled ‘golden youth’, rich party kids whose powerful parents keep us out of trouble. In truth, we a leading a deeply underground existence, living the honest lives of Russian paupers.

cafebabel.com: What do you think or Russian politics today? And of Russian culture?

Vor (the group's ideologist Oleg Vorotnikov): There is no politics in Russia today. The so-called parliamentary opposition as a whole is entirely tame and controlled. The communists have long turned into prostitutes who whore themselves out to the regime. The non-parliamentary street opposition has been wiped from the streets, crushed, its activists thrown behind bars or physically exterminated by riot police and by the infamous police department ‘center E’, the anti-extremism department, which has assumed the role of secret police tasked with suppressing political dissent. The list of activists and journalists in Russia who have been killed, maimed or imprisoned is ever growing.

Then there are the so-called liberals, a bourgeois crowd, self-proclaimed as part of the opposition. All they do is hang out and organise festivals in their own honour, all sanctioned by the president's administration. They enjoy themselves at country resorts where they hold their conferences, and they call it protest activity. They're nothing more than trendy kids, clutching their iPhones as they discuss the revolution on twitter. They aren’t interesting to anyone but themselves yet for the regime they are very convenient. The underground protest movement is now on the rise. It is made up of activists who no longer see any promise in peaceful protest methods. They are extremely secretive and have serious ambitions. They are forming underground squads and groups that would oppose the regime by force. Peaceful protest has exhausted itself.

Leo: In the years of Putin's rule (2000 - 2008 - ed), the regime has discredited peaceful protests through violent crackdowns on harmless rallies, and through beatings and long prison sentences for peaceful activists. On the other hand, the adherents of peaceful protest have been discrediting themselves for a long time. They have failed to find a way to make their protest effective. There is only one way for true opposition in today's Russia: WAR, or VOINA.

cafebabel.com: Do you also see positive trends in Russia today?

Vor: Yes. The things germinating in the underground right now are unknown activists who are the only people we work with. All of our thoughts and deeds belong to Russia. However, I'm not at all sure that Russia has a future. Only in the best case scenario would it be able to continue its existence as a country without the need for human sacrifice. That is the most optimistic projection.

cafebabel.com: What artists do you admire?

Leo: There's no sense talking about artists. Our art tastes are irrelevant. Art did affect us when we were students, it helped shape us but it isn't central to our lives anymore.

cafebabel.com: Where do you see yourselves in ten years time?

Vor: I'm not sure that I will live that long. The path of a Russian activist is tragic. Once you're engaged in actions, you don't belong to this world anymore. You belong to actionism.

Leo: I am confident that the regime will choke on us. We're inedible. We're poisonous fruit.

Koza: In October the criminal investigation against Voina was closed. Suddenly the public prosecutor's office decides to reopen it. There’s an international arrest warrant out against Vor. I'm wanted by the police country-wide. On 18 October, Kasper and I were abducted from the street by Center E operatives The system has been working towards taking away our son since November 2010. We’re seeing more and more charges being brought against Voina members. Our activists in St. Petersburg are being detained on a regular basis, their homes invaded by cops who destroy their personal possessions in faux searches. Just a few days ago, two plain-clothes cops (most likely Center E agents) broke into Leo's home in Moscow. Leo was clear of any criminal charges at the time. The majority of our members have already abandoned their homes and resorted to an underground existence.

Vor: Ten years does not mean anything to us. We belong to history.

Read part one of cafebabel.com's exclusive interview with Voina, 'Russian art collective Voina: ‘Zhlobs are in power in today’s Russia’