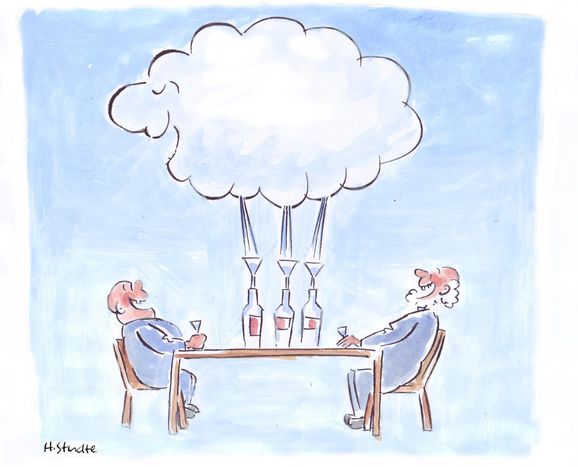 Vodka off a duck's back

Linguistic play of the week: how vodka, malt and whiskey become the French 'water of life' or Italian 'lukewarm water'

Two Hs, an O and a thousand mysteries surround the clear liquid that Aristotle chose as the fourth element after fire, earth and air. Water is transience, the source of life, healing and clarity – and beyond its spiritual aspect, also lends its name to several other kinds of spirit.

For example, water is responsible for the noteworthy creation of a good clear vodka – for this vegetable or potato spirit literally means ‘little water’ (from the Russian: voda, Polish: woda). If a Pole and a German have a vodka drinking contest, the German ‘won’t be able to pass the water’ to the Pole (in German, jdm. das Wasser nicht reichen können

Perhaps to that effect they should have rather chosen a good single malt – but whiskey also literally has water at its heart (in Scottish Gaelic, ‘water’ is uisge and in Irish, uisce). They should have been washed with all waters (mit allen Wassern gewaschen sein

– ‘to know every trick in the book’), a German allusion to experienced sailors. The Spaniard cries agua, agua

(‘water, water!’), to tell his mates it would be best to decamp!

But the British remain steady: a couple of whiskeys is just water off a duck’s back

, mere child’s play. The French are optimistic too. A good eau de vie

(‘water of life’) should, according to alchemists, guarantee a long life anyway. A little later they’ll be pouring oil on troubled waters however, by mixing water with wine (‘mettre de l’eau dans son vin’

– ‘nothing new’), and will join in with the Goethe-quoting German in the words of the bedraggled Sorcerer’s Apprentice: ‘Master, the need is great! The spirits I summoned, I cannot escape.’ But after a night on the tiles with one or another of those little waters only one thing will help: a proper glass of H2O.