Azerbaijan and Armenia should definitely fight, but not with each other. Instead, they should fight the poverty.

It is just another day in Oslo and the first thing I do is to check my Facebook account in my bed - like many of us. Dear Facebook tells me the vegetarian festival is coming, Adele’s concert is in May, Oslo Writers’ League is having its monthly gathering, etc. Lots of positiveness, lots of hope is around; but wait for a second! One of my close friends tagged me at Khojaly Massacre Memorial, and another one invites for upcoming Armenian Genocide Anniversary. Especially after the recent assaults in Karabakh, what am I supposed to do as a citizen of humanity?

No matter what, I don’t want to be part of the mutual hate; I want to carry neither the burden of my grandfather’s sorrow nor mistake. These are my red lines.

On the other hand, I believe Azerbaijan and Armenia should definitely fight, but not with each other. Instead, they should fight the poverty. And I do know what they will say about me. If I don’t join the Khojaly Massacre event, I will be called a traitor. If I don’t show up with Armenians, some will say the cold words: “What would you expect? He is a Turk.” In short, this is the price of being a radical humanist. Remembering the death did not bring us any peace. Revengeful traditions brought us drowning Syrian children at the shores of Aegean Sea.

Instead of thinking about the revenge, I will use my time to discover the beauty brought to us by Armenians such as Architect Sinan.

Sinan was born as the son of a modest brick builder. Because of the Ottoman politics at that time, he was taken from his Orthodox Christian family to join the military school which lifted him from the bottom of the society to the top of the Empire as many other contemporary examples. Architect Sinan designed hundreds of edifices including fountains, bridges, mosques, hospitals and palaces which are even today more stable than most of the modern buildings. Architect Sinan is Leonardo da Vinci of Ottoman Empire. Most of his works spread to Balkans and Turkey. His genius mind not only built extraordinary work, but also raised many apprentices who designed Stari Most in Bosnia and Taj Mahal in India.

Out of doubt, if you ask any Turkish citizen who is the greatest architect of our history, he or she will tell Sinan’s name and we all know that he is Armenian origin – luckily the dark propaganda did not touch this part of the history, yet.

To fulfill the respect for Architect Sinan, his image was used for 10,000 Turkish Liras banknote in 80’s.

We do not have to travel so much in time to remember the importance of Armenians in Turkish history. The greatest mother figure of Turkish cinema is Adile Naşit who is also Armenian origin. Adile Naşit acted in hundreds of feature films and theatre plays. She is apparently one of the most influential personalities of Turkish cinema and theatre with her cheerful laughter. However, Adile Naşit’s personal life was not as cheerful as her roles in the fiction. Turkish-Armenian actress’ son Ahmet died at age 16 because of some disease. According to many, this sorrow pushed her to spread her affection to the children of whole country. Adile Naşit sought the remedy in the hearts of the children.

In 1980, actress Naşit joint a TV program for children. Her storyteller performance has become a phenomenon among the children. 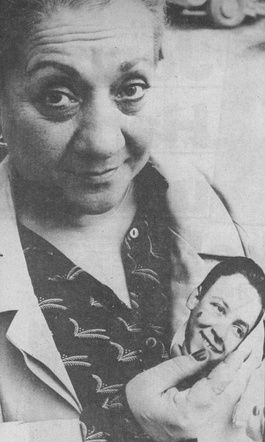 Turkish-Armenian Actress Adile Naşit is holding the picture of her son Ahmet who died at age 16.

These people and many others are the heroes of Armenian-Turkish unity. Whenever I fall on my knees, remembering their attitude and achievements hold my arms and lift me up. Wars, massacres and rapes are not our common history. Who can tell one war where the innocent was not massacred? To prove how much we are right on something, we are either killing or remembering the dead ones. Life cannot be negotiated by death. Let us not celebrate the death, celebrate life!