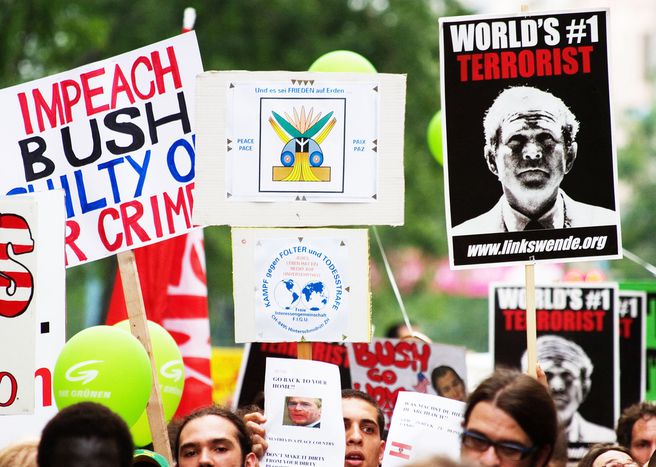 In the end, the outgoing US chief wasn’t only at war with Iraq, but over climate change, the financial crisis and the English language. A look back at his biggest bloopers. The next president is announced on 4 November

The 43rd president is known for his name gaffes. Spanish prime minister Jose Maria Aznar becomes ‘Mr. Anzar’ in Bush's first trip in office to Europe in June 2001, whilst Kosovars became ‘Kosovarians’. Jacob Weisberg and Bryan Curtis, journalists from the political magazine Slate, enjoy collecting the Bushisms; type that term into Youtube and you come up with more than 500 results. What a big bushism the last eight years have been

Bush says opportunities are bigger than the sky above Texas, after narrowly winning the presidential elections against Al Gore in 2000. But just one year later, the White House idyll is abruptly disturbed: suicide hijackers crash two airliners into the World Trade Center in New York. The attack is organised by Al Qaeda, who co-ordinate another simultaneous but less fatal attack on the Pentagon. The images become instantly recognisable across the world. More than 3, 000 people lose their lives on 11 September 2001. It is a time of emergency, a time when the US need a strong president

The axis of evil

And then they got Bush. The republican quickly organises himself against what he calls the ‘axis of evil’ (ran, Iraq and North Korea) in January 2002

One month after America’s terrorist attacks, the US begins an offensive against the Taliban in Afghanistan. The Iraq war, which begins in 2003, adds to the ‘fight against terror’ policy and ends up dividing the world’s nations. George Bush’s popularity plummets, worsened by the images of American soldiers torturing Iraqi prisoners at Guantanamo and his never-ending public pledges

In 2004, anti-Bush lyrics are released in a song by the Beastie Boys (‘George W.’s got nothing on me / we’ve got to take the power from him’), from their fifth studio album To the 5 Boroughs (with the twin towers on the cover). Bush begins his second mandate, winning 51% of the votes against diplomat’s son John Kerry

‘Washington will use all its strength to divide EU members,’ writes American philosopher Richard Rorty in 2003 in a call to the the European continent. He is right: with regards to the stance on the Iraq war, the countries are clearly divided. Disagreements also run on the installation of a US anti-missile radar station in the Czech Republic and Poland. Above all it is Washington’s negative view on climate change which garners it the most opposition from the Old Continent, especially coming from the capital of a country which is the worst polluter of the planet. Hurricane Katrina hits the Gulf Coast in August 2005, bringing George Bush back to the real world

His attitude is often not well viewed from Europe. When Queen Elizabeth visits the US in May 2007, Bush implies the 81-year old is 200 years old ('born in 177 ... 1976'). At the 2007 G8 summit in Heiligendamm, the images are of the ex-alcoholic drinking beer. At the same summit in St. Petersburg the year before, he is caught on camera awkwardly massaging the stiff German chancellor Angela Merkel

‘The problem with the French is that they don’t know the meaning of the word entrepreneur,’ Bush allegedly says to former British prime minister Tony Blair. But since summer 2007, the financial crisis has been causing the world problems. ‘Black Monday’ hits the markets on 15 September, when Wall Street first goes down. ‘Like a capital in times of war,’ the New York Times reports on the atmosphere in Washington. George W. Bush is certainly absent, seemingly preferring to rest on the good old laissez faire, almost as if he were already resigned. Or is he preparing another little coup? In this case, perhaps we misunderestimate the 43rd president of the United States