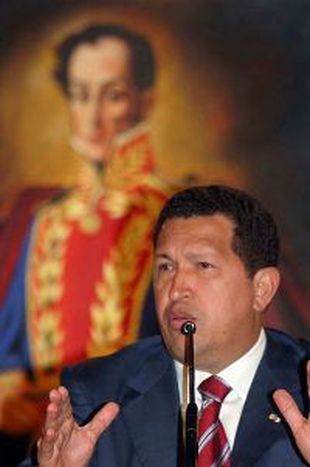 ‘This man is my brother and I hope, my fighting partner’

Iran’s president, Mahmoud Ahmadinejad was referring to the 52 year old Venezuelan president when he made this bold statement last summer. After an unsuccessful coup d'état in 1992, and since becoming president in 1999, Hugo Chávez's 'Movimiento V República' (5th Republic Movement), has re-established Venezuela. His new constitution and political style, using free elections, has triggered a conflicting array of opinions.

Chávez isn’t short of friends who have had dubious democratic careers. Figures such as the president of Belarus, Alexander Lukashenko, or Cuban president Fidel Castro appear on this list. The coming December 3 elections will see him face the opposition presidential candidate, social democrat Manuel Rosales. He has since stated that, ‘if I'm killed, everyone will know that it was Chávez’.

Another win, another 15 years

Chávez's government is inspired by those of the famous ‘Liberator’ Simón Bolívar. Venezuelan parliament is made up of parties similar to those of the ‘Bolivarian Revolution’. In an attempt to delegitimatise Chávez in previous elections, the opposition has withdrawn.

José Joaquín Urías, legal secretary at the Constitutional Court of Spain, and who acted as consultant to the Chavez government in 2001, charges Chávez. ‘Selfishly, this man would like to see the opposition win more power within parliament, rather than withdraw as a question of international image.’ Raúl Bocanegra, a Spanish journalist who has just returned from reporting in Venezuela on their authority's invitation, adds to this. Chávez’s supporters, known as ‘chavistas’, ‘want the opposition to get into parliament for practicality – the last few places of the electoral register are made up of people who know very little about politics.’ Given that Chávez’s parties win all of the seats, the quality of parliamentary debate is unsurprisingly poor.

If he wins the elections once again, Chávez will have been in power for 15 years. However it is unconfirmed that he will return for another term of office. Does he not want to keep going? ‘If this is the case, he’s keeping it to himself,’ explains Urías. ‘Chávez has already stated on other occasions that his plans will need a lot of time. He will not be the only one who has stayed in government for a long time.’ (Spanish ex-Prime Minister, Felipe González, and France’s François Mitterand, managed the feat for 14 years whilst Germany’s ex-chancellor, Helmut Kohl, went 'two up' with a record 16.) Urias concludes, ‘the Chavez system is highly individual and no doubt he would be very difficult to replace.’

This same constitution predicts the possibility of a consultative referendum halfway through the term against all elected public offices. This unstable democratic measure was used by the opposition against Chávez in 2004, but was unsuccessful. ‘Since then,’ continues Urías, ‘Chávez has become less and less populist and more of a progressionist. The opposition went to pieces, and at last the president was able to start taking charge.’

‘His infrastructure plan is huge”, states Sergio Pascual, a 29 year old Spanish engineer who was at the campaign. ‘He had just opened a bridge over the Orinoco River, twice the length of the Caracas and Maracaibo metros.’ He stresses that the ‘health centres here are as well equipped as the Spanish. However,’ he clarifies, ‘there is a lot of street crime and a high degree of corruption.’

In this respect, the private television companies and large newspapers of the country, such as El Universal and El Nacional, do not allow government actions to be broadcast.

But for Chávez, hours are dedicated weekly on the public television channels to government initiatives, which are shown in-between anti-imperialist speeches. ‘He uses colloquial language so that the humble people can identify with him,’ states Carlos Armas, a 25 year old dentistry student from Caracas. ‘He is more of a populist than anyone.’ According to this young man, who considers himself to be apolitical, ‘the government doesn’t act in a democratic way. The chavista Luís Tascón produced a list of names of the people who signed the consultative referendum against Chávez in 2004, who are now rejected in state-owned companies.’ With his French partner Claire Olmer beside him, he continues: ‘if he wins again, we’re leaving the country.’

‘What might seem stranger to a European,’ comments Raúl Bocanegra, ‘is Chávez's military language.’ He often speaks of ‘Venezuela on the move!’, of ‘Conspiracy against the elections,’ of ‘Stand up against poverty’. In a country in which 51% of the population live in the informal economy, 90% of loans are short-term due to the lack of confidence in the economy. Hugo Chávez didn’t know any other way of breathing new hope into the nation, other than returning to his military past - even at the risk of dividing society.

The Venezuelan president doesn’t only make use of speeches. In order to transform the country, he takes unused land and industries and gives them to farmers and labourers who will get them running again, arguing that ‘private property must be subordinate to public interest.’ It’s something that appears to be supported by the majority of European constitutions.

Finally, Simón Bolívar's influence on Chavez must be highlighted. In his day, he dreamed of unifying Latin America into one country. European economic integration was the example. It was Chávez himself who introduced ‘MERCOSUR’, South America's leading trading bloc, to the country in 2006. Along with Cuba and Bolivia, (Bolivarian Alternative for the Americas), it’s a cooperation zone which, in exchange for sending 92,000 barrels of oil to Cuba per day, has already given 30,000 Cuban specialists the right to work in Venezuela in the field of health, education and sport.

What more is Cuba lacking…nothing. Except perhaps a call for free elections.