Unpleasant side of spending time on the beach 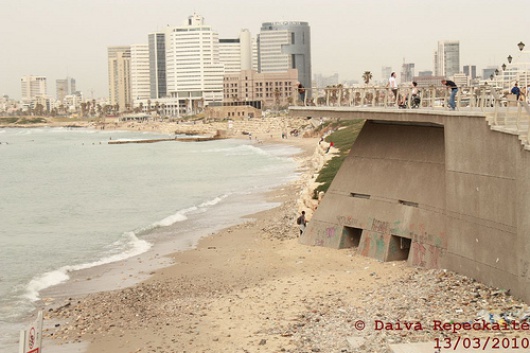 Tel Aviv has a very long coastline and has many diverse beaches for all tastes. Now that I live in South Tel Aviv, I go to the southernmost one. Something I noticed yesterday exposed the fact that not all beaches are treated and serviced equally.

The coastline of Tel Aviv is crowded with hotels, which are nearly crawling into the sea.Tourists stay at them and enjoy the beaches in all seasons. Therefore there are several cafes right next to the beach. Most exits from beaches are equipped with water taps to wash one's feet, and in most beaches I've visited you can find clean bathrooms and changing rooms. Those are on the beach, so I doubt if the hotels take care of them.However, as it suddenly became warm enough for my Northern European body to chill in the waves of the Meditteranean, I went to my usual Southern beach prepared to take a swim. It's the last sandbeach before the embankment leading to Yafo starts. Yafo is a suburb (to which Tel Aviv was once a suburb) still predominantly inhabited by Arabs (but Russians and students settle there in increasing numbers, since it's cheaper).After the swim I spent some more time on the beach, but as wind grew stronger, staying in a wet swimsuit became far from pleasant. So I set out to look for a changing room, which, as I noticed only now, was nowhere in sight. There were many Arab families on the beach, including women who wear long clothes and headscarves and usually go to the sea in full clothing. Where do they change afterwards? Walking around and asking someone didn't help. Eventually I asked a security guard at the closest cafe: where is the closest toilet? The guard, who is probably not allowed to let people into the cafe just for that purpose, responded, "straight, straight, and then right, all the way to the gas station". I saw the yellow gas station in a distance. "Nothing closer?" Apparently not. With a dress over the wet swimsuit, I tried not to contemplate the health risks that may befall those who stay in the wind in wet swimsuit too long, and proceeded to the gas station. There were two bathrooms, one for men, open, and one for women, locked and with a broken handle. Two Arab girls waited for the women's room to open, but after some time decided that it's probably locked from outside, and shied away from entering the men's room, so they had to go back. After some hesitation, I used the rather smelly men's room to change clothes and headed back, since I had planned to go to Yafo anyway. The question remained unanswered: where do others change? Especially the Arabs (the majority of people using this beach), who swim with their clothes? Thinking about that, I passed a big nice park where Arab families were having BBQ. If they went swimming before, they must have changed !

Heading back, I got the answer. They change behind one small building of unknown purpose, holding towels to protect each other from strangers' looks. Doesn't sound all too comfortable and user-friendly for the beach, does it?Now, it's not anything specific to Tel Aviv. In many places people are compelled to resort to commercial places as they use non-commercial beaches. That is, going to a cafe and ordering something small is always a way out, which I don't find fair. Sure, it can be much worse in Lithuania. Public toilets are often not half as clean as in the touristic beaches of Tel Aviv, and can be even harder to find. However, most beaches have small wooden cabins just for changing, which don't have to be mixed with toilets and hence their upkeep is much cheaper. When those are far away or queues are too long, many of us have developed 'safe' ways to change clothes under a beach towel or a loose summer dress, which I could have done in Tel Aviv too, but in the company of these fully covered people going to the sea with their clothes it seemed somehow culturally insensitive :) Anyway, to explain my argument, I'm simply surprised at this difference between touristic beaches of the North and the Centre, vis-a-vis the smaller Southern beach for the locals. I don't think it would be all that difficult to build one more public toilet close to the beach, which would make a tremendous difference for the locals, especially those most sensitive about others seeing their bodies. The gas station is not on the beach, it's on a big road, which makes walking there in a swimsuit impossible, and for those who need to put trousers and not a loose dress on a wet swimsuit it's much worse. Therefore the cafe must be profiting from such desperate swimmers...