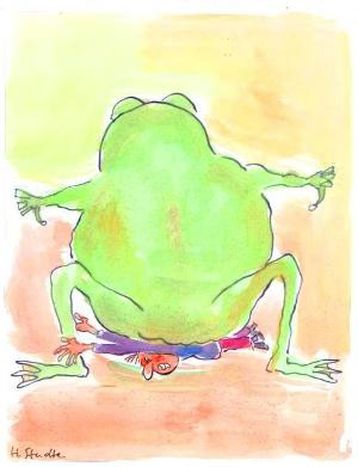 Under the frog’s bum

Despite speaking almost perfect English after having lived in the UK for 30 years, my mum confused me one day by uttering, “That’s really under the frog’s bum”. I inferred from the context of our conversation that she must mean this to be a bad thing - after all, it doesn’t sound like too pleasant a place to be. It was in fact a direct translation of the Hungarian saying a béka feneke alatt, meaning ‘in a very bad way’, often financially. There is an equally unpleasant idiom in English, referring to frogs: ‘to have a frog in your throat’, meaning to be temporarily hoarse. Then there is the Spanish por un pelito de rana for ‘it was a close shave’, literally ‘by a little hair of the frog’. Poor frogs, they do get a bad press. I hope for their sake there are sayings involving them with a bit more of a positive connotation.