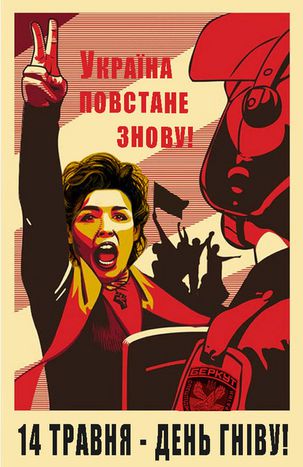 Ukraine, Belarus, Egypt...free the online activist in you

Ukraine’s ‘Day of Wrath’ against its president on 14 May has been organised online. Belarus’ internet is the only escape from regime propaganda. The Arab world reported its transitions online. Amidst these examples, Peter Ludlow, cyber rights activist and philosophy professor at Northwestern University in Illinois, emphasies that politics can be influenced in bottom-up solutions. Interview

Ukrainians are against the 'illegal' excesses of the power of their president Viktor Yanukovych, who cancelled constitutional changes in 2004, as well as several recent reforms which were not favourable to vulnerable social groups. 14 May sees the ‘Day of Wrath’ celebrated across Ukraine, as organised by the Joint/ Common Thing ('Спільна справа') movement. Groups have been created on two popular social network sites, Vkontakte and facebook. In neighbouring Belarus, whose regime is severe towards opposition protests, internet is the only media where you can access alternative information to official state propaganda. However, a large part of regime supporters (mostly living in countryside and elderly people) are not active internet users, so it is difficult to predict similar scenarios.

Internet more than other media offers ways to bypass censorship of any regime. Participation and sharing encourages people and breaks the fear. Even when phone lines and the internet were cut in Egypt in January, people in Tahrir square were writing messages as facebook statuses, making it an offline way of thinking. Citizen journalists become online activists whilst traditional media relies on new media support. For example, Al Jazeera started to use viewer generated videos during revolutions when there was no possibility of getting information in other ways. Interview with Peter Ludlow on transparency and new media ecology.

Peter Ludlow: People aren’t particularly transparent on facebook. Many people are careful to curate their images. Some people are not doing it wisely (not thinking about potential employers) but they are being selective about what they reveal. They are just revealing the wrong things to the wrong people.

cafebabel.com: Can transparency be dangerous on political (diplomatic) level?

Peter Ludlow: It’s not particularly dangerous, although a case could be made that it would be difficult to conduct diplomacy in a transparent environment. For example, someone could argue that without secrecy the Cuban missile crisis would have led to nuclear war. Opacity was needed in the negotiations so that the US could offer to withdraw weapons from Turkey in exchange for Russia removing warheads from Cuba.

cafebabel.com: Can that be considered public space nowadays?

Peter Ludlow: It is having a large effect already – the revolution in Tunisia was fuelled in part by revelations from WikiLeaks, for example. I expect incidents like this to be more frequent in the future.

cafebabel.com: Should journalists or bloggers be involved in online activism?

Peter Ludlow: We should all be. Objectivity doesn’t mean being politically inert - which is a 'very' political stance, by the way – it says you acquiesce to the status quo. No one is objective, and no reporting is truly balanced. People should be transparent about their political beliefs and then do their best to try and tell the truth.

cafebabel.com: What are the benefits of 'crowd sourcing' for traditional media?

Peter Ludlow: The same benefits from any application of crowd sourcing. Crowds are smarter than individuals. In the case of the media they provide numerous eyes and ears as well as many people that can check information for accuracy. Crowd sourcing is not perfect, but it is a valuable resource for traditional media.

cafebabel.com: In what way should traditional and new media interact and cooperate?

Peter Ludlow: Is there some reason why they should not cooperate in all things? Traditional media can provide a nice layer of analysis and fact checking on top of information gained via new media. There is an important media ecology. New and old media both play crucial roles in that ecology. Both are made better by the existence of the other.