Earlier this month, people gathered outside the Home Office in London to protest the Brook House detention centre. It is one of the 11 detention centres for asylum seekers around the UK, and is being condemned for its awful conditions and treatment of the detainees. Voices at the protest were outcries to close down this house, which is clearly not a home.

It’s midday in Central London and the atmosphere is the same as usual; elegant people rush to grab lunch during their break, crowds of tourists take photos with all the British landmarks.

Nestled somewhere between Westminster Abbey, the House of Parliament and Big Ben, tourists start turning their attention towards something that has become somewhat of a new landmark in the British capital: a protest for refugee rights.

About 70 people gathered in front of the Home Office earlier this month, the official institution to process asylum applications in the UK. The protestor’s demands are clear: shut down detention centres.

In the middle of the crowd, a middle-aged woman is holding a banner that says: “Stop scapegoating immigrants! End the hostile environment! Shut down Brook House!” Her name is Johann and she is 47 years old. “I am here today because I am fighting for LGBTQ [rights]. That’s why, and I’m proud,” she says. 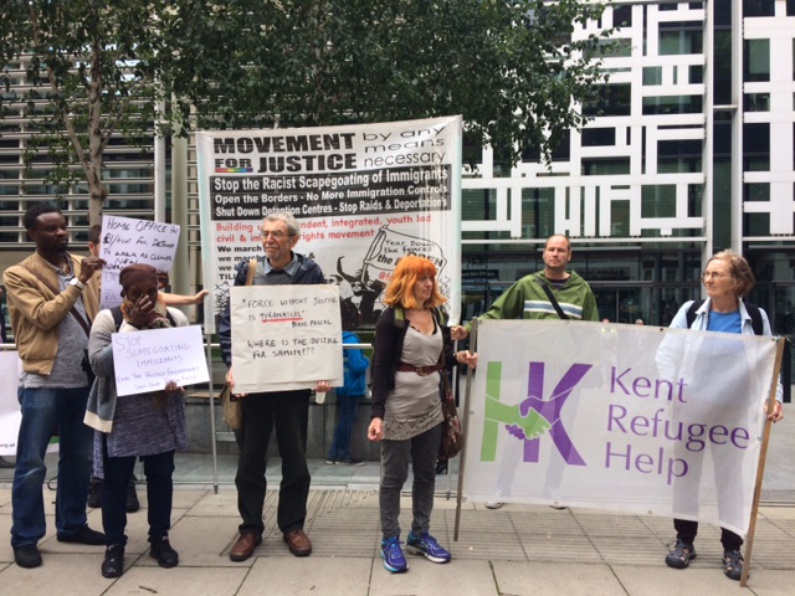 There’s been a rise of about 400% of LGBTQ people seeking asylum over the last five years. Charity organisations estimate that they support around 1,500 LGBTQ asylum seekers each year. Some of them have just arrived; some have been in the UK for years.

It’s been 12 years that Johann has lived in the UK and six since she’s applied for asylum, but her legal status is still not clearly defined.

Brook House is a broken house

According to an analysis carried out by The Guardian in five countries – the UK, France, Italy, Germany and Spain – the UK is one of the worst destinations for people seeking asylum in Western Europe. The analysis was part of the project “The New Arrivals” that included also Le Monde, El País and Der Spiegel, and took into account data and reports of the conditions faced by the new influx of refugees.

Some conclusions of the project were that the UK takes in fewer refugees, offers less financial support, offers substandard housing facilities, doesn’t give asylum seekers the right to work, and many are pushed into destitution and even homelessness when they are granted asylum due to bureaucratic delays.

Those whose asylum status is rejected are waiting to be deported and sent to detention centres.

A BBC Panorama Investigation project recently revealed abuse coming from Brook House Immigration Removal Centre, one of the 11 detention and removal centres in the UK.

“I am fighting for people from detention centres and I have a lot of friends who are detained there, so I was so angry when I watched the BBC Panorama a few days ago,” says Johann.

According to this investigation, detainees are abused, have drug problems, often self-harm, don’t receive medical assistance and many have tried to commit suicide.

Brook House is located close to Gatwick Airport in Sussex, and can house up to 508 refugees. The institution opened in 2009, and is run by G4S – an international security firm that works on behalf of the Home Office.

“I’ve decided to join the protest today because I am completely against any form of detention, against the prison system as well as the UK immigration system. It’s absolutely horrible,” says Anna, a 23-year-old who joined the protest in London to push for refugee rights. “Detention centres have no time limit in the UK. People have no rights in these detention centres; they are treated incredibly badly. It’s an incredible, horrible system. It’s great that people join these protests whenever they can in front of the Home Office to raise awareness of the current system,” she adds.

“We [are asking] to end indefinite detention. There should be no detention at all; detention is very harmful… it’s inhumane. If you are a migrant and you want to open a bank account, you are subjected to more surveillance, more checks, more delays – it creates a process where you can’t even survive. You are treated as a second class citizen,” Sanaz Raji says, a representative of Unis Resist Border Controls, an NGO fighting against the hostile environment. 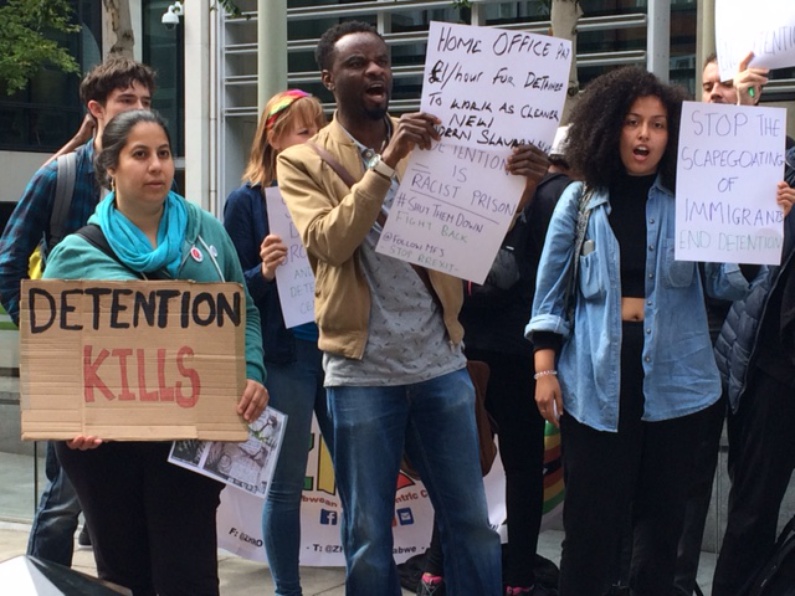 Under new Home Office instructions from March this year, tens of thousands of refugees who have applied to live permanently in the UK are going to undergo an official review to see if it is safe for them to be sent back home.

“I am sure they have tools and policies to treat people like humans. One of our members has just come out of detention last week. They tried to keep people in detention for longer than expected. Some were there for more than two years. But they have to improve the way they are treating people. An asylum seeker is not a criminal, they have to treat us like human beings… You can’t mix asylum seekers with somebody who might have killed, who was in prison and is waiting to be deported,” Sarah Bayisavi, a representative of the Zimbabwe Human Rights Organisation (ZHRO), says.

Ten staff members from Brook House have been suspended after the investigation carried out by the BBC. The director of Brook House, Ben Saunders, has resigned. However, the future of refugees in the UK is unclear, especially after Brexit. Many who voted pro-Brexit justified their choice through anti-immigration sentiments. But at the moment, nobody knows what the status of a refugee will look like after Brexit.