The German 'new wave' theatre director and filmmaker, 37, broaches the history of a divided Germany by moving away from cliches and concentrating on the importance of interpersonal relationships in his third feature film. Released on 19 November, it is based on a true story and set in Hungary in 1988

In 1988, one year before the fall of the Berlin wall, twin sisters Doreen (Friederike Becht) and Isabel (Luise Heyer) are given a chance to go to a young pioneer training camp for athletes in Hungary; both hope to join the rowing team of the German democratic republic (GDR). On their journey to the camp, they meet two young German boys from Hamburg. Despite the camp rules, they cannot resist the temptation to discover the nightlife together. When Doreen inevitably falls in love, her priorities change. Torn between her sister, who is still focused on training, and her personal life, she has to make a tough decision jeopardising the close bond that unites her to her twin. In the context of a Germany torn apart by the weight of its own history, Robert Thalheim’s film Westwind is a true story based on the experiences of the film’s producer.

Thalheim was fifteen years old when the Berlin wall was torn down, and was always passionate about life in eastern Germany, which was then eastern Europe. ‘I discovered another world,’ he says when we meet in Paris, where Westwind is the opening film of the festival ofGermancinema. ‘Everything seemed new, it was fascinating. I had just become an adult. A few of us left for east Berlin, we met people, partied… I grew up in the suburbs and from childhood right up to being an adult, nothing had really changed. East Berlin, on the other hand, had very quickly seen significant changes. It was fascinating. That’s when I became interested in Poland and eastern Europe.’

Germany’s divided history will remain an incessant theme for debate. It has inspired several directors; films based around the nazi period and on the later history of the two Germanys have made German cinema popular. Comedies or melodramas such as Goodbye Lenin! (2002) and the Oscar-winning The Lives of Others (2006) have been significantly successful, except for in Germany. However, Thalheim’s main goal is not commercial success; instead he aims to disprove the cliches. ‘In films, it is always about the tragic issues of the stasi secret police. The GDR is represented as a grey bunker or something which didn’t care about its inhabitants, their shirts and their music. Many eastern Germans do not like The Lives of Others because it does not actually represent the real-life experiences of the GDR’s residents. They did not live with such a feeling of agony, they also had a life. There were several people who went to holiday camps and had some great experiences in the GDR.’

Indeed, the visual atmosphere of the film is far from the stalinist greyness of the GDR, filmed as it was in Hungary, on the sunny shores of Lake Balaton. Germans from the east and the west had the chance to meet each other here amongst the country’s glistening landscapes. ‘For Germans from the east it was a very desirable place. Lake Balaton represented somewhere very exotic for them as they could not easily get to the Mediterranean or the Atlantic oceans. For Germans from the west, it was an ideal place for a cheap holiday. It was a special area with coca cola on the one hand and rebellion against the stasi who opposed contact between citizens of the east and the west on the other hand.’ 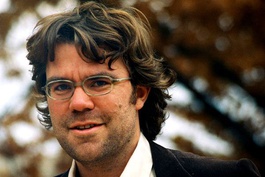 Even today, more than two decades after the fall of the Berlin wall, reunification of the two sides in Berlin has still not been accomplished. ‘I come from west Berlin and my wife comes from east Berlin,’ adds Robert. ‘We do not sing the same songs to our children because we do not know the same ones!’ The director also points out that all the actors cast in Westwind were born after the wall had been torn down; however, it is almost always possible to know if they come from the west or the east.

In Westwind, Robert Thalheim maintains a similar narrative background of his two previous full-length films Netto (2005) and And Along Come Tourists (‘Am Ende kommen Touristen’, 2007). Is it our duty to never forget Germany’s history? ‘No,’ he responds. ‘I studied history. I have always been fascinated by the impact of history on future generations. I also did my civil service in Auschwitz, which made me realise the extent to which history can influence our relationships. The past is never really the past. That is what made me want to talk about it in my films.’ Thalheim now plans to direct two other films, which this time will not be connected to German history, but will instead make us laugh. The first of these comedies will be about a family reconciling work and domestic life.