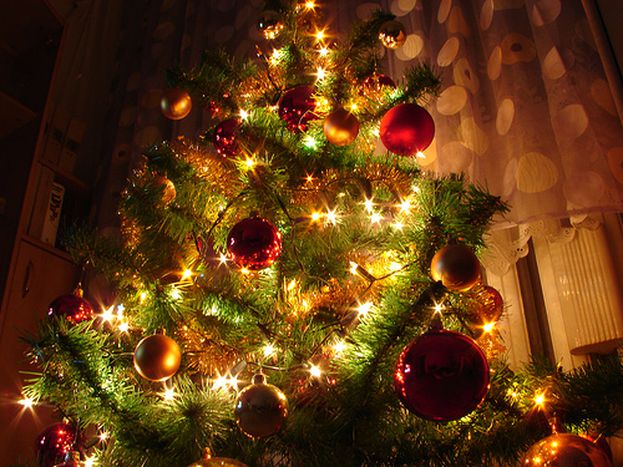 At Christmas, the Poles don't skimp: no less than twelve luck-bearing dishes are served one after the other. Meat is excluded but fish is welcome, and cabbage heads up the ingredients

Imagine nibbling little cinnamon cakes beside the Christmas tree; family reunions in a pastoral atmosphere require effort, full ovens and an intensive period of preparation. In Poland, no less than twelve specialities are eaten on Christmas Eve. In order to attract luck for the coming year, it is essential to eat bigos, carp, barszcz with little ears, kutia, cabbage and mushroom pierogis, herring, mushrooms in jelly and poppy seed noodles. As the birth of Jesus is expected, only dishes without meat are allowed. The table itself represents this expectation: the unleavened bread is placed on hay, as a symbol of Christ in the manger. A closer look at the traditional Polish Christmas Eve meal. 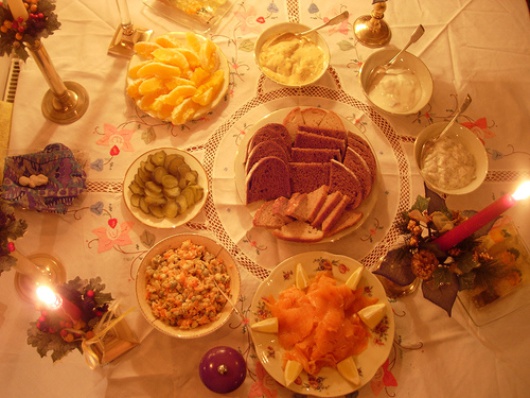 Bigos and pierogis are essential Christmas fare. Bigos is a marinated cabbage dish that must be prepared over several days. Plums, mushrooms and meat can be added. It has a thick consistency and is a dark brown colour which generally does not correspond to the taste, which can be sweet or sour depending on what is added to it.

Pierogis also require cabbage. To make them, first the pastry must be made and then rolled out to a thickness of 4 to 5 mm, before circles are cut out of it with the help of a cup. A spoonful of filling is placed on each circle. The filling is made of marinated cabbage cooked with dry mushrooms, which is put through the blender and seasoned with salt and pepper. Finally, the pierogis are closed and sealed according to methods which differ from region to region. Once this is done, the pierogis are cooked in salted water until they rise to the surface. They are even better when lightly fried, and they can be reheated for several days.

As already mentioned, the dishes prepared for Christmas Eve are made without meat, but fish is very popular. The most typical is carp, which is served in more than 74% of Polish families. According to one superstition, if one keeps a carp scale in one's wallet, money will be plentiful in the coming year. There are numerous recipes: Jewish-style carp, carp in jelly, breaded carp… Other popular fish include herring, salmon and pike. 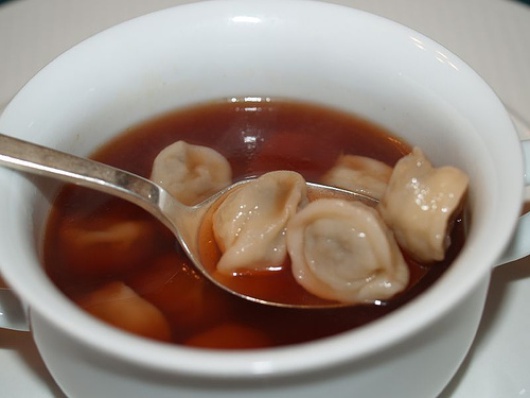 Two of the most well-known soups are red barszcz with little ears and mushroom soup. Barszcz is made with grated beetroot, which is covered with a litre of cold water and cooked until it softens. Then leaven, salt, pepper and lemon juice are added. Particular skill is required to make little ears. The same pastry used for the pierogis is rolled out, cut into squares and garnished with the same filling used for the pierogis. The corners are folded up and stuck to the sides to create the little ears, which are cooked in salted water until they rise to the surface and are served with the red barszcz.

I could mention many other Christmas delights. For those with a sweet tooth, there are all sorts of cakes, principally makowiecs, which are made of nuts, or the very sweet kutia, made of wheat and honey mixed with dried fruit and poppy seeds. Enjoy!

First published on cafebabel.com on 16 December 2008