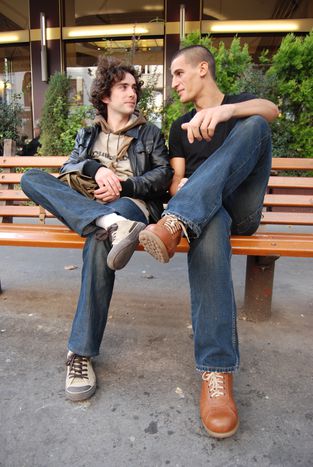 The cultural and political relationship between France and Turkey is ambivalent. Events such as France’s recognition of Armenian genocide and Sarkozy’s opposition to Ankara’s entry into the EU make 2009 a pivotal year

‘Certain political choices have had very negative effects,’ states Uğur Hüküm, journalist for Radio France International and Paris correspondent for the centre-left daily Cumhuriyet. ‘Sarkozy’s stance and that of his colleagues and the National Assembly on the Armenian genocide have made Turks more suspicious towards Europe, and France especially,’ he continues. Has Turkey become stigmatised in the opinion of the French public? The ‘Year of Turkey’ starts in July 2009 and ends in March 2010. Co-organised by the French culture ministry, it will justifiably be looking to restore the tarnished image of the Turkish people, with the help of a series of initiatives.

On the premises of an association located near the Pentes de Crois Rousse district in Lyon, immigrants meet, sip the national drink çay and play okey, a Turkish tile game. They smoke, despite the ban imposed at the beginning of the year ‘This event will promote good relations,’ says Ilyas, 52. ‘Our culture is vast. Its history is ancient: you have only to think of the Ottoman Empire.’ ‘The French know Turkey and the Turks well,’ continues Mustapha, 28. ‘Even Sarkozy knows it, but he doesn’t want it in the EU. Turkey has 70 million Muslims: perhaps he is scared.’

The two men state that Turkey is already at the heart of several events. ‘In Lyon, some cultural centres organise Whirling Dervish performances, oriental parties and debates,’ says Ilyas. Mustapha asserts, without any pretensions, that he is unsure of whether ‘Turkish singers coming here can really promote good relations and integration.’ How many French people visit the Franco-Turkish association? ‘Sometimes someone who has taken a trip to Turkey will come and have a cup of tea and chat for a bit,’ says Ilyas. ‘Then there are those ...’ He repeats himself, as if to reassure himself that occasionally a visitor can shyly penetrate this little corner of Anatolia. 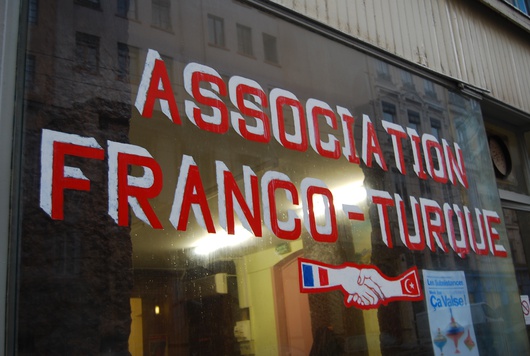 If you look at the culture industry, the French are definitely attracted by and curious about Turkey. ‘In the last five years, editors have translated and published many Turkish authors. In a well-stocked bookshop you can find works by thirty Turkish authors,’ asserts Hüküm. ‘We can remember the success of Nobel Prize winner Orhan Pamuk and that of poets like Yaşar Kemal and Nazim Hikmet, and of romance novelists such as Nedim Gürsel and Elif Şafak.’ The list is long: ‘In music, there is Fasil Say who, with his album and his Mozart pieces, has had great success in the last six years. In cinema, Nuri Bilge Ceylan took away two prizes at Cannes, and there is the young German-Turkish director, Fatih Akin.’

Fake Oddity is a band in Lyon whose singer, Faik Sardag, is originally from Turkey. ‘People could get along just fine, but the media blocks any possibility of making connections,’ he says. With his band he recorded his latest album Runfast in Istanbul, where they also had several concerts. This experience enabled the French members of the group to learn a little bit about the country and its inhabitants.

This project is directed at young rock enthusiasts

An example of successful integration and the potential for cultural exchange, they have decided to get involved in the Turkish cultural season. ‘We have suggested an exchange between Lyon and Istanbul, with some Turkish bands coming to play here, eventually accompanied by other artists,’ explains drummer Fred Bassier, who is busy organising this project. ‘This project is directed at young rock enthusiasts, but we would also like to organise events with Turkish story-tellers for children and parents.’