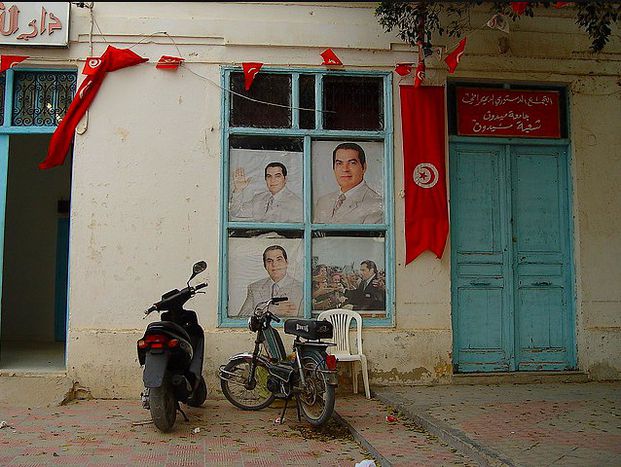 The Tunisians have been hitting the streets en masse since mid-December in protest against youth unemployment and a corrupt regime. The internet world is on hand to help, where its been a longer battle against online censorship and the freedom of opinion

On 17 December 2010 Mohammed Bouazizi set fire to himself outside a town hall in his home town Sidi Bouzid in the centre of the Tunisian republic. He had doused himself in petrol, angry after the Tunisian police has confiscated his only income source, a fruit and vegetable stand, because he hadn't had a license for it. Mohammed Bouazizi died at the beginning of January from his burn wounds. The university graduate was twenty-six years old.

Anger on the streets

On 22 December another young man, Houcine Jeji, killed himself. On christmas eve police officers shot at a crowd of demonstrators, killing an eighteen-year-old and injuring another, who also died of his wounds on new years day. 17 December changed a Tunisia whose people were formerly reigned by hopelessness and the blight of fear over their land. Now they are going onto the streets in Sidi Bouzid as well as in other cities and the capital, Tunis. They are finally giving vent to an anger which has been pent-up for so many years. This anger has many faces and clear directions. The unemployed are out, as are lawyers, students and school pupils. Youth unemployment is at 14% according to official data, but unofficial estimates put the figure at 30%. The citizens are protesting against the lack of prospects young graduates have in the Tunisian job market. They're angry about corruption and the censorship which affects everyday life. They're standing up to a government which seems to have forgotten who it is supposed to be serving.

President Zine El Abidine Ben Ali governs this 'official' republic which seems to have been operating under the aegis of a dictatorship since he took office in 1987. Ben Ali was re-elected with almost 90% of the vote in November 2009. There are no real opposition candidates or parties in Tunisia. Anyone who wants to have a voice has to hold a governent membsership card or at best be a part of the Tunisian first lady's circle, namely Leila Ben. Everywhere you look, from restaurants, shops and the facades of homes, you'll find the image of the president. Ben Ali even changed the consitution himself to be able to candidate again for the position in 2004, by increasing the presidential mandate. The next elections are due in 2014 and proposals to change the constitution are already underway: the clause which states the maximum age of a president must be raised. The 78-year-old Ben Ali must be candidate again.

But we're all seeing the signs now. The president's critics have found their way onto the streets. It's hard to guess how the protests will develop, whether they will strengthen or if fear will triumph. What's sure is that the mass protests against the regime have rocked its deepest foundation. There's already been one immense drawback in a parallel theatre of war, what with the WikiLeaks sympathisers. In the first days of January. they managed to hack ministerial websites and those of the state newspaper La Presse, after the government censored the WikiLeaks webpage. The cyber war which has been swelling dangerously for years is finally coming along. It's a battle for the freedom of opinion; sites like Youtube, Flickr and numerous blogs can't be opened in Tunisia. Facebook has around two million users but all references to events such as that in Sidi Bouzid can't be found.

While the Arab-language news network Al-Jazeera is reporting about Tunisia on a daily basis, the European media is holding back, though some reports say that the US is worse. It's only in France, which traditionally maintains its weak links to its former protectorate, that newspapers like Le Monde and Liberation have put headlines out about the affair. In Germany none of the main medias have spoken about the riots in what is seen as a holiday paradise. From the governmental end nothing has been disclosed yet. Ben Ali must be suspecting his allies: he is suffering at the hands of his European colleagues because in addition to the freedom of the bloggers, his dictatorship has clarified the political islam of this war. He must be hoping that no-one across the Mediterranean pond has noticed that the protests in his country are now about something else.