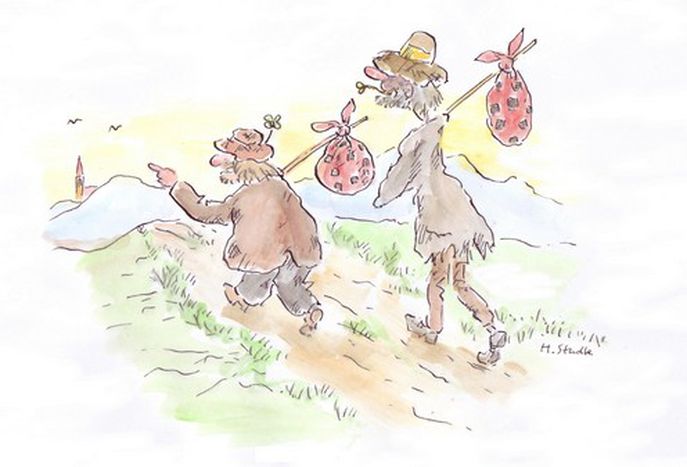 Trace the footprints of the hoardes of men tirelessly 'tramping' to battle across the dusty train tracks of 1800s America, to understand why our fellow man who lives on the street goes by the very British slang name of tramp. During the Great Depression the term evolved into a social description for civil war veterans, rendered homeless and left to survive their own 'gruelling march' through life.

The image of wandering vaguely without a direction, like a vagrant, come from the Latin vagr (Italian vagare - to wander). A Spanish or Portugese vagabundo becomes an impolite Penner in German. Derived from the verb pennen (to sleep), it characterises people who sleep rough. The French and Polish terms clochard and kloszard are derived from the verb clocher ('to limp').

Facial attributes define an Italian barbone (barba = beard), whereas the male hero of Disney's classic animation 'Lady and the Tramp' (1955) is renamed Schnauzer after the German word for 'moustache'.

Homeless people, or bez-domny (Polish), gente sin hogar (Spanish) morphs into the techicality of being roof- or shelter-less: sin techo (Spanish), senza tetto (Italian) or obdach-los (German). The Danish hjem-løs is not to be confused with the German heimatlos, with the romantic broader notion of being someone 'who has no national identity'. The French only have time for quick three letters with SDF, after sans domicile fixe (no fixed abode).