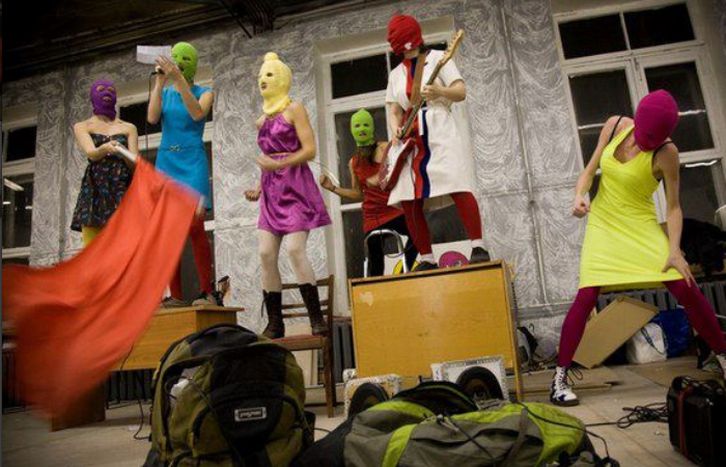 Feminist punks called ‘Pussy Riot’, former paratroopers and joking Ukrainians blast current prime minister Vladimir Putin through their microphones, whilst a friendly Tajik and eurovision-esque duo croon in praise of him. Watch the best of the pro- and anti-future president videos

Russian, feminist, punk: three words that don’t seem to go together. Not so, say the eight anonymous female members of the band Pussy Riot. The collective, who met during opposition protests, formed in October 2011 following Putin’s announcement that he would be running for presidency for a third term in March 2012 (he has already been president of Russia over the course of two successive terms between 2000 and 2008). They’ve won an international following since a performance on the Red Square which saw them arrested mid-January.

The band made up of four male former paratroopers call on Putin to resign, insisting that ‘you are just an official, not a god and not a tsar’. The video of a December performance quickly went viral with over a million views in less than a fortnight.

This gentle parody by Ukrainian band  Dress code (Vova is a pet name for Vladimir), pays tongue-in-cheek homage to some of the former KGB agent’s best-known catch phrases (‘We’ll kill the terrorists in the outhouse’) and publicity stunts, such as catching a fish in the Volga river.

The female duo’s eurovision-worthy pro-Putin song mysteriously shot to the top of the charts when Putin was running for a second presidential term in 2004. The singer plans to dump her bloke, who’s come home drunk one too many times, to find a strong and sober man like Putin.

Joining a plethora of songs in praise of Putin, little-known Tajik singer Tolibzhon Kurbankhanov’s homage to Vladimir Vladimirovich Putin goes further than most and calls the prime minister a ‘heaven sent’ ‘saviour of the people’. It’s become a hit on the net since being posted on 4 February, but interestingly has 6, 000 dislikes to less than 4, 000 likes: is it a statement on the Russian internet user’s politics, perhaps?