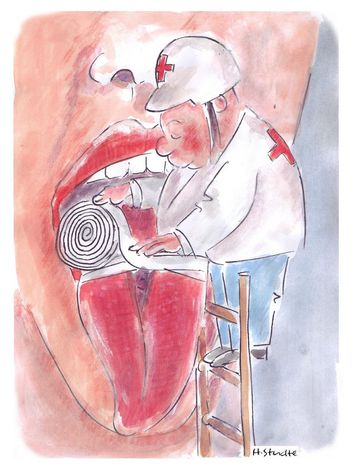 At parties, tongue twisters are simultaneously ice breakers and an indicator of how much someone has drunk. It's not just in beach bars that people wonder: Which wristwatch is a Swiss wristwatch?

The Polish and French virelangue feature 'Jerzy' and a hunter as their respective main characters: Idzie Jerzy i nie wierzy, że na wieży jest sto jeży i pięćdziesiąt jeżozwierzy (Jerzy goes and does not believe that there are 100 hedgehogs and 50 porcupines in the tower), and Un chasseur sachant chasser sais chasser sans son chien de chasse

(a hunter who knows how to hunt can also hunt without his dog).

Italian and German tongue-twisters make use of locations: in South Tyrol, you have to reckon with wandering locals with this sciogli lingua ('loose tongue'): Trentatré Trentini entrarono a Trento, tutti e trentatré, trotterellando

(33 people from Trient come to Trient and all 33 trot). The German Zungenbrecher ('tongue-breakers') is as follows: Im Potsdamer Boxclub boxt der Potsdamer Postbusboss

. (Mate, buy me a coconut. Mate I'm not buying a coconut because those who eat few coconuts only buy few coconuts.)